How Marx is Conquering America

The Progressive Left have been slowly substituting America’s civic heritage with their own delusional ideology, based in large part on Cultural Marxism.

How is this coming to pass?

Author Sarah Hoyt mused recently about the infiltration of society by Marxists presuppositions and worldviews:

“You want to look at the decay of Western civilization?  It’s mostly the unexamined absorption of Marxist ideas.” 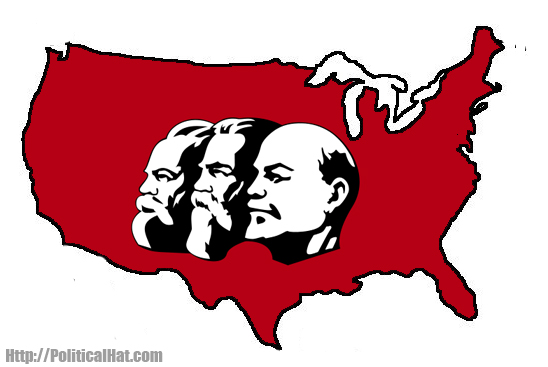 Hoyt’s full article is worthy of reading in full, but it is not through Classical Marxism that the supplantation of that American essence is taken place, but through the Cultural Marxism, from the Frankfurt school to the modern ethnic/sexual/gender/&c. studies programs and “critical theory”:

“This life-line is the totalitarian state itself–a Marxist Utopia. By offering the panacea of the all-knowing and providing State, the totalitarian regime seeks to supplant all the beliefs of the people with the State and its agenda. Cultural Marxism is the tool they are using.

“Now, I’m sure you’ll say that’s communism, or socialism, or fascism. Those are three roads that lead to the same end–totalitarianism–like in Nazi Germany, the former Soviet Union and Red China. All three ended up as totalitarian regimes under brutal leaders–Adolf Hitler, Josef Stalin and Mao Tse Tung.

“Why has America been immune? We haven’t.”

It is because America, and the wider Anglosphere, are so rooted in the rule of law and individual liberty, that the “Superstructure” (as Marx would put it) of society is so antithetical to the ideology of the rabid left.  While in other countries they only need to change slightly to impose their own ideological “superstructure,” it becomes necessary to completely annihilate the culture and traditions of America in order to impost its antithesis.

In order to achieve this end, they adopt a fascist precept: Corporatism.  Or to be more precise, Social Corporatism.  An enemy (i.e. the “Straight White Cis-Gendered Male, AKA, the “Kyriarchs“) is designated, and all others are segregated into their own corporatist elements and organized against said enemy.

People are denigrated into being nothing more than these corporatist units and told that their interest is the pre-determined interest of their group, and in order to achieve their interest, they must abandon all else in order to purge themselves and each other of the “kyriarchy,” and so be “liberated.”

This created an innumerable number of corporatist units with orthogonal values.  Social values cease to have a norm, and even incompatible cultures and customs become equally valid.  When all things are thus “equal” – even those things that are mutually incompatible – and there are indeed a diverse set of incompatible norms and values, we end up with social chaos. Thus, the previous “superstructure” has been destroyed.

But this is clearly untenable.  What fills the void?  Why the utopian fantasies of the modern Progressive neo-Marxist Left!  That is the Meta-Narrative and overarching ideology that is being imposed on us.

Therein lies the paved road to hell that we are hurtling down.  Is it too late to stop?  Do we have any other choice but to try?

One Response to How Marx is Conquering America