One of the Progressives’ oft-used buzzwords is “equality.”  To a large extent they have won the war of words to the point where anything they equate with ”equality” is necessarily good, and those who oppose what the Progressives have equated with “equality” are necessarily “H8ers” who have lost any argument before the debate begins.

The notion of “equality” dovetails with the Progressive’s notion of “diversity.”  “Repair Man Jack” over at RedState sums up what this ends up resulting in:

“This is what happens when a society pursues diversity for the sake of diversity without the leavening or standardizing effect of assimilation… In a society where nobody cleaves to the traditions that the founders laid down, that nice sharp, Bell Curve that clusters tightly around a generally accepted mean gets flattened like a beer can run over by a pickup truck. The deviations become so extensive that nobody can even discern the mean along the curve.

“At this point  you have a Uniform Distribution of social values where nobody’s culture or customs are considered any more valid than say The Donner Party’s. Selecting a jury or conducting a poll of such a population does not produce any wisdom. There is no longer any reference point by which a belief or a decision can be viewed a prudent. The Prudent Man is just another dude.”

The taking of “equality” to such an unthinking degree, has resulted in an “anything goes” attitude that ultimately creates a severe inequality: The alleged dominant culture and norms that must be diminished; and the alleged “oppressed” cultures and norms that must be praised and validated.  Stacy McCain has astutely dubbed this the “Psychosis called Equality.”

When all things are thus “equal” – even those things that are mutually incompatible – and there are indeed a diverse set of incompatible norms and values, we end up with social chaos.  Of course, there are some so enamored with “equality,” that they’d prefer an equality of slavery over and unequal prosperity, and they’d call that “justice.” 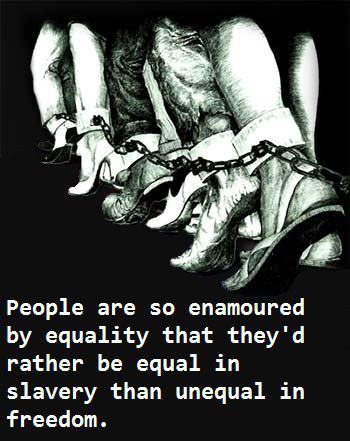 “It is… the tactic of destroying America from the inside out by denying her a common culture. In order for a nation to function, something has to tie the individuals within that nation together so that they feel a common cause with each other. Multiculturalism, which insists that it’s racist to teach Americans a common culture, doesn’t turn us into a charming tossed salad, which was the metaphor the Left used to counter the old ‘melting pot’ idea. Instead, it creates tribalism within America.”

The progressives, then, seek to denigrate that pan-racial civic heritage into but the machinations of a tiny cabal of “oppressors” and “H8ers.”  The situation we are presented with is one that is antithetical to everything that America stands for:

“And yet if we dilute and debase the standard further, if we just bring in several million more diverse people and issue them no requirement to assimilate to any cultural norm whatsoever, this problem will be magically cured? Really? This, in a nutshell, has been my fundamental gravamen for opposing much of Barack Obama’s agenda -the immigration reform bill, the gay marriage push, the fundamental belief that abortion is there to protect his daughters from being punished with a baby.

The only way that incompatible things can be equal is if they are equally valueless.  Therein lies the true purpose of the progressives’ drive towards equality.  By creating a myriad number of “equal” cultures and norms, the Progressives have created a situation where these myriad cultures and sub-cultures are ripe for “coordination” and control.  In other words, a situation is created where social corporatism becomes the only, thus “scientific,” solution.  The “more equal than others” elite, for their own benefit, then coordinate and bring into the elite’s fold these myriad groups, who receive the benefits that the elites have pre-defined for these groups.

Equality is only “equality” if is done according to the dictates of the “more equal than others” elite, just as it is with their definitions of “diversity,” “justice,” and “democracy.”

Nowhere are these Orwellian notions of “equality” better seen then in Sweden.  On one hand, they are trying to achieve “gender equality” by insisting that “gender” is just an evil social construct that must be destroyed.  On the other hand, they encourage “diversity” to the point of cultural suicide.

The perfect example of where the Progressives are taking America is an example of what they have done in Sweden:

“‘The cool and tough immigrant gang asked the woman if she was Swedish. Yes, the woman replied that unfortunately the answer was beaten by such a harsh blow she fell to the ground. The three immigrants liked position and stood over the woman and the words said:

“‘Welcome to Sweden, it is our country, not yours'”

Since the Swedish woman is “privileged” she can not be a victim, even if she is raped.  Conversely, the rapists are considered the victims because they don’t have “privilege.”

Yet in this monoculture of top-down imposed “equality” the Progressives declare it to be a paragon of “diversity.”  The sheer contradiction escapes them:

One Response to Cult of Equality