The Myth of “Privilege”

While the Boston Marathon terrorist attack brought out the best in most people, it brought out the worst from some of the more abrasive minions of the Progressive left.  The basis for this hatred and petty bitterness?  “White Privilege.”

A writer (and assault finger aficionado) over at Salon outright declared “Let’s hope the Boston Marathon bomber is a white American.”  Why did he hope this?  Because according to the writer and the faux Academics of the left have declared that whites (along with straight people, men, and the “cis-gendered”) have “privilege” that allows them oppress everyone.  It is one of the bases of “kyriarchy.” 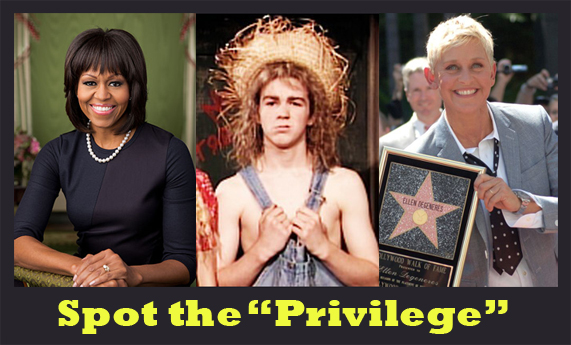 The basic premise is that if the perpetrators were stereotypical white male W.A.S.P.s, no one would blame other whites, while it the perpetrators were not white, the racial group they were associated with would be blamed.  Of course, the “home grown white far-right terrorist” is just such a stereotype, to the point where the Beltway snipers was originally profiled to be a white anti-government nut (both men involved turned out to be black and Muslim).  As James Taranto mentioned, “It’s true that Muslim terrorists are often ‘portrayed as representative of larger conspiracies, ideologies and religions that must be dealt with as systemic threats,’ but only because that portrayal is accurate.”

Ultimately, though, the question of “privilege,” and how only straights, whites, or males can be “privileged,” is the center thesis of the idea of kyriarchy.   While “kyriarchy” has been discussed previously, the emphasis on “privilege” has not.

This following little rant sums up the lunacy of the Progressive left and their obsession about “privilege.”  The blog poster begins by talking about “The Patriarchy ™”:

“This is the idea that in western society most things are geared towards men – that society values the role of men much more than the role of women, and denies women the same opportunities and equality. There are lots of stats around but what is most well-accepted is that there are more CEOs who are men than women, and more MPs who are men, than women. Why is this?”

For people like the blog poster, the answer must necessarily be “sexism.”  Aside from the possibility that men and women may end up naturally tending to prefer different types of roles is society than others, her statement is that because there is not neither an equality of outcome or that there are more men than women, it must be because society is inherently sexist.  But what if there are more women than men?  Would that mean that things are “sexist” and discriminatory against men?  According to the left, that is impossible!  They redefine terms like “sexist” and “racist” such that the terms only apply when it is used by someone in power, and that:

This inevitably leads to a double-standard and true inequality (i.e. the inequality of treatment and inequality under the law).  It also leads to a circular argument: straight, white, and male individuals are defined as the dominators, thus society is necessarily oppressing everyone else, which leads to the un-oppressed being in a dominant positions, and thus the dominators, Q.E.D.

The problem with this is that is paints with too broad a stroke, and enshrines prejudices and bigotry all its own.   This results in a situation that ” It is not possible for women to be ‘sexist’ against men. It is not possible for non-whites to be ‘racist’ against white people,” not because straights, white, and males are uniquely evil as the modern Progressive left implies, but because those terms have been redefined so as to only apply to straights, whites, and males, based on stereotypes and prejudices.  Criticisms by whites, males, or straight individuals is simply dismissed as their “fear of losing their privilege.”

Thus, whether an insult, or act of discrimination, where a person of one race or sex insults or discriminates against another person who is of a different race or sex, is “racist” or “sexist” is entirely dependent on who is what race.  Both situations ought to be considered wrong, but the entire idea of “privilege” means that is can be not only good, but even desirable if it is a white or a male who is on the receiving end.  The result of this is that those who claim to fight against “racism” and “sexism” are in fact the ones who are promoting it, and being able to do so under a certain degree of social acceptability.  That is real privilege!

The typical response to criticisms about “privilege” and “kyriarchy” usually devolve into manichean extremes.  That there are instances of racism, sexism, and discrimination by whites, males, &c., is used as “proof” of society being innately oppressive of non-“Kyriarchs.”  It is also used as en excuse for instances of discrimination where women, non-whites, gays, or transvestites are the ones in control or representative of the dominant culture.  Higher education, where “diversity,” “kyriarchy,” and “privilege” are accepted articles of the Progressive faith, is a perfect example of this, as seen by a survey taken by Sandra Miles:

“A comment by one white graduate student toward the end of the session summed it up well. He described a recent discussion about privilege in a higher education class, when he was shot down after offering his own thoughts.

‘I couldn’t even begin to have that conversation because it was automatically assumed I didn’t understand,” he said. “To go through that experience in a higher education class – which is supposed to be the safest place to talk about that – was just terrifying.'”

“‘I feel that being a white male often makes me a target within the higher ed community,’ one respondent said, adding that he’s been ‘accused’ of being racist and insensitive. Another said he believed a minority colleague resented him for getting a position they both applied for, chalking it up to ‘white privilege.'”

Indeed, this can go beyond Universities and onto businesses and even society at large, as seen by an article in the Harvard Business Review which asks whether men are actually loosing ground:

“The thesis is right, and even white-collar executives are affected, particularly in sectors like marketing or media, where more women have reached the top. But none of those men will speak up, because they recognize the historically strong position of men in the corporate world and, again, don’t want to admit their own weakened position. No man wants to be branded a whiny antifeminist by the growing sisterhood of leaders who are women. So, for example, when a female CEO openly discriminates against a male job candidate, no one says a word. Conferences and events geared toward helping women in business remain commonplace, even in industries where they’re reaching parity with men. Research centers focused on women win grants, but no one demands comparable funding for studies on men. And the National Organization for Men (NOM) in the U.S.—yes, there is one—remains a group that many potential members might be embarrassed to join.”

Perhaps things have gotten to the point where the true social norms are set-up against men.  The “war on boys” has been mentioned previously many times.  This comment to the above mentioned Harvard Business Review article describes this well:

“Men don’t join the conversation now for the same reason that women didn’t in the 50’s.

“In the 50’s if a woman complained about her sexist boss then the entire weight of the organization and society came down on her for not playing her part, and being uppity enough to challenge the real power.

“Now after decades of the government and corporate legal counsel’s actively stamping out sexual harassment a new paradigm exists. If a woman complains about a sexist man then the man is presumed guilty until he can prove his innocence. (usually because the company would rather fire him on the spot rather than risk a lawsuit or government interference in their operations) In other words, “the entire weight of the organization and society come down on the uppity man for questioning a powerful woman.”

“Maybe someday we’ll achieve that actual equality we’ve been seeking, but for now it’s just safer and better for the man to move on to a less dangerous place and continue his career there.”

Beyond the question of men vs. women, the other so-called “oppressive” “privileges” relating to the factors of “kyriarchy” of gender, sexuality, and race are also questionable.  Most biological males are indeed men who like women; most biological females are women who like men.  Western society, like the virtually all societies, are geared to “cis-gendered” straights because the vast majority of people are indeed “cis-normative” and straight, and that is simply reflected in the social dynamics.  Even there, though, the dominant ideology is often one that is set against those “cis-normative” straights.

The question of race is not quite as straight forward, but it nonetheless is favorable to American society and the Western Civilization that is its foundation.  Most peoples are tribal and view the world through a lens of “us and them.”  America has transcended that.  That America has predominantly consisted of white individuals, and indeed was founded by Englishmen with Anglo-Saxon values is not a sign of “oppression” or “privilege” causing/being caused by “dominante;  it is a sign of plain historical reality.  In centuries past, Scots were considered the other, but they assimilated and became simply individuals who are American.  Persons of German and Irish ancestry were the targets of vile hate, yet they in time simply became an indistinguishable part of a single American people.  The list goes on to southern Europeans, Armenians, &c.  America transcends race, which is a rare and precious thing that ought to be preserved, rather then degenerated and torn down into rival racial and ethnic groups.

It is ironic, that it is those who preach against “privilege” and “kyriarchy” who are guilty of what they accuse America of:  The normalization of inequality with some having the true privilege of having those social norms geared towards them, and against others.  Their core ethos is based on promoting and achieving inequality and some having power over others.  The core ethos of America is the capacity to grow beyond such limitations and we are all part of a common American people.