William Jacobson over at Legal Insurrection has a recent post on how “language is destiny, and we have lost the language.” Indeed, defining the terms that we use can be 90% of the battle over not only politics, but the future. After all, how many people would buy Rape Oil if it weren’t called Canola Oil? 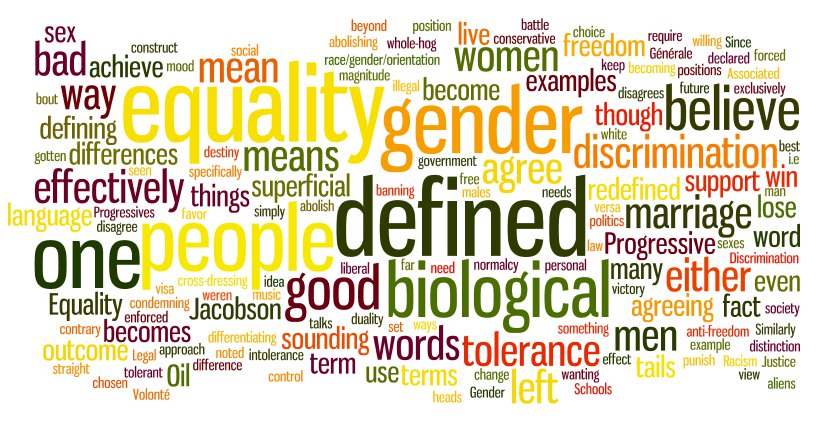 The problem goes far beyond what Jacobson talks about in regards to the Associated Press banning the term “illegal aliens.” There are plenty of examples noted on this blog such as:

There are many other examples. Equality becomes not equality under the law or of opportunity, but exclusively of outcome. Gender becomes something different from biological sex to the point where it can be contra biological normalcy. Discrimination and Racism become redefined such that it become dependant on who is what race/gender/orientation/&c.

For example, “tolerance” has a positive and good sense to it. If one says they believe in “tolerance,” which the left have effectively defined as being specifically endorsing of their political or sociological positions, then one is 90% down the road of agreeing whole-hog with the idea that one should support cross-dressing while condemning attitudes to the contrary. Since “tolerance” has been defined this way, one can be “tolerant” even though they punish people for not agreeing wholeheartedly, while someone who disagrees with them, but is willing to “live and let live” is considered “intolerance” even though they do in fact tolerate those they disagree with.

The choice is either to agree with the Progressive view or say that you oppose good (or alternately support bad) things. Either which way, it’s head they win, tails you lose. Winning the war on words means that you have gotten 90% of what you need to achieve victory on control of society.

This “heads they win, tails you lose” approach can be seen with the use of the terms “gender equality” and “marriage equality.” “Equality” is a good word, and “discrimination” is a bad word. By separating “gender” from biological sex, the Progressive left have declared that “gender” is a “social construct” and that there is no difference between men and women aside from who has what sexual organs. They then say that differentiating between men and women is “gender discrimination” and that abolishing all distinction is “gender equality.” Thus, despite the fact that there are real biological and physiological differences between men and women (i.e. a man is not a woman and visa versa), one has to either say they believe in “discrimination” and effectively concede the argument, or agree that we should achieve “gender equality” and set themselves 90% of the way of proving the left’s position. Similarly, acceptance of the term “marriage equality” means that one is either forced to be in favor of “inequality” or effectively agree that marriage needs to be redefined to abolish the duality of the biological sexes.