For Cory Booker, though, it is a matter of “local and national food justice initiatives and policy that will ensure that everyone can enjoy the freedom to eat enough.”  While to many this sounds innocuous, it is really anything but.  The blogger zombie has laid out how “justice” has been turned into nothing more than a Progressive dogwhistle. 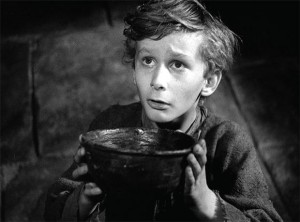 The first corruption of the word “justice” began with the Progressive’s mutation of St. Thomas Aquinas’ call for compassion for the less fortunate, to a call for a totalitarian redistribution of society to fit the left’s utopian fantasies.  From Þe Olde Wikipedia:

“A socially just society is based on the principles of equality and solidarity, understands and values human rights, and recognizes the dignity of every human being.  Social justice is based on the concepts of human rights and equality and involves a greater degree of economic egalitarianism through progressive taxation, income redistribution, or even property redistribution. These policies aim to achieve what developmental economists refer to as more equality of opportunity than may currently exist in some societies, and to manufacture equality of outcome in cases where incidental inequalities appear in a procedurally just system.”

While everyone sharing equally sounds egalitarian and spiffy, this state of things would require, in the words of former President Ford, a “government big enough to give you everything you need, is a government big enough to take away everything that you have.”  When you are dependent on the state for food, it is the state that determines what you can and can not eat, to the point where one Chigaco school actually limited some lunches to less than 200 Calories!  And the only choice is to eat what you are given or starve.

That then is the crux of what the Progressive’s mean by “justice”: The destruction of prosperity and an “equal” rationing of anything and everything (though some are some who are more “equal” than others…).  Perhaps the description of this “justice” can best be summed up from left wing lunatic John Rawls:

“Rawls claims that the parties in the original position would adopt two such principles, which would then govern the assignment of rights and duties and regulate the distribution of social and economic advantages across society. The difference principle permits inequalities in the distribution of goods only if those inequalities benefit the worst-off members of society. Rawls believes that this principle would be a rational choice for the representatives in the original position for the following reason: Each member of society has an equal claim on their society’s goods. Natural attributes should not affect this claim, so the basic right of any individual, before further considerations are taken into account, must be to an equal share in material wealth. What, then, could justify unequal distribution? Rawls argues that inequality is acceptable only if it is to the advantage of those who are worst-off.”

This ideology assumes many fallacies.  The first of which is that it assumes that it is unjust for a person to have more than another.  Just as long as the person who has more did not gain it by taking it from a unwilling person without, then there is no injustice; for wealth is not a zero sum game and one becoming rich does not necessitate taking away from others.  To the contrary, those who are responsible for the creation of wealth create the conditions and money that allows the poor to rise above their previous station.  To that end, the free-market economy, which has seen the greatest and broadest creation of prosperity the world has ever seen, is actually just, even under Rawl’s nonsensical philosophy.  It’s been posted before, but it bears repeating: Baroness Margaret Thatcher said it best:

Thus, the entire “food justice” initiative is based on the assumption that it is more “just” to ration breadcrumbs, than for an entrepreneur to grow more wheat and make more bread.

Perhaps the most frightening thing is the Mayor Booker may very well become New Jersey Governor, or barring that, Senator.  From there he could reach for the Presidency.  With a demeanor that is less acerbic than that of President Obama, crypto-Progressive Cory Booker can truly force his unjust “justice” upon a trembling and starving nation.