You can’t have “Anti-Gay” Bullying if Everyone is Gay!

Under the guise of “anti-bullying,” thirteen and fourteen year old girls have been bullied and forced to ask for a “Lesbian Kiss.”

“During the workshop for girls, the 13 and 14-year-olds were told to ask one another for a lesbian kiss. They were also taught words such as ‘pansexual’ and ‘genderqueer.'”

Unsurprisingly, the schools gave the parents “no warning about the presentations, nor an opportunity to opt out” and that “college students were granted the right to come into the classroom and encourage her daughter to be sexually active.” 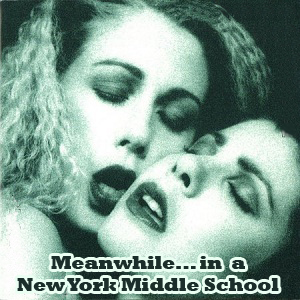 Subsequently, the school has claimed that “the sessions were rather about saying no to unwanted advances as opposed to encouraging homosexual acts.”

But then, we’ve heard that line before…

Update: The veritable Ace, over at the Ace of Spades HQ, pretty much hits the nail on the head when it comes to the modus operandi of the left and the so called “equality” movement:

“There is a very real suspicion, held for good reason, that anything that is not illegal in a socialist state will be mandatory. That is, there are only two categories of actions: the illegal and criminal, and the mandatory and coerced. Only What the State Forbids and What the State Compels.

“You cannot demand that someone afford you the right of liberty while in the same movement stealing that very thing from everyone else.

“How about this for an insane idea: Just as people have the right to be gay, other people retain their right to not be gay.“

One Response to You can’t have “Anti-Gay” Bullying if Everyone is Gay!