The Failure of Multiculturalism

The “youth” rioting that occurred in Sweden is proving that the Progressive utopia will be destroyed by the very same dreams of the broader Progressive movement:  Open boarders, multiculturalism, and a generous welfare state. 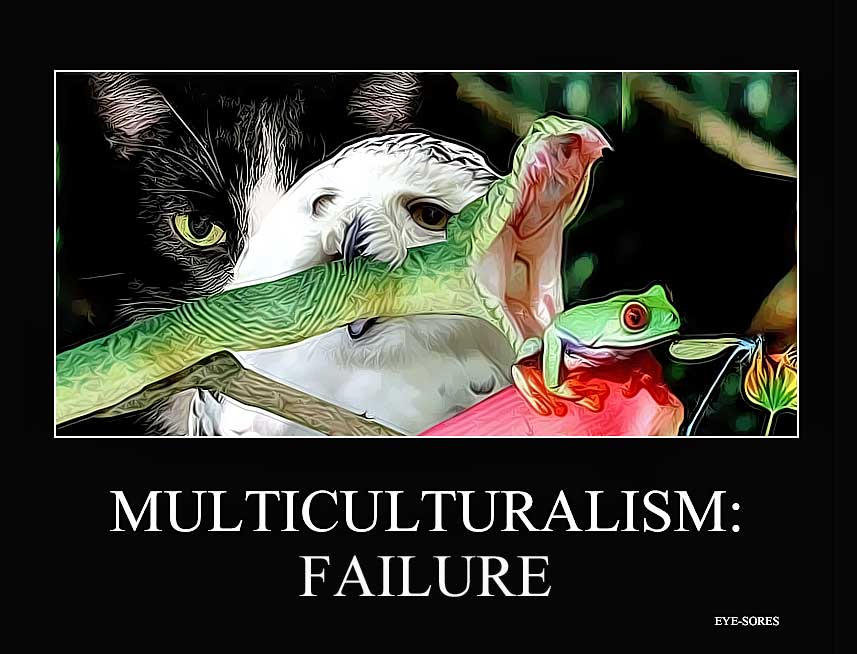 The drive for multiculturalism results in de facto segregation for Sweden’s immigrant population.  Compounding this, the generous welfare state works against integration.  The superficial claim for “diversity” and inclusion ultimately boils down to the “multi-culti” Swedes having an “us and them” attitude.  Is it no wonder, then, that the immigrants don’t want to integrate?  Yet the Swedish “multi-culti” advocates openly wonder why the people they treat as being culturally different… act culturally different and refuse to work, pat taxes, &.!

Sweden provides all of the physical things the immigrants need, but refuses, or is unable, to provide a culture that wants people to belong and is worthy of belonging to, thus “[f]rom the point of view of immigrants, therefore, the Swedish state is warm and generous, but Swedish society is cold and distant.”  In large part this comes from the nature of the welfare state:

“Immigrants who have recently arrived lack country-specific human capital. This includes language skills, labor-market experience, and cultural knowledge. In the United States, recent immigrants typically earn less than natives do, but they experience faster wage growth as they accumulate work experience and skills. Immigrants eventually tend to catch up.

“In the Swedish welfare state, people live comfortably even if they are unemployed. This means that few are willing to accept low-paying or disagreeable work, preferring to live on welfare until something better shows up. But immigrants who never enter the labor market rarely catch up to natives in skills.

“Immigrants who do not enter the labor market remain isolated from Swedish society. Integration is not only a question of work. It is also about getting to know the natives and learning their customs. This is difficult for unemployed immigrants, who tend to live in segregated areas and often have not once set foot in the home of a native Swede. The generosity of Swedish welfare thus paradoxically traps many immigrants in permanent exclusion from the labor market and, by extension, from society. In segregated neighborhoods, not working eventually becomes the norm through social osmosis, creating a vicious cycle that carries on into the next generation.”

It is not the welfare state alone that causes this problem, but the self-loathing of the Progressives towards the very culture that tolerated their existence in the first place.  As the veritable “Comrade Arthur” over at the Ace of Spades HQ points out:

“If you were a relatively uneducated unemployed immigrant living in a ghetto, and all you heard all day was that the country you lived in (and the race of people that constituted the majority) were just Terrible Sinners Deserving of Punishment and you, on the other hand, were an Angel From Heaven Who Just Needed to Be True to Himself, what would you end up thinking?”

“Which culture would the young immigrant men choose? They have two bad choices: The culture which seems to run contrary to their impulses, generally looking down on masculine virtue, or the one which promotes a ridiculous version of masculinity as little but Warrior-Tribe aggression displays, violence, and rape. And of course some rioting, and of course some terrorism and slaughter, too.”

Much like how pre-Revolutionary France created the situation that lead to the revolution that destroyed it, the Swedish Progressive ethos is setting up Sweden for decline and fall.  Already we see an extreme version of this taking place.  During the riots the police were told to do “as little as possible” to stop the rioters.  However, the police actively round up those few Swedes who stood up to defend themselves against the rioters.  This shouldn’t be surprising, though, since the Progressive mindset is all about tearing down society in the hopes of building their utopia, being completely oblivious to the fact that the immigrants they use for this end do not share the same utopian dream as they… though the Progressive’s may have different plans for them…

Why the contradiction? James Taranto explains:

“Multiculturalists are no less prone than other human beings to be hostile to out-groups. It’s just that they are willing to accept almost anyone foreign, or otherwise identifiably different, into their in-group. The only out-groups they readily recognize are familiar, domestic ones, like the ‘other communities’ that… ‘don’t have to deal with the idea that lots of communities of different people have to coexist.'”

The rest of Western Civilization may not be far behind.  Not even the United States is immune.  The Boston Bombers are proof enough for that.

This entry was posted in Progressives and tagged Energy, FAIL, Social Justice. Bookmark the permalink.