Corporatism of the Obama Administration

An old pejorative accusation of the left has been that conservatives, libertarians, Republicans, &c. are “corporatists” and thus fascists.  How are they considered “corporatists”?  Because they support the free market, which somehow means favoring big businesses above others, and thus the big businesses “buying” of the government to control it.   They misconstrue the quote that “corporatism… is the merger of state and corporate power.” 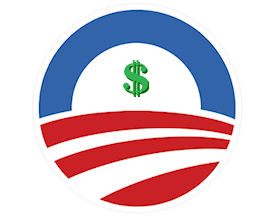 Corporatism is not the “evil corporations” controlling the government and people, but the subsumation of business, labor, and all others into the state, for the state to direct for its benefit, and thus the alleged benefit of all parties involved.  It is when the government coordinates with these groups to achieve a desired goal.

The Obama administration demonstrates exactly what corporatism is, and what it can do.  Google’s chairman is investing millions of dollars to help expand what Obama’s re-election campaign did with Narwhal, for the exclusive benefit of Democrats.  Google’s affinity for the Democratic party is well known, and its chairman openly creating a partisan electoral machine does nothing more than bring “the merger of state and corporate power.”

Of course, it goes much deeper than that.  Obama’s EPA director, Lisa Jackson, worked in the private sector, but was brought on board the EPA as one of Obama’s confederates because of their shared Progressive values.  After doing her stint in the administration, Jackson is landing a cushy job in charge of Apple Computer’s “renewable energy directive.”

This cycling between corporate elite, and political elite quickly erases the boundaries between corporation and state, until one blends softly casual into the other.  It is basically the corporatist/socialist equivalent of “interlocking directorates.” The corporate leaders become political agents to be utilized by the government, and in response those companies are looked upon kindly by the government, which in turn rewards the leadership with prestige and money.

Ultimately, though, it is a case where “all the political, economic, and spiritual forces of the nation, organized in their respective associations, circulate within the State.”