From Technical Ecstasy to “I Can Haz Socializm”: A Stand Alone Complex

Less than 20 years ago, the “internet” played practically no role in election campaign, or even in the wider areas of the culture, such in entertainment, news, and, to a large degree, education.  While the way that the Progressive bastions of entertainment industries, mainstream news, and public education mutually reinforce each other and their common goal has been gaining more attention, the same is less true to how the internet and other communications technologies and tools.  The broader and easier the ability to readily communicate, can allow different aspects of electoral campaigning, from the analysis of data to the appeal to low information voters, to be unified into a powerful tool. 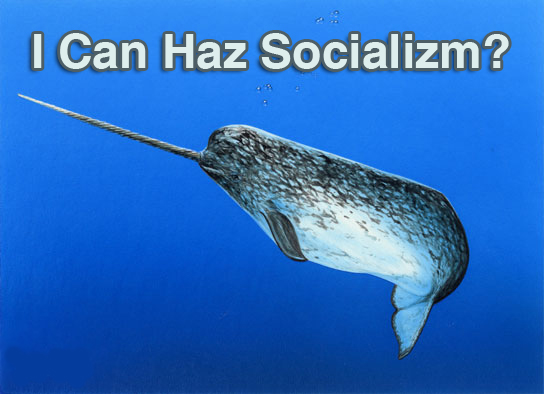 The Obama campaign’s success with “Narwhal” (and Romney’s failure with “ORCA”) is well known by now.  While Narwhal allowed the Obama campaign to compile and utilize information in its appeal to voters, it was not the be-all end-all of Obama’s tech-savvy campaign, but a skeleton the underlied a much larger, and successful, assault on America.

The technical gap between the Obama and Romney campaign has been noted previously, but recurrent reminders are always a good thing.  Just what did the Obama campaign build with Narwhal?  Narwhal was “was the architecture of the company’s sophisticated data operation. Narwhal unified what Obama for America knew about voters, canvassers, event-goers, and phone-bankers, and it did it in real time.”  But it was not just a tool for the campaign staff, but a way to turning the average low information voters that the staff was trying to communicate with into de facto campaign workers themselves.  In effect the “tech team’s key products — Dashboard, the Call Tool, the Facebook Blaster, the PeopleMatcher, and Narwhal — made it simpler and easier for anyone to engage with the President’s reelection effort.”  The way they organized is illuminating:

“To really understand what happened behind the scenes at the Obama campaign, you need to know a little bit about its organizational structure. Tech was Harper Reed’s domain. “Digital” was Joe Rospars’ kingdom; his team was composed of the people who sent you all those emails, designed some of the consumer-facing pieces of BarackObama.com, and ran the campaigns’ most-excellent accounts on Facebook, Twitter, Tumblr, video, and the like. Analytics was run by Dan Wagner, and those guys were responsible for coming up with ways of finding and targeting voters they could persuade or turn out. Jeremy Bird ran Field, the on-the-ground operations of organizing voters at the community level that  many consider Obama’s secret sauce. The tech for the campaign was supposed to help the Field, Analytics, and Digital teams do their jobs better. Tech, in a campaign or at least this campaign or perhaps any successful campaign, has to play a supporting role. The goal was not to build a product. The goal was to reelect the President. As Reed put it, if the campaign were Moneyball, he wouldn’t be Billy Beane, he’d be ‘Google Boy.'”

The data harvesting allowed the Obama campaign to directly target voters with specific messages, effectively treating people as a target group, or demographic, of one, in a way that was both efficient and cost effective.  It came across not as an attempt by a campaign to motivate an uninterested voter, but to get the people they were targeting to themselves become the motivator.

But the success of connecting with people with data mining and targeted appeals is only half of how Obama, and the Progressive left in general, have been successful in utilizing technology and the internet.

The way to motivate low information voters isn’t to educate them, as if shouting the entirety of “The Road to Serfdom” will somehow transform them into rabid political junkies you just happen to share your views.  The way to target these voters, and the public in general, twofold: Fold it in with other things so that it becomes a natural part of a persons experience and overall view of the world; and secondly, keep the messages short and effective.

As William A. Jacobson over at Legal Insurrection points out, combining “the culture” with the sometimes subtle inclusion of political viewpoints, often crouched in simple mocking terms, works.  Prof. Jacobson points out an excellent example of this: Upworthy.

Unworthy superficially comes across as one of so many sites with pithy articles and bit-sized vapid posts about pseudo-amusing content that are just mild and inoffensive seeming content.  To anyone with even a small bit of familiarity, it is clear that Upworthy is a highly left-wing purveyor of Propaganda.

Examples can be seen by superficially innocent sounding posts with titles like “This Makes Homework Look A Whole Lot Easier,” which links to an image macro touting class warfare and condemning the “98%, or a post with the title “10 Amazing Honeymoon Spots That May Not Last As Long As Your Marriage,” which links to a global-warming alarmist video!

What the website does is simple.  It puts otherwise innocuous picture on its front page along with non-offensive titles.  These then link to the individual pages where a short one or two sentence (and often leftist) comment is given by the poster along with some bite sized content like a short Youtube video or an image macro.  Before actually getting to that content, a push”poll” pops up asking if you agree or not; if you do, then you are prompted to sign up with your e-mail and zip code to be kept informed.  throughout the website, you are prompted to tweet the post or “like” it on Facebook.  The site makes it very easy to share content, in effect turning the casual web surfer into an online precint walker or phone banker.  Instead of motivating a handful of walkers or phone bankers, Upworthy gets countless people to do the same thing with only a click or two of a mouse button or touch-screen.  These casual visitors thus become force multipliers and make it seem that the proffered message is a widespread and popular one, even though it is only being strongly pushed by but a small number of individuals.  The genius of this is that by making it so integral with their experience and routine, they don’t even notice that they are engaging in politics, since it is just a small part of everything else they do.

One of the reasons these approaches work is because they are not crouched in terms of a direct political appeal, nor do they try to convince people with a lengthy logical discourse.  As the veritable Ace over at the Ace of Spades HQ points puts it.

“And hence, any message that presents an extremely simplified take on things which reassures your average dumb, low-information person that he Knows Everything if He Just Repeats This One Stupid Meme and Laughs At the Right People is naturally going to be a Big Seller in the marketplace of ideas.”

In effect, if you have to explain your position, you’ve already lost the argument.

What results from this, the combination of the finely tuned technical ecstasy of an effective technology infrastructure and the popularity of silly internet memes, is a broader and more diffuse movement that is not run by a single person or campaign.  In other words, it is a “Stand Alone Complex“:

“While originally intended to ‘underscore the dilemmas and concerns that people would face if they relied too heavily on the new communications infrastructure,’ Stand Alone Complex (スタンド・アローン・コンプレックス Sutando Arōn Konpurekkusu) eventually came to represent a phenomenon where unrelated, yet very similar actions of individuals create a seemingly concerted effort.”

In effect, the ideas and efforts of many are allowed to influence each other and to reinforce each other in such a way that they are drawn towards a similar direction.  The problem is that this is not just a single campaign, but lots of groups strengthening each other and directing each other towards a certain direction, and then towards particular goals that become achievable once we’ve all gone down that direction, whether we realize it or not.

The difficulty in combating this is that it can not be done by a single person or group of persons.  The best we can do it to set the conditions right such that they are conducive towards the creation of a Stand Alone Complex of our own.  Obama with Narwhal did not create everything that contributed towards his re-election, but took advantage of a Stand Alone Complex that was already developing.

There is much that the right can do to emulate, or perhaps even eclipse, what the broader left have done.  Certainly creating an efficient system like Narwhal would be part of that.  Being able to cull data and target specific voters; use of market testing and behavioral psychologits to tailor this outreach to appeal to people on our side, or even how to sway people to our side to begin with; and creating a broader multi-platform system that does not just motivate people to turn out for elections, but in effect recruit people to do that.  While such a system is requisite, it can not work unless many others are already inclined to take advantage of it.  People will take advantage of it is easy to take advantage of, and if they feel that are being empowered by the tools.  In other words, they do not feel like they are being used by the campaign, but that they are using the campaigns tools to do stuff themselves, and effective early prompting creates a situation where people prompt themselves, and prompt others to take advantage of the tools proffered to them

People will only take advantage of it if they are inclined to do so.  Convincing people can not really be done by a single individual or campaign, but requires those ideas and beliefs become a natural part of the background, i.e. it must feel normal.  Forwarding a short political youtube video, liking a short “news” article, or tweeting a political phrase must become no different than forwarding some LOLcat image macro. Indeed, it becomes necessary to “fight against the left’s permanent infrastructure, which is one that embodies a nexus of politics, media and culture combined. The power of cultural memes and viral messaging to counter political ideology doesn’t just happen autonomously. To speak to the low information audience today, you need to create the infrastructure of the future.”

We can appeal to people by utilizing simple, interesting, and/or funny posts, videos, or memes that are interspersed with other mundane things.  People don’t want to become fully informed about politics or get into the details; by making it easy for people to do something or make a small contribution, you avoid that problem because it doesn’t seem as if they are being especially political, but just normal and routine. Political ideas and memes must be subtle and made part of the culture; political opinion ought to be mixed in with other cultural stuff as if it were just common sense fact, which is advantageous to the right since the facts are facts.

This can only happen when many different people are working towards a similar goal, and can thus self-coordinate messaging based on the self-coordination of others.  We must contribute to an environment where liberty, virtue, and American values are normal and shared as easily as a picture of a cat and a cheeseburger with “I can haz cheezburger” text.

tl;dr: Create an effective tech infrastructure, campaign on simple and easily graspable memes, and create the conditions suitable for a Stand Alone Complex.

This entry was posted in Elections, Progressives, Science and tagged Democrats, GOP, Science. Bookmark the permalink.

One Response to From Technical Ecstasy to “I Can Haz Socializm”: A Stand Alone Complex