Most people when they think of Marxism, think of the Soviet Union and its abject failure.  Indeed, most people feel that Marxism is not a threat… even the Communist Chinese have embraces Capitalism, of a sorts.

Marxism, though, is not only still a threat, but is on the verge of (if it has already not achieved) overthrowing the West.  It is not the classical Marxism that focused on economic aspects, but cultural Marxism, which focuses in on immanentizing the eschaton by cultural and social upheaval. 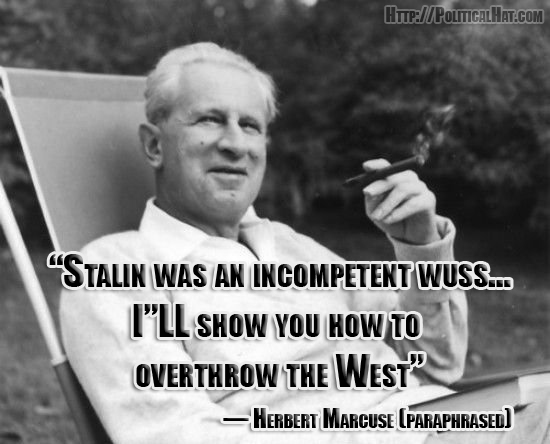 It is important to out the modern-day proponents of Cultural Marxism and out them for what they are: Agents of tyranny and mutation, who seek to overthrow society and erect their utopian visions in it place, much like their bloodthirsty intellectual ancestors, the Jacobins.  Lee Stranahan helpfully expounds upon this, and swats away pathetic attempts to undermine the truth.

“So, without stammer or hesitation: Cultural Marxism is a branch of Marxism advocated by the Frankfurt School of philosophers such as Erich Fromm, Max Horkheimer and Herbert Marcuse that focuses on cultural factors as agents for social change, as opposed to the traditional Marxist view that focused on economic factors.”

It is from these Cultural Marxists that “Critical Theory” was born.  The Stanford Encyclopedia of Philosophy defines it as such:

“Critical Theory” in the narrow sense designates several generations of German philosophers and social theorists in the Western European Marxist tradition known as the Frankfurt School.

Andrew Breitbart put it succinctly when he wrote:

“Marcuse’s mission was to dismantle American society by using diversity and ‘multiculturalism’ as crowbars with which to pry the structure apart, piece by piece. He wanted to set blacks in opposition to whites, set all ‘victim groups’ in opposition to the society at large. Marcuse’s theory of victim groups as the new proletariat, combined with Horkheimer’s critical theory, found an outlet in academia, where it became the basis for the post-structural movement–Gender Studies, LGBT/’Queer’ Studies, African-American Studies, Chicano Studies, etc. All of these ‘Blank Studies’ brazenly describe their mission as tearing down traditional Judeo-Christian values and the accepted traditions of Western culture, and placing in their stead a moral relativism that equates all cultures and all philosophies–except for Western civilization, culture, and philosophy, which are ‘exploitative’ and ‘bad.'”

If we are to stop them, we must understand them.

There are many criticisms of Cultural Marxism and the Frankfurt School.  Below, however, is one of its founders explaining it in his own words, so as to dispel any notion that it is anything but what it is:

This entry was posted in Progressives and tagged Communism, Kyriarchy, Leviathan, Social Justice. Bookmark the permalink.