A core concept of the Progressives’ version of “Justice” is an equality of outcome, and egalitarian principles that we are all equally the same, and that all differences are unjust and false.  As such, since all are equally deserving, “[e]ach member of society has an equal claim on their society’s goods… Natural attributes should not affect this claim, so the basic right of any individual, before further considerations are taken into account, must be to an equal share in material wealth.” 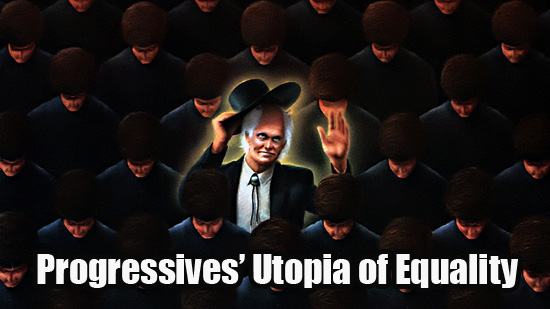 Any inequality, then, is considered an unfairness that must be corrected.  Those who have more must have only gotten more due to “privilege” due to accidents of nature or of luck, and that “privilege” is used to oppress and keep others down.

The origin of this is a rather oversimplified version of Marx’s labor theory of value, where the value of production is based solely on the amount of labor that went it.  Thus, if one person has more than another, it must be because the rich stole from the poor through oppression and/or exploitation.  Economic inequality, therefor, is unjust and people must be made economically equal.

Cultural Marxism extends this to the whole human person for all aspects of society.  For example, if there are more male engineers than female engineers, then it must because society is used to oppress women and protect the men’s “privilege.”  It is because of the assumption that any unequal distribution amongst any distinction is because of the oppression of the “privileged” that even if there is no observable discrimination, it must still be the fault of discrimination.  Even lack of observable discrimination is shown as proof that there is a pervasive cryptic discriminatory and oppressive conspiracy going on.

So obsessed are the Progressives with the equality of outcome and their utopian dream of a perfect egalitarian society, that they are willing to actually engage in the discrimination that they accuse society of perpetuating!  This, of course, is blamed on “Kyriarchy” and the intersectionality of oppression by a cabal of the privileged elite.  Since these “Kyriarchs” are always the perpetrators of discrimination, they must be discriminated against to destroy their “privilege” in order to achieve non-discrimination!

While is it good and proper for the law to apply equally to people, and where people can find equal protection under the rule of law, it does not mean that all people are equivalent in all measures, only that as far as the law is concerned, some differences do not matter.

For the rabid Progressives, this is not enough.  When they say all people are equal, they take it to the point of ludicrousness!  And they will enforce this “truth” of theirs through whatever unequal means they need to in order for everyone to be knocked down to the lowest possible denominator.

As was previously noted, “Social Justice” advocates in the student government of the University of Georgia, demanded that we eliminate the celebration of the successful and to banish success stories from society.  They see it as “unfair” that one person is successful, while others do not achieve greatness.  The only “just” outcome is for there to be no successful individuals.  Only the collective society can be successful, and all individuals benefit and become successful by being a part of that successful collective.

In another case, pseudo-Academics have declared  that “smartness” is an ideological system and particularly explores the ways in which it intersects with whiteness as ideology… [and] that smartness works as a form of property, with all the advantages that come with membership in the group.”  They argue that “smartness” is oppressive and that it is false and oppressive that some are considered “smart” and succeed while others are not.  For these people, the “smart” only benefit because they have “privilege” and  exploit the “smartness” of society at large, to the detriment of others.  In other words, everyone is equally smart, but the “privileged” use the idea that they are smarter than others to oppress others to perpetuate their own “privilege.”

This insanity even goes to basic biology!  Because a gay couple can’t conceive a child naturally between them, it is only because the “privileged” hetero-normative oppressors keep them oppressed!  The only “just” thing would be to give them infertility treatments (even if neither is infertile) to correct the oppression of nature and biological science so that there is an equality of result and everyone can have the same thing!

Jonathan Gruber, one of the main architects of Obamacare has even gone so far as to declare that those who are healthy have been genetic “lottery winners” and their not having to pay for expensive medical bills is unfair as they are paying an “artificially low price.”  The irony is that people are unequal when it comes to some people having a genetic disease or not.  This genetic reality is declared to be “discrimination” that the state must “correct.”  What is artificial is taking “from each according to their ability, to each according to their need.”  Yet to the delusional Left, scientific reality is just a form of “privilege” and that without this “privilege” everyone would be equal.

This “Cult of Equality” goes beyond the smashing of social norms and utilizing the chaos of orthogonal beliefs and characteristic in order to reorganize society along hyper-normative lines via Social Corporatism.  It is a truly an obsession with Borg-like equality.

And what of those who are “more equal than others“?  Even the Borg ended up having a Queen to organize and direct the oh-so-equal collective.

One Response to The Equality Obsession