Where do babies come from?  For most sane and rational people, the answer is that a man engages in reproductive sex acts with a woman.  The California Grand Soviet Legislature, however, doesn’t seem to understand that:

“A bill signed into law by California governor Jerry Brown on Tuesday ensures that insurance coverage for fertility treatments granted to heterosexual couples will now be extended to unmarried and homosexual couples.

“The law was authored by Tom Ammiano (D., San Francisco) who thinks that denying fertility coverage to unmarried and gay couples violates California’s non-discrimination laws. ‘Reproductive medicine is for everybody’s benefit,’ Ammiano said in a statement. ‘To restrict fertility coverage solely to heterosexual married couples violates California’s non-discrimination laws. I wrote this bill to correct that.’ Insurance coverage for fertility treatment usually kicked in only after couples attempted natural conception for a year.” 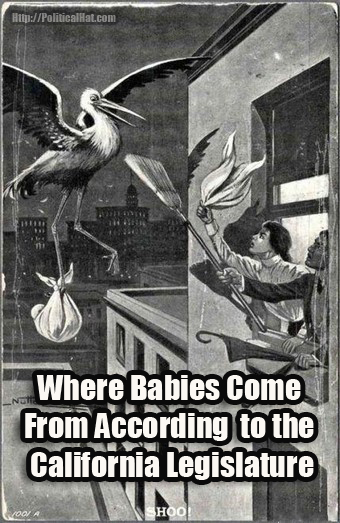 “Infertility – the state of being unable to produce offspring – is defined in state law. Under current law, insurers are required to offer coverage for infertility and, when purchased, that coverage is subject to non-discrimination in insurance laws.”

No.  That is not how making babies work.  Two people of the same sex can not conceive a child.  This is not infertility.  This is biological reality; this is NORMAL.  It has to do with the most fundamental differences between the sexes.  A lesbian couple or a gay couple will never be able to have a child between them because they are biologically incapable due to the fact that they are both of the same sex.

Previously, insurance coverage would not “kick in until couples have tried to conceive naturally for 12 months. That’s not possible for same-sex couples.” Well DUH!!!

This is a difference between same-sex and opposite-sex couples.  When it comes to making babies, gay couples are fundamentally unequal to straight couples.

This isn’t “H8” or animosity.  This is basic biological reality.

The fact that two people of the same sex can’t have a baby does not prove that either is infertile.  The same-sex couple choose not to engage in reproductive acts.  The ability of either one to not be able to produce offspring is not a disability or a medical problem to be addressed.  It is normal and natural that two people who don’t engage in reproductive acts won’t actually reproduce.

This would be no different than if a man and a women were deemed “infertile” for trying to have a baby while only engaging in sodomy and oral sex!

It begs the question:  If the rabid Left so believe in “equality” that they are ready to pass a law that blatantly invalidates reality itself, what other delusions are they foisting upon us all?