Glaciers aren’t just big hunks of ice, according to feminist and post-colonial­ academics, but have feelings.  This sentiment is considered to be more valid than eeevil masculinist and White science.  This sentiment is also embodied in the peer reviewed article “Glaciers, gender, and science: A feminist glaciology framework for global environmental change research“.  A gander at the abstract will give you a good taste of the insanity contained in the article:

Let’s delve a bit more into the realm of insanity… 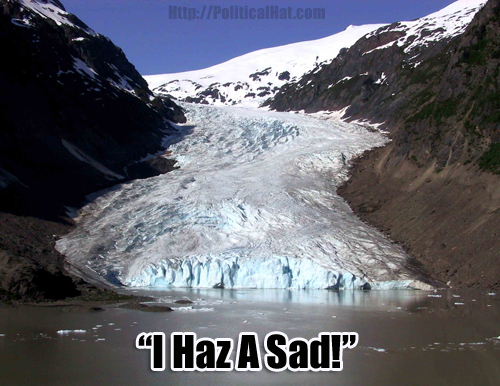 In the introduction they state a sane and ration statement made by a geophysicist:

“Ice asks no questions, presents no arguments, reads no newspapers, listens to no debates. It is not burdened by ideology and carries no political baggage as it crosses the threshold from solid to liquid. It just melts”.

Of course, being post-colonial feminists, they only state this bit of sanity in order to dash away as far as they can therefrom, and go on to say:

“But the ‘ice is just ice’ conceptualization contrasts sharply with conclusions by researchers such as Cruikshank, who asks if glaciers listen”

Yes, according to the new academic liberating ideology of feminist and post-colonial frameworks, a hunk of ice LITERALLY listens to people…  But wait!  It get’s even more insane, because:

“A critical but overlooked aspect of the human dimensions of glaciers and global change research is the relationship between gender and glaciers.”

Oh, Heaven forbid that anyone mis-genders a freakin’ hunk of frozen water!

But this isn’t just about gender and feminism, but about intersectionallity:

“While there has been relatively little research on gender and global environmental change in, there is even less from a feminist perspective that focuses on gender (understood here not as a male/female binary, but as a range of personal and social possibilities) and also on power, justice, inequality, and knowledge production in the context of ice, glacier change, and glaciology”.

In effect, “science” is just an insidious plot by White men to oppress other people by denying that glaciers have feeling and theremore mis-gendering those poor, suffering hunks of frozen water.  “Science” then, is considered “Eurocentric” and “masculinist”, and thus axiomatically wrong and oppressive.  Thus is becomes important to listen to folk understanding and the voice of native women (who are obviously a Rousseau-esqe “noble savage”) in order to liberate people from the eeevils of logic, experimentation, and scientific analysis.

The authors then go on to whine about how this evil magic perpetuated by White men (i.e. Science) doesn’t take into account cultural opinions, folk religion, and other “knowledge” outside of actual glaciology.  This is because, as we are repeatedly told, science is “gendered” and denies the magical incites of womyn everywhere (except, of course, for women who are actual scientists).  The evil of the White man’s “science” is somehow based on colonialism, imperialism and patriarchy, and not the scientific method, experimentation, and objectivity.

The “proof” of this “masculinist” domination is that historically it is men who have been explorers, mountaineers, and scientists.  Thus, to feminist and post-colonial academics, it must be wrong, evil and oppressive.  Q.E.D., so as to speak.  For the Progressive left, there is no difference between men and women, with biological sex itself just being a “social construct“, unless it involves attacking men, in which case there’s totes huge differences!.  Indeed, most of the article involves whining about men, especially White men.

Objective research, such as using satellites for accurate and factual measurements is dismissed a a “god trick”, while “folk glaciologies” are considered sacrosanct and the embodiment of hidden and marginalized truths.  The alternative then is:

“Crucially for feminist glaciology, feminist political ecology argues for the integration of alternative ways of knowing, beyond diverse women’s knowledges to include –more broadly – the unsettling of Eurocentric knowledges, the questioning of dominant assumptions, and the diversification of modes and methods of knowledge production through the incorporation of everyday lived experiences, storytelling, narrative, and visual methods”

And just what does this new alternative way of uncovering hidden truths and alternate knowledge reveal to us?  That glaciers have feelings!

Why bother with that oppressive science when we can just worship hunks of frozen water and learn the wisdom of H2O!

And, of course, scientists dismiss this because it’s nonsense, but because it threatens their evil ways of domination!!1!

“Such knowledge diversification, however, can meet resistance, as folk glaciologies challenge existing power dynamics and cultures of control within glaciology.”

Why would scientists have a problem with “knowledge” that portrays “the glacier’s sensual, embodied nature as the main character goes through”?

Remind me again how it is those “wacky Reich-wingers” who are anti-science, while crystal worshipping anti-vaxxer post-colonial feminists are the ones who “love science sexually”?

This “study”, by the way, cost the taxpayers $412,930 via the National Science foundation.

N.B. Citations removed from quotes for ease of read.

One Response to Feminist Glaciology, Or Stop Mis-Gendering Glaciers