Academic research in the social sciences is not about finding the truth.  It is about having a narrow-minding worldview and validating it through cerebral onanism.  A so-called “ecofeminist writer, scholar, activist, and documentary filmmaker,” Greta Gaard,  expostulates about “Feminist Postcolonial Mail Studies.” 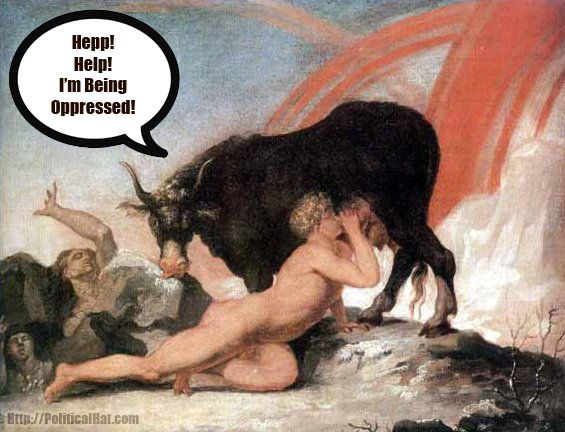 Apparently milk is the tool of the Kyriarchy to oppress non-Whites, women, and animals…

“What critical framework is sufficiently inclusive to describe these uses of milk across nations, genders, races, species, and environments? Because milk is produced by female mammals, a feminist perspective seems to offer a logical foundation for such inquiry. From the start, feminism has been a movement for justice: at its heart is the centrality of praxis, the necessary linkage of intellectual, political, and activist work. Feminist methodology puts the lives of the oppressed at the center of the research question and undertakes studies, gathers data, and interrogates material contexts with the primary aim of improving the lives and the material conditions of the oppressed. Using standard feminist methodology, twentieth-century vegan feminists and animal ecofeminists challenged animal suffering in its many manifestations (in scientific research, and specifically in the feminized beauty and cleaning products industries; in dairy, egg, and animal food production; in “pet” keeping and breeding, zoos, rodeos, hunting, fur, and clothing) by developing a feminist theoretical perspective on the intersections of species, gender, race, class, sexuality, and nature. Motivated by an intellectual and experiential understanding of the mutually reinforcing interconnections among diverse forms of oppression, vegan feminists and ecofeminists positioned their own liberation and well-being as variously raced, classed, gendered, and sexual humans to be fundamentally interconnected to the well-being of other nondominant human and animal species, augmenting Patricia Hill Collins’s definition of intersectionality to include species as well.”

The drivel Greta Gaard spouts makes it very clear that “feminist methodology” is about “the centrality of praxis, the necessary linkage of intellectual, political, and activist work.”  In other words, academics is noting but a tool to push one’s political ideology on others. Further, rather than appoach anything with an open mind, the “research” begins with the presumption of oppression, and any and all research is directly aimed at validating that presumption, and overthrowing this oppression.  That these grand conspiracy theories may not exist is ignored, for they are articles of faith.

The full “academic” paper can be seen below:

Toward a Feminist Postcolonial Milk Studies

One Response to WTF?: “Toward a Feminist Postcolonial Milk Studies”