It is a trope of the Left that they define racism, sexism, transphobia, &c. in terms of not only hatred, but also of “power.”  Since straight individuals are defined as “having power” because the entirety of society was “constructed” by straights to gain power and unearned privilege by oppressing anyone who isn’t “cis-normative”.  This is not a reasoned argument, but a statement of faith, whereof the straight, “cis,” male, &c. are designated as immoral and evil, and anything in opposition being considered morally good simply for being in opposition.

For simply disagreeing, the mob will bully you.  You will be forced grovel and beg for forgiveness.  Even if you support their “right” to do as they will, you will be punished for it. Even if you agree with them, you will be punished for supporting the right of others to disagree.  You have no private existence, and your very conscience is the allegedly proper domain of Social Justice Warriors and champions of a totalitarian monoculture.

New, one who claims to be the opposite gender is protected from all criticism even if the criticism has nothing to do with what gender they think they are.  Case in point:

“Representatives of… [Bruce] Jenner reportedly negotiated her ESPYs award in exchange for PR plugs in her upcoming TV series and threatened to pull out of her 20/20 interview.

“Reports have emerged that Jenner’s team approached ESPN with the idea that she win the Arthur Ashe Courage Award just as details were being finalized for her 20/20 interview with Diane Sawyer on ABC.

ABC and ESPN are both owned by Disney, and ABC aired Wednesday’s awards ceremony.” 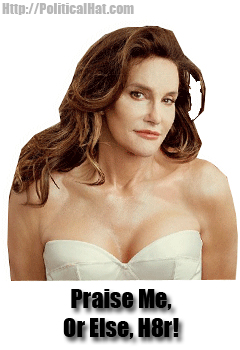 He will never be vilified.  That it took a foreign press to just mention this is telling.  The ESPYs are a joke.  Bruce Jenner is a joke.  “Trans Pride” is a (deadly) joke.

But “trans” people are beyond criticism.  They have the power and the privilege of making other people praise them.  By the academic Left’s own definition, “transphobia” can not happen; “cisphobia,” on the other hand, is being practiced right now.

One Response to Trans Privilege