First Amendment in The Closet

The Colorado baker, who refused to bake a cake celebrating a Gay Wedding (before Gay Marriage was imposed to satisfy Anthony Kennedy’s delusions of future adoration), appealed to a real court.  Sadly, that court decided to implement their per-conceived and anti-freedom totalitarian outcome. 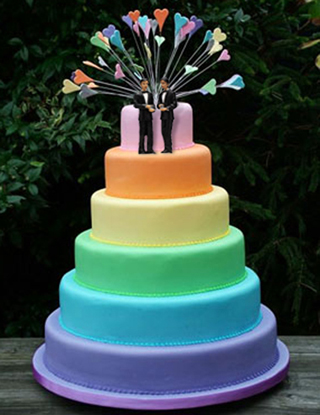 To this effect, they made a mockery of real civil liberties:

“No matter, said the court of appeals. It decided — for the first time ever — to apply the ‘relation back’ doctrine to essentially reset the parties and then simply deemed the rather significant matter of filing a claim under the wrong statute a mere ‘typo.’

“Nothing was going to stop the court from proceeding directly on to the culture war.”

The entire concept that laws that might end up restricting the 1st Amendment at least be content neutral:

“Next, the court dismissed Phillips’s defense — that he wasn’t engaging in sexual-orientation discrimination because he was happy to serve gay customers, just not to help celebrate gay weddings – by arguing that, in this case, ‘conduct cannot be divorced from status,’ especially when ‘conduct is so closely correlated with the status that it is engaged in exclusively or predominantly by persons who have that particular status.’ Does this mean that a refusal to bake a Confederate-flag cake would be deemed discrimination against white people? Somehow, I suspect not.

“Follow the ‘logic.’ The refusal of a religious customer’s request for a religious message is not discrimination on the basis of religion in part because the baker has helped convey other religious messages from other religious customers. Yet refusing a gay customer’s request for a message celebrating gay marriage is sexual-orientation discrimination even though the baker has helped other gay customers convey other messages. Got it. The logic is clear: Gays win and Christians lose.

“The court then rejects Phillips’s First Amendment compelled-speech argument because ‘designing and selling a wedding cake . . . does not convey a celebratory message about same-sex weddings likely to be understood by those who view it.’ In addition, the court held that wedding guests would attribute the message of the cake to the customer, not to Masterpiece. In other words, a cake celebrating a wedding won’t be understood as celebratory. Right. Nor — despite the fact that every sentient person knows the cake is the baker’s work and not the couple’s — will anyone impute the couples’ views to the bakers.

“But if that’s the case — if the clear message of a cake isn’t imputed to the baker but instead the customer — then why is it okay to refuse ‘offensive’ religious messages from religious customers?”

This is why conflating sexual affinity with race is nonsensical.  Race does not prescribe propensity towards an action; Homosexuality is based on explicitly that.  There is a clear distinction between discriminating against someone because of their sexual desires, and refusing to utilize one’s personal creative abilities to promote and endorse a chosen action and moral belief that one does not morally condone.

“The court concludes its First Amendment analysis by attempting to assure the bakery and the public that it is not in fact preventing anyone from expressing opposition to same-sex marriage. Of course the bakery can’t post anything ‘indicating that those engaging in same-sex marriage are unwelcome at the bakery,’ but it can — get this — post a notice that Colorado law prohibits it from discriminating on the basis of sexual orientation. Translation: We’ll protect your First Amendment rights by assuring you that you can post state-approved messages.”

In other words, the explicit prohibition on the state against infringing one’s free exercise of religion and of speech, is null and void when the government “balances” it away in the face of the “social justice” of mandatory affirmation.  But in the concept of “content neutrality” cuts both ways…

“If nothing else, it’s comforting to know that Colorado can force an orthodox Islamic butcher to make sausages for a polyamorous bisexual bachelor/bachelorette party, so long as no one asks the butcher to outwardly promote swine and free love.”

Stop laughing.  We all know that only Christians will be forced to limit their faith to exercise in the closet.

Ultimately, the 1st Amendment is being discarded like so Anthony Kennedy’s used tissue:

The complete desecration of the 1st Amendment can be read below:

There is a fund to help fight against this attack on the First Amendment.