If You Aren’t Sufficiently WITH The Mob, You are Their Enemy 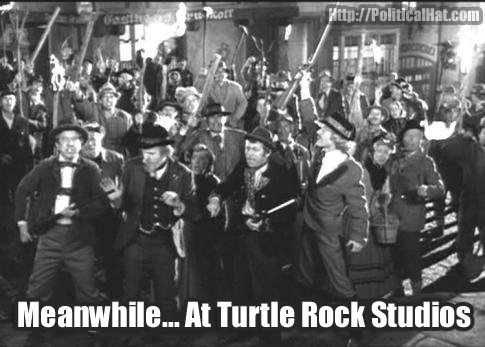 The figurative drawing and quartering of Donald Sterling gave fair warning about the danger of an outraged mob.  That danger has now been realized: A man was fired for simply stating that Sterling had a right to say what he wanted in private:

The comments made by our former community manager stand in stark contrast to our values as a game development studio. <1/2>

What was his sin?  Simply this:

Here's an unpopular opinion: Donald Sterling has the right as an American to be an old bigot in the security of his own home. He's a victim.

While this isn’t a question of the 1st Amendment, per se, it does involve the broader concept of being able to think and say what you want without having a mob of zealots chase after you with pitchforks.

Orin’s crime wasn’t even racism or bigotry, it was the defense of the right to be wrong and the right to privacy!

His crime was daring to pint out hat he wasn’t one of the rabid jackanapes of the frothing “get Sterling” mob.

This is nothing but Marcuse’s “Repressive Tolerance” essay put into practice.  Daniel Hannan MEP astutely notes how this differs from that broader concept of free speech:

"That's an unacceptable view," (as opposed to "I disagree with that view") situates the speaker pretty reliably on the Left-Right spectrum.

The irony that this condemnation comes from the “huzzah for diversity” and “I heart tolerance” crowd is so expected, that it has ceased to be ironic.  “Diversity” just doesn’t mean what it used to:

The word 'diversity' has come to take on the opposite of its literal meaning. It now means 'bringing your thinking into line with ours'.

The veritable Ace, of the Ace of Spades HQ, comments on your humble author’s statements:

“This guy didn’t even say ‘I can see why Sterling didn’t want his mistress hanging out with black guys.’

“He was only saying that the “old bigot” had the right to be an “old bigot” in the privacy of his own home — which is true.

“And so — not for agreeing with sterling, he didn’t, but for merely questioning the PENALTY imposed on sterling, he gets fired.

“Now it’s not even a matter of questioning if something is racist. You can agree it’s racist, and wrong, but just argue that the penalty is disproportionate — and that is now a Racial Firing Offense, too. “

It just goes to prove, that in this brave new world, when affirmation is mandatory,  silence becomes oppression, and merely questioning is a sin.

The same people who demanded that you stay out of the privacy of their bedroom now happily invade the privacy of other and punish you for exercising their freedom in a way they don’t like.

One Response to If You Aren’t Sufficiently WITH The Mob, You are Their Enemy