When Everything is a Public Issue, Then You Have No Private Existence

One of the fundamental differences in political philosophy is the extent and scope of government.  It is not so much the size of the budget or the number of civil servants, though there is an obvious correlation, but the scope of what the government can do and what private citizens may do.  One of the oldest definitions of liberty was the freedom to do anything that was not prohibited, and what was prohibited was limited to what was necessary; contrarily, some view freedom as being a gift from the state, be it a god-king or a popular assembly, and everything is within the states purview with citizens being allowed to decide for themselves what the state gives them leeway to choose. 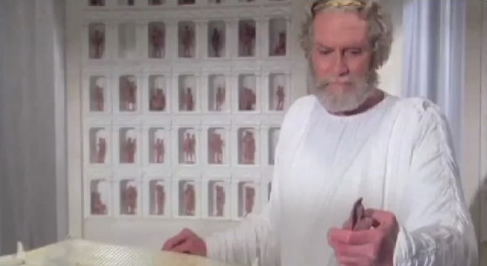 Pictured: The government respecting the private affairs of others.

Mike Konczal, at the Washington Post, speaks about the need for the state to have wide ranging powers because economic effects are a public issue:

“‘[E]conomics has become a matter of public policy, not individual action…Let us bear in mind that unemployment is a public problem’… because ‘the individual firm, the individual himself, is powerless to cope with the complexities in times of stress.'”

That the state is run by individuals, who are prone to the same limits as any other individuals.  However, the left considers the state to be but the avatar for the volonté générale (i.e. the General Will), which is to say the will of the public, but somehow if from the people but not of them.  For them, people submit to the volonté générale and are guided by it; in other words, everything is a public issue, as Konczal seems to believe:

“One can spend an entire lifetime debating the distinction between ‘public’ and ‘private,’ but for this post let’s use an approach from John Dewey. In ‘The Public and Its Problems’ (1927), Dewey argued that the public is involved wherever an action between two people has consequences ‘that extend beyond the two directly concerned.’ Given ‘that they affect the welfare of many others, the act acquires a public capacity.’ And as such needs a public response. And conservatives reject this.”

The underlying problem with this view is that it assumes that “public” = “government.”  With the attitude that a democratically elected leader is just the expression of the will of the people, and thus can do no wrong since said leader is just exercising the will of the people, the state takes on totalitarian dimensions under this expansive view of the state’s “public capacity.”

James Taranto of the Wall Street Journal sums up the problem with this view:

“This paragraph is either artfully or sloppily ambiguous. What exactly is ‘this’ that ‘conservatives reject’? Dewey’s expansive definition of ‘public capacity’? Or the conclusion that any act with a ‘public capacity’ requires ‘a public response’–which Konczal takes to mean a governmental one?”

No man is an island, as the saying goes, so practically anything one does or does not do would be within the purview of the “public.”  As far as this goes the private actions may very well have an impact on others.  This becomes problematic when “public” becomes concomitant with “governmental.”   It is the expansive view of “public capacity” that the Progressives truly believe in, which puts the state, under enlightened control of the elite of course, in control of society, and thus the people who live within it.

One of the great lies of the Progressives is their claim to demand a “right to privacy,” which is invoked to defend access to abortion, contraceptives, and other people’s private businesses.  Yet this “right to privacy” is being invoked to require third parties to subsidize and be forced to affirm social positions that the Progressives deem correct.  The “right to privacy” has nothing to do with real privacy, but rather with declaring certain acts to be “protected” and thus mandatorily supported by the state, even at the cost of compelling other people involve themselves in the so-called “private” actions of others.  This expansive view of “public capacity” is the natural consequence of conflating the “public” with the “government.”

Under the Progressives’ view, the state is just machina with which the deus manifests itself.  As such, the state is the motive will behind society.  Society, then, is a creation of the state and can not exist without it.  As such, everything that is “public” must be a matter of government action or correction.  This ties in with their view of government as being managerial if form and function.  Controlling people becomes the integral purpose of government.

For the Progressives, since everyone has submitted their own will to the volonté générale, everything not only innately is within the public purview, but that everything must be under the direction of the “public” (i.e. the government).  If people act as private parties, then decisions that affect society are in private hands.  This would thwart the “will of the people” and thus be “undemocratic” since actions may be at variance from the pre-determined results divined from the will of the people.  The Progressives try to hide that this is their view be supporting the “right to privacy” for actions and beliefs that are consistent with the world that they which to mould.

This is why when the private interactions of private individual, or even just the private opinion of an individual, conflicts with the Progressives utopian dreams, the “right to privacy” ceases to exist.  You may not dissent, as you will be made to care.

In reality, the government is but a part of society, a necessary evil with limited power and limited scope.  Society is not a creation of the state or the faux dieu the volonté générale.  While things may be of “public” concern, they usually are not a “governmental” concern.  Society will evolve and adapt due to the free interaction of free individuals.  This is the organic view of society and the state.  It is also the evolutionary view of society, in contrast to the Progressives’ almost creationist view of society.

Ultimately, the government and our elected representatives are but stewards, and their power and scope is limited.  Society will evolve and adapt, but still connect not only the choices and decisions of the present-day citizenry, both in their private actions and in the choice of their representatives, as well as those who came before, and those who will come after.  Change that is imposed by the government should only be used as a last resort in order to overcome great evil, that like a cancer, has invaded our civic heritage, and then only to the extent necissary to take care of that immediate problem, limited temporally in scope.  Anything else would be a true violation of the people’s will.