When Affirmation is Mandatory, And Silence is Oppression

Once upon a time, we were told that we shouldn’t violate the privacy of other people’s bedrooms, and as such the state should not criminalize what goes on in said private bedroom, including the question of homosexual activity.  Such sexual activity between consenting adults of the same sex has over the past half century gone from being criminal and a sign of mental illness, to being “more equal” than others.

After legalization, the clamor was for tolerance.  The claim was that being able to do what you want in the privacy of your home was not enough, and that people ought to tolerate those who are homosexual (or other such atypical sexuality).  Both privacy and tolerance readily appeals to the American sense of respect and fairness.  Certainly people could try to convince society that aside from the actual sexual activity, there was not difference between homosexuals and heterosexuals.  If things had just stood there, and society allowed to adapt and evolve, then perhaps the vast majority of Americans today would happily let homosexuals be and not interfere with the “privacy of the bedroom” and otherwise live and let live.  Unfortunately, “tolerance” turned out to be but “Act I” of a wholesale reconstruction of society towards quite intolerant ends. 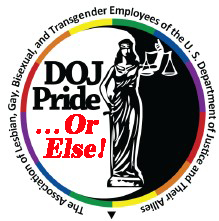 The Dept. of Justice is now being pushed towards mandatory affirmation of not just homosexuality, but of all such proclivities of the entire LGBTQWTF&c.&c. movement.  A brochure, sent to all managers in the Dept. of Justice, suggested, among other things:

DON’T judge or remain silent. Silence will be interpreted as disapproval.

DO respond with interest and curiosity. Asking respectful questions will set a positive, supportive tone.

In other words, the manager must not only tolerate, but must be forced to proactively affirm, approve, and celebrate homosexuality.

But what about those managers who do not personally believe that homosexuality, either the sexual congress itself or the associated political stances, is good, but are nonetheless willing to tolerate homosexuality and treat people as human beings and individuals, with their sexuality being but a small and irrelevant facet of these individuals?

Why, they will be discriminated against as “H8ers” and “homophobes,” with punishments and perhaps even lawsuits to follow.  It becomes clear that the Progressive forces that push the pamphlet don’t care about tolerance.  They themselves are a paragon of intolerance.  As the veritable Ace of the Ace of Spades mentioned about the New York school that mandated that girls ask each other for a lesbian kiss:

“There is a very real suspicion, held for good reason, that anything that is not illegal in a socialist state will be mandatory. That is, there are only two categories of actions: the illegal and criminal, and the mandatory and coerced. Only What the State Forbids and What the State Compels.”

Your humble author does not care what people do in the privacy of their bedroom or even if people openly say their sexual proclivities are.  But heterosexuality is normal for the vast majority of the human species.  “Heteronormative” values are normative because they are naturally normal.  It is, above all else, the absolute hypocrisy of those who, under the banner of “tolerance,” are so very intolerant of others.

The complete pamphlet can be seen below:

2 Responses to When Affirmation is Mandatory, And Silence is Oppression