They Would Rather the Poor be Poorer

Alabama is having a new scholarship tax credit program challenged by the Southern Poverty Law Center (SPLC) because it doesn’t help every single child.  It would provide $3500 per student in a failing public school.  Not every child will benefit by this, but many will.  That that is the very reason why Progressive organizations such as the SPLC oppose it: If you can’t help all kids, then you shouldn’t be able to help any kids.  It strikes at the root of what the Progressive left considers “justice.” 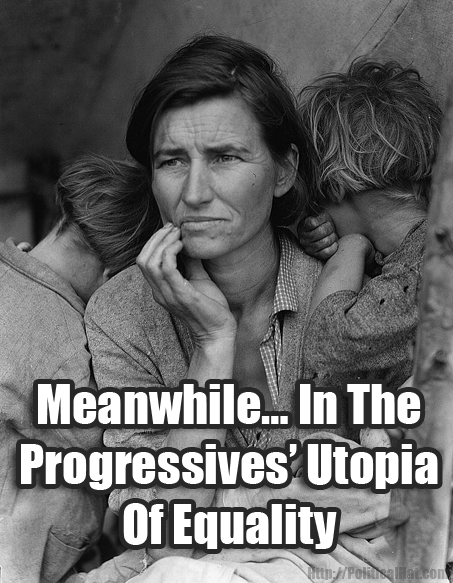 Justice, to the Progressives, is forced egalitarianism in order to artificially create a society where there is an equality of outcome.  If everyone is in the same boat economically, then no one can impose injustice on anyone else.  This ignores the fact that someone will have the power to over people to make that happen.  Progressives are monomanically driven towards “equality,” that they would, in the words of Margaret Thatcher, “rather the poor were poorer, provided the rich were less rich.”

They want to destroy and make everyone equally poor (aside from those who are more equal than others), and that that situation would somehow spontaneous create a utopia were everyone is free of teh eeevils of “hierarchy” and would live in communal bliss.

So convinced of this they are, that they are willing to destroy everything to achieve superficial “equality.”  Of course, even then, some are always more equal than others.

This entry was posted in Education, Progressives and tagged New Feudalism, Social Justice. Bookmark the permalink.