The owner of the L. A. Clippers, Donald Sterling, has been fined $2.5 Million dollars and banned for life from the MBA, and may even have his team forcible taken from him.  Allow your humble author to be blunt:  I do not know what Sterling specifically said, and it does not matter what he said in regards to the points being made herein.  This is not meant to defend the indefensible, but to condemn the mob. 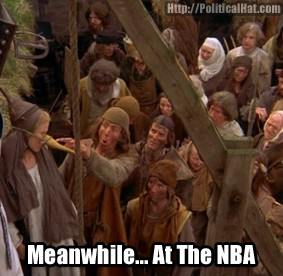 Donald Sterling turned me into a newt!

It is true that Sterling seems to have had a history of troubling run-ins for housing discrimination, but it is equally true that the NAACP gave him a lifetime achievement award and was set to give him another.  Clearly, he is being punished for what he said in private.

That this was illegally obtained by illegal wiretap makes it worse, since recording someone without their permission is illegal in California.  Despite the fact that the only crime committed was by the girlfriend, it is Sterling who is the only one so far being punished.

This comes soon after the Mozilla scandal where CEO Brenden Eich was effectively pushed out for daring, nearly a decade ago, to have the same position on Traditional Marriage that Barack Obama had!  Even though Eich never showed any animus at the work place and demonstrated not only tolerance, but support for LGBTQ individuals; he was still turned into a pariah.   Sterling was accused of actual housing discrimination, while Eich only supported keeping the traditional definition of marriage, though Same-Sex marriage advocated consider that discriminatory enough.

The purging from “polite society” of those who dare to express “incorrect” ideas is not just a non-governmental problem, as simply being affiliated with the Boy Scouts is enough to get you purged from elected office.

Sterling’s case, however, is far more egregious.  His utterances were done in private.  It was only that it was illegally recorded that it got out.  Wasn’t the freedom to act and speak as a private citizen without being subject to a witchhunt something we held valuable in America?  The concurring opinion in the New Mexico Same-Sex Wedding Photography case even stated that the outside of their business, the photographers were free to say and do as they wished. Clearly, such notions were but sweet lies intended to lull those who cherish freedom of speech into a false sense of security.  Now-a-days “incorrect” thinking is declared to have a public impact, and as noted before, “When everything is a public issue, then you have no private existence.”  It does not matter if you are wrong or right, bigoted or tolerant, you will comport to the proscribed thinking.  Anything that reveals the possibility of incorrect thinking becomes a green light to persecute, bully, and otherwise vilify the dissenters.

This isn’t about tolerance or fighting actual acts of discrimination.  It has been about denying any tolerance and about discriminating against those who dare to disagree.  No longer are we told to support pluralism where people could disagree and believe different things.  The culture, through “the long march through the institutions,” has shifted away from what it was and towards a more Progressive Leftist mindset.   While the growing abhorrence of sentiments like those expressed by Sterling is a good thing, the Progressive Left have tied such wicked things into the greater civic heritage and condemn all those that refuse to adhere to their ideology as “H8rs” and monsters.  Anyone who questions this is reminded that “only those who are H8rs have anything to fear”… and you aren’t a “H8r,” are you?

This becomes dangerous when one considers the rabid “social justice” crowd who consider White people (or men, or heterosexuals, &c.) to be innately evil.  “Whiteness,” for example, becomes a sin and a form of oppression.  Thus, White people can’t but help to be oppressors and racists.  Only by proactively fighting for “social justice” and treating their “Whiteness” like a disease or alcoholism to be treated, can they be tolerated.  This hypocrisy can be seen by another NBA team owner: Jay-Z.  Despite his openly wearing at NBA games of a racist medallion of the “Five Percenters” who believe that “[w]hiteness is weak and wicked and inferior” and that White people “are devils.”  Yet another example is Spike Lee, who is publicly opposed to mixed-race weddings.  Even strangling someone and publicly, spouting anti-gay slurs, and killing someone isn’t so horrible as to warrant what Sterling is receiving!  Just because Sterling was wrong does not mean that the vicious froth of the mob is just or ought to be accepted.

Tolerance means tolerating those who or what you disagree with.  We, as a society should tolerate ideas and beliefs that we don’t agree with, even if they are obnoxious and disgusting.  Some have gone so far as to state that simply uttering something in private creates a “hostile work environment” for which the alleged transgressor ought to be punished to kicked-out.   If it does not involve the work-place, or the workers/workers’ families directly, then it ought not be considered to be creating such a “hostile work environment.”    This is especially so for private conversations.  Simply being who you are or expressing your honest beliefs should not be something we harass people over.  MEP Daniel Hannan put it well:

"That's an unacceptable view," (as opposed to "I disagree with that view") situates the speaker pretty reliably on the Left-Right spectrum.

We should all be free to state our beliefs without fear of either the state, or private parties using the legal system, punishing us for what we say, regardless of what it is that we do or do not say.

Sadly, we are now is a cultural situation where dissent will be punished, and the only freedom you have to dissent is alone in your closet, just as long as you publicly toe the line.

This entry was posted in Uncategorized and tagged Mood Music, Social Justice. Bookmark the permalink.