Progressives, Thy Name is Intolerance

Is there any greater lie than that of the Progressive Left’s belief in tolerance?  Those who dare to disagree, or even refuse to affirm, the twisted mores of the Progressives, are readily being punished, even if they are children!  Now, however, this treatment of those who dare disagree is becoming formalized to the point where the government will treat dissenters like second class citizens. 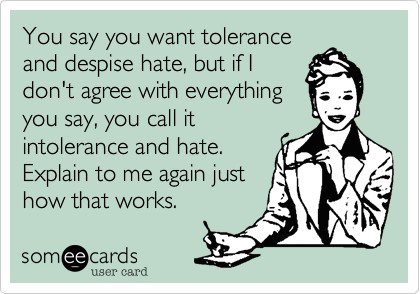 Ah, but isn’t that just opposing their discrimination?  Wouldn’t that just help create society in which everyone is tolerance, even if by force?  The clear answer is NO.  The “tolerance” that the Progressive Left believes in is the “tolerance” of those beliefs that they demand you believe.  They are intolerant of other points of view.  You are “tolerant” if, and only if, you blindly agree with them.  They are not just being intolerant of “intolerance,” but being intolerance of those who do not agree with them.  People who do not agree with same-sex marriage or transvestitism can be tolerance, yet they are not tolerated by the Progressive Left!  It is they who are a demonstrable paragon of intolerance.  This is because Progressivism is inherently false and oppressive.

Businesses, private non-profits, and even Individuals will be made to care.  California is proposing to deny non-profit tax status to those groups who dare to exercise their 1st Amendment freedom of association in a way that is contrary to the Progressive ideology.

The supporters of this move simply claim that non-discrimination is the law and the non-profits, such as the Boy Scouts, must follow the law.  The supporters further go on that they are not forcing the Boy Scouts to accede to their demand, but only punished for failing to exercise their 1st Amendment rights in a way that the enlightened elite do not tolerate.  This is hogwash.  Restrictions on non-profit tax status should be on content and association neutral grounds and only apply to those aspects that are bona fide elements of whether they are acting for profit or not.  It would be as if tax-exempt status was being denied to the NAACP for not allowing card-carrying Klan members to join and fully participate.

Of course not! The Progressive left does not care about tolerating other points of view, but only about forcing their view on others. They are even kind enough to want to “rehabilitate” those sad individuals who dare to think contrary to the new enlightened way of thinking.

In Oregon, a couple is being persecuted for refusing to violate their religious faith by making a cake for a lesbian couple.  Ah, but the state is magnanimous: “The goal is never to shut down a business. The goal is to rehabilitate,” [state labor commissioner Brad] Avakian said. “For those who do violate the law, we want them to learn from that experience and have a good, successful business in Oregon.”

But what about about religious liberty?  The Progressives respond that if you choose to engage in a business, you surrender that right.  They don’t see it as a violation because you are not compelled to engage in business.  In New Mexico, a wedding photographer was told by the New Mexico Supreme Court that she could not deny her services to a same-sex wedding, even though same-sex marriage is not legal in New Mexico!  In the concurring opinion, Justice Richard Bosson declared:

“The Huguenins are free to think, to say, to believe, as they wish; they may pray to the God of their choice and follow those commandments in their personal lives wherever they lead. The Constitution protects the Huguenins in that respect and much more. But there is a price, one that we all have to pay somewhere in our civic life.

No.  The surrender of your fundamental Constitutional rights is not the price of citizenship.  The protection of those rights from the government is a prerogative of not just citizenship, but of being a human being with inalienable rights.

Incorrect thinking must be corrected, and “tolerance” is a one-way street:

“In the name of tolerance, Mrs. Huguenin can be compelled by state power on pain of punishment to provide her services to Ms. Willock against Mrs. Huguenin’s several thousand year old orthodox religious beliefs, but Ms. Willock is under no obligation to simply tolerate those who disagree with her and find someone who is happy to provide the service.”

But what about the Constitutional right to free speech.  This isn’t a case of refusing to provide a service because they couple were of the same sex, but of refusing to engage in artistic and expressive actions that are contrary to their beliefs.  Even though it may be an act of commerce, photography is still expressive art.  “There is simply no way not to see photography as an art. The New Mexico court disagreed.”  Is there are way to have both anti-discrimination laws and protect our 1st Amendment rights?  There is:

“Mundane professions have no constitutional exemption from an antidiscrimination law, but a profession that involves a viewpoint — literally, in the case of photography — gets First Amendment protection. That’s not a ruling that’d satisfy everyone, but it’d at least vindicate the principle that you can’t be compelled to adopt another’s perspective, even if you’re being compensated for it.”

But the Progressive left would never accept this because they are all about compulsion.  We now live in a “free” country where “citizenship now has a ‘price’ and citizens must now ‘channel their [constitutionally protected] conduct’ lest they fall afoul of the Majesty of the Law in one of its flights of favoritism. There’s a word for this. It’s not “freedom,” and it isn’t pretty.”

But what about those who want to enforce their Progressive morality?  No one is forcing the Boy Scouts to seek tax-exempt status as a charitable organization, but neither is anyone forcing homosexual individuals to join the Boy Scouts!  No one is forcing florists, cake makers, or photographers to engage in business, but neither is anyone forcing people to go to those businesses!  Businesses have a right to refuse service, because the free market is about the free interaction of free individuals.  Even so, it is still generally accepted that businesses can be required to not deny services because of what a person is.

But the above examples aren’t examples of where service was denied because who they were, but on the basis of their voluntary expressive actions.  The case of a Washington florist who refused to provide services for a same-sex wedding is a perfect example.  The florist happily served the gay couple before, but only objected to affirming the moral message that she was adamantly against!

The Progressive left insist that if “a business provides a product or service to opposite-sex couples for their weddings, then it must provide same-sex couples the same product or service.” But there is a difference between a marriage ceremonies and serving a person the same exact meal you would to everyone else at a lunch counter is not comparable. A sandwich is a sandwich, and exactly the same; wedding ceremonies are expressive acts that innately vary.  If serving a sandwich is morally acceptable to one person, then it ought to be morally acceptable to sell it to another person, generally speaking; but celebrating and affirming one wedding is not morally equivalent to celebrating and affirming another, even between traditional marriages between husband and wife!  You can not refuse to sell a sandwich to a person because of their race, but someone can not demand that you make a sandwich you don’t want to make.  A Halal or Kosher deli can not be forced to cater a dinner with ham, and a religious person should not be forced to violate their faith because of someone else’s choice.

It goes far beyond the actions of businesses, but of how the government treats its own citizens.

The City of San Antonio wants to ban anyone who shows “bias” from serving or contracting with the city.  While purportedly this would mean that any one who serves or contracts with the city from giving unequal treatment to people based on sexual orientation and such, this proposed ban would itself discriminate against those who oppose same-sex marriage or who dare declare that a man in a dress is still a man.

In the new “tolerant” military, those who dare not affirm the proffered “enlightened” opinion is are punished for daring to oppose the new order.  It is almost like the Obama administration only trusts those who blindly parrot Progressive views with guns…

These have the same problem as with the Boy Scouts.  People are required to suspend their Constitutional rights in order to engage in business or even interact with the government on an equal footing as everyone else.  That the rule applies to everyone is irrelevant, since some people will required to violate their consciousness while other are not.  Government, unlike private people (or their businesses) must provide access, benefits, and services regardless of what the people think or advocate, for the government must be neutral in order to provide equal protection under the law and equal treatment by the law.  If the factor is not relevant to the direct access, benefit, or services provided, then the factor must be irrelevant.

But that’s the law, the rabid leftist might say.  If they don’t want to be forced to do that, they can just quit!  So, according to the left, “tolerance” means forcing people to act and say what the Progressives want them to think!  Force the norm on the population and the belief amongst the masses will follow.  After all, they can still think what they want just as long as they keep it entirely to themselves and don’t act contrary to the will of the Progressives unless it is in the dark… in the closet.

It is the Progressive Left that needs a lesson about Intolerance:

This entry was posted in Progressives and tagged Kyriarchy, Social Justice, Taxes. Bookmark the permalink.