It has firmly been established that the Progressive Left have used laws against discriminating on the basis of sexual orientation/preference as an excuse to violate the 1st Amendment rights of others.

Now, they are going after pastors who dare say in church that men are not men, nor men women, and that boys shouldn’t be able to use girls restrooms and visa versa:

“The city of Houston has issued subpoenas demanding a group of pastors turn over any sermons dealing with homosexuality, gender identity or Annise Parker, the city’s first openly lesbian mayor. And those ministers who fail to comply could be held in contempt of court.”

An attorney fighting the subpoenas stated: 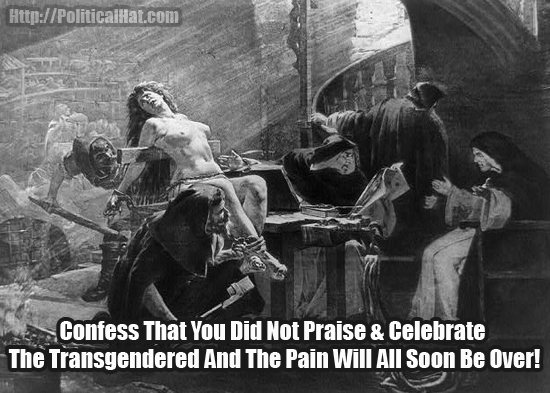 Yes, we indeed to have a modern day inquisition.  But it is not some Monty Python sketch, but a real life attempt to silence and intimidate those who refuse to profess the faith of “tolerance.”

Ironic, then, that the sermons are already publicly available.  It just makes it clear that the purpose of the subpoenas is nothing more than harassment.

Allegedly, this is due to a voter lawsuit filed against the city of Houston for rejecting voter petitions to repeal a law that would allow men into women’s restrooms and women into men’s restrooms.  The subpoenas were supposed to go after churches that might have talked about “equal rights, civil rights, homosexuality, or gender identity, … [and] restroom access.”  The subpoenas, though were filed against pastors who were not even part of the lawsuit!

Thankfully, this time at least, Houston is backtracking a bit and blamed the filing attorneys for the naughtiness.

This time, the backlash was strong enough to get them to step back.  Soon, though, this may no longer be the case.