Now that excuse is being used whenever someone refuses to contribute their personal creative abilities to support and further the political and social message of the LGBTQ movement: A T-shirt maker has been ordered by the so-called Kentucky Human Rights Commission to print T-shirts with a gay pride flag on it.  An “examiner” of the commission ruled that:

“The evidence of record shows that the respondent discriminated against GLSO because of its members’ actual or imputed sexual orientation by refusing to print and sell to them the official shirts for the 2012 Lexington Pride Festival.” 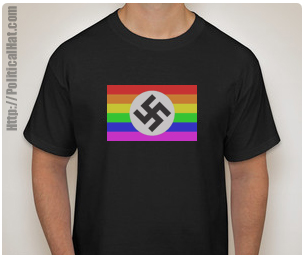 Of course, this is a blatant falsehood.  The manager of the company, which explicitly identifies as “Christian outfitters,” points out that falsehood:

“We’ll work with anybody. But if there’s a specific message that conflicts with my convictions, then I can’t promote that.”

His lawyer makes that point even more bluntly:

“Blaine declined the request to print the shirts not because of any characteristic of the people who asked for them, but because of the message that the shirts would communicate.”

Refusing to express a political message is not refusal to serve someone on the basis of who they are sexually attracted to.

The company has be mandated to print shirts advocating for homosexuality.

Mandated speech is NOT free speech.

As is becoming usual, they employees are also required to undergo “diversity training.”

One Response to Queering The Shirt