For refusing to express a belief that he disagrees with, Colorado baker Jack Phillips was condemned by the Colorado little kangaroo court, the “Civil Rights Commission.”  The sheer intolerance shown against bakers, florists, and photographers for daring to not utilize their artistic talents in the way that homosexual bullies wanted them to is abhorrent.

The “sentence” Mr. Phillips received, though, goes beyond the pale: He must send his entire staff to “sensitivity training” to be “trained” on what Leviathan declares they must think and what they must express; further Mr. Phillips must report on this quarterly.  In other words, one can “[t]hink of it as reverse conversion therapy (or straight man’s rehab) so that the state can mandate diversity through conformity.” 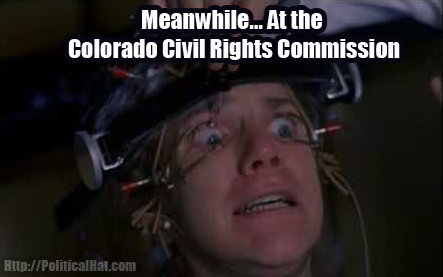 Of course, Mr. Phillips did not refuse service because the customers were homosexual.  He gladly offered to bake anything for them that did not conflict with his beliefs.  But then, some are more equal than others, and have the power and thus the privilege to force others to say and express what they want the others to say.  Mr. Phillips didn’t deny service to anyone because of who they are sexually attracted to, he simply didn’t want to offer his artistic services to an event that he did not support.

After all, the goal is not to force Mr. Phillips to go out of business, but to “rehabilitate” him into a proper minion of the social justice loving Progressive tyrants!

“Justice” without freedom or liberty is innately unjust.  Any “right,” such as the right to believe what you want or to not be forced to say what you don’t, that can be compromised according to the social justice whims of a state are not true rights, but simply license the state allows… so long as it’s convenient.

We are less than a step away from the Ludovico technique becoming real.  Which direction away from it, is for you to decide.