Posted on November 3, 2020 by The Political Hat

The 2016 election was an orgy of black swans, with not only the wild card of Donald Trump but also the worst Democratic nominee ever and an open Supreme Court seat that was poised to deliver the hard Left perpetual victories against the Constitution. At the time I readily admit that I thought that despite the Supreme Court vacancy, that the Clinton machine and compliant media would drag her over the finish line. Combined with your humble authors pretty accurate predictions in Nevada, I was too bearish on the Republicans chances, though not by much. Trump eked out an Electoral College victory by the skin of his teeth with a combined ca 78,000 votes across three states.

The consequence of so many people getting the election wrong was that those who said Trump would win became convinced that all they needed to do to win was a Trumpian personality and that they could alienate anyone not sufficiently pro-Trump. Your humble author, the day after the election, addressed this:

“I would suggest that the disagreement over the predicted outcome of the election in the political equivalent to the debate over continental drift. Continental drift was, in part, rejected because the proposed mechanism was laughingly false, namely that ‘“icebergs” of low density granite floating on a sea of denser basalt’. Thus I maintain that I was wrong for the right reasons, and that the Trump cheerleaders were right for the wrong reasons.

“How so? I openly posited that the Presidential election was a race to the bottom, with the winner being the one that enough swing voters disliked the least. In fact, a significant portion of Trump’s supporters openly loathed him to the tune of nearly one out of five. Indeed he needed every single one, as even a slight shift would have given the election to Clinton. My assessment was that though Clinton was clearly a corrupt, evil, senile, sick, and criminal paragon of pure concentrated evil, but that baring an unlikely self-destruction, the combination of media and news mandarins combined with her evil not being openly presented, would not be enough to counter the visceral reaction that Donald Trump, and his obnoxious true-believers, would effect.

“Therein lies my error, not in the dynamics of my assessment, but of the magnitudes.”

But then the U.S. was hit with the one-two punch of Corona-chan and the George Floyd incident.

The death George Floyd has unleashed not only continuous rioting in many cities by “Antifa” revolutionaries but an almost unopposed elevating of #BlackLivesMatter as a shibolith that can get someone fired for not parroting as well as “Critical Race Theory” and “equity” replacing equal rights as the open talking point of the Left. Even with many elected officials given tacit, if not open, support to these rioters, the pushback might not have as much of an impact as some may presume. Many college-age Whites used to the “social justice” rhetoric as supportive of the ideology even if they don’t care for the rioting, especially when it isn’t their own personal suburban areas that have been torched and looted.

The COVID-19 pandemic radically impacted the economy and also how people voted. Mail balloting was hastily introduced with plenty of problems that pointed to potential chaos for the general election, including many states such as Nevada shotgunning out full ballots to all active registered voters.   Though in some states this has made little impact and the signs and portents of this years election can divined by comparing to previous years, in others it has introduced far too much uncertainty.

For these reasons, there is too much uncertainty for a hard n’ fast Electoral College map. To encapsulate the uncertainty, predictions will use probability fitted to a Gaussian curve.

For the Presidential Election, A narrow Biden win seems the most likely scenario, though clearly a wider Biden victory or a narrow Trump lead are strongly possible. 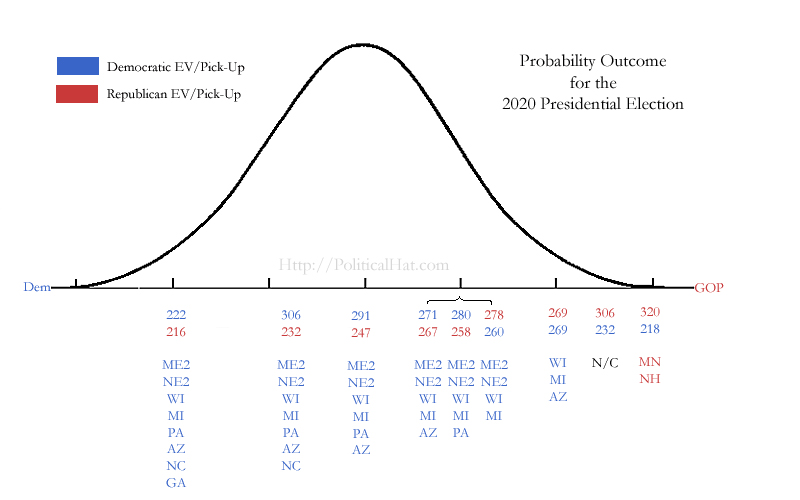 Nevada will be discussed below.

Of note, one of the quite plausible outcomes is a 269-269 Electoral College split. 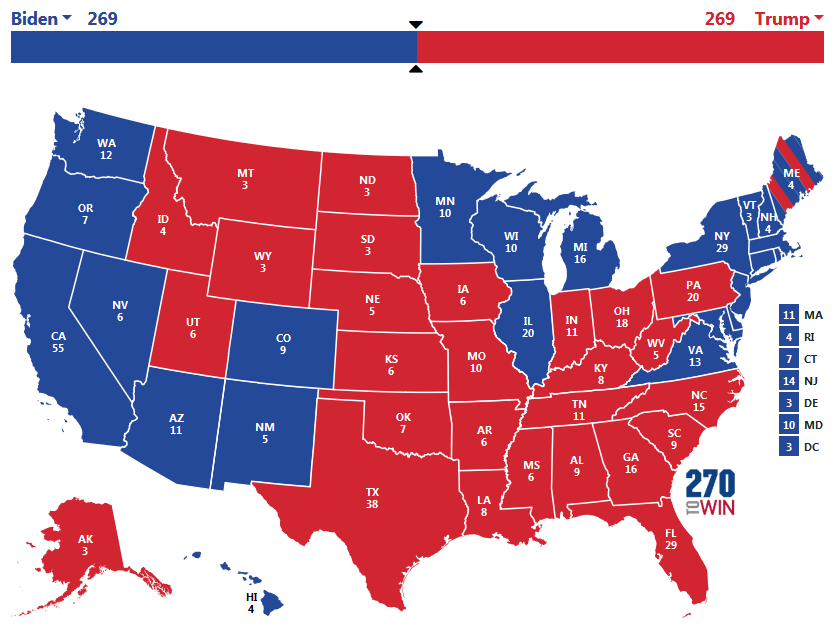 In such a case the incoming House of Representatives would decide by majority vote of the state delegations, per the 12th Amendment. At present, the Republicans hold 26 state delegations—the bare minimum—by a bare minimum of one Representative. In the House of Representatives, the Democrats will likely pick up less than a dozen seats nationwide which will likely be partially blunted by a dead-cat bounce for the California GOP. Since it would be the incoming House that would decide, it is plausible for neither the Democrats nor the Republicans to hold a majority of delegations, in which case the elected Vice-President will become acting President until the House of Representatives decides on someone, as per the 20th Amendment. The Vice-President, if lacking an Electoral College majority, will be chosen by the Senate. So, what will the Senate look like?

For the Senate, a 50-50 split is the most likely scenario. This means that if the 269-269 Electoral Vote happens as well, Mike Pence will cast the tie-breaking vote to declare himself acting President. 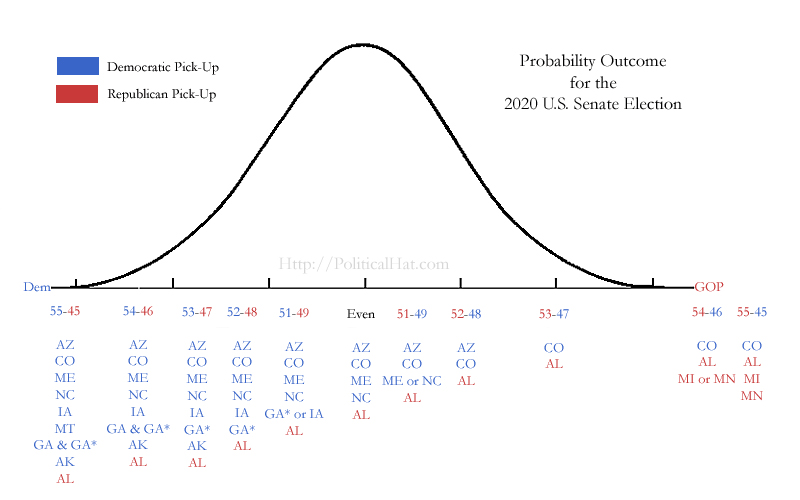 The Republicans will easily pick Alabama back up—lost in the 2017 special election only because the Republicans nominated the only Republican in the state as repulsive to an electorate as Hillary Clinton. Colorado is lost for Gardner for the Republicans, and McSally has shown to be a poor candidate and has been constantly behind in Arizona.

In North Carolina, Tillis will benefit from his opponents sexual picadillos, but it is likely too little too late.

In Maine, however, they have an “instant” run-off vote. While Collins has her own brand in Maine, and in normal years or without the run-off vote, she’d likely squeak by. But it is more likely that after eliminating the also-rans, she’ll fall behind.

Of the remaining vulnerable GOP seats. Iowa, Alaska, and Montana are vulnerable, but will likely survive anything short of a Biden landslide. If the Kansas seat ends up going Democratic for the first time since the Great Depression, the Republicans will be looking at a very long walk in the political wilderness.

In Nevada, it does not look good for the Republicans. They have only one of the four House seats, neither of the U.S. Senate seats, none of the partisan statewide officers aside from Secretary of State, are a super-minority (less than ⅓) of the Assembly and are only one seat away from super-minority status in the state Senate (and that seat they won by literally a couple dozen votes).

Comparing the 2020 election with prior elections is difficult, not only because of Nevada’s explosive growth rate (and increase of ca 400K active voter in four years from 1.4 Million to 1.8 Million—most of that independent registrations), but because the election is being held so differently.

The registration gap between Republicans and Democrats in 2020 is comparable to what it was in 2016 of about 88,000. However, the biggest growth has been among nonpartisan voters who have increased from just over 300,000 to over 400,000.

In previous years about ⅔ of the vote came from early voting, with in-person voters outnumbering requested absentees by about a 10:1 margin. In the past the in-person early voting almost always gave the Democrats a voter lead, while the requested absentee ballots cut into that, resulting in election day voters deciding the election. In 2020, full ballots were shotgunned out to all active voters. This has resulted in Democrats getting a massive absentee ballot lead that was lessened but not eliminated by Republicans dominating in-person voting.

In 2020, the Democrats built up an overall early voter lead over Republicans (as of Monday morning) of just under 47,000 voters or about 4.2% lead amongst votes cast. This includes over 89,000 in populous Clark County (location of Las Vegas and over ⅔ of the state’s population) and about 1700 in Washoe County (location of Reno and the bulk of the rest of the state’s population) despite Republicans having a registration lead in Washoe. In past elections, Clark County’s Democratic bend was countered by the rural counties voting overwhelmingly for Republicans, leaving Washoe the determiner. If Republicans don’t at least break even, they lose, and with Clark County increasing it’s share of the states population and its voters, even a narrow win in Washoe for Republicans may not be enough.

For Republicans to have any chance of winning, they will need a massive election day voter advantage and not unfavorable late-arriving mail ballots. While the margin for President in 2016 was almost 20,000 votes in Hillary Clinton’s favor compared to the ca 46,000 lead in early voters, far less of the vote was in, meaning to make up that amount and more, all else equal, the Republicans need an election day advantage they haven’t had in at least the past decade or more.

Of course, not all else is equal. Hillary Clinton is not as unlikable as a candidate as Joe Biden. But the biggest X-factor is the independent voters, who in 2016 favored Trump.   If they end up favoring Joe Biden in the election, it’s game over for Trump and the Republicans in Nevada.

Another difference between this year and previous years is that in this election the Clark County Registrar of voters isn’t listing voters who voted in a database that can be broken down by Congressional, state Senate, or Assembly district. As best different areas of the county can be compared by ZIP code. It is likely that the GOP will pick up 2 seats in the Assembly though may end up losing a seat to sink further into super-minority status or at best pick up a total of five seats which could bring them up to 18 of the 42 seats. The GOP will likely stay even in the state Senate, though they may gain or lose two seats. In either case, the Democrats will have a trifecta of Governor, state Senate, and Assembly meaning they will have free reign to redistrict the Republicans into permanent super-minority status.

In conclusion, the Democrats are likely looking at a slim win in the Senate and in the Presidency, but there is enough uncertainty to give Trump a very plausible route to reelection and the Mitch McConnell a route to remaining Majority Leader. In Nevada, the proverbial tar and feathers ought to be readied for the Republican leadership in the state.

tl;dr Likely Democratic narrow win nationally but Trump and McConnell can’t be counted out; the Nevada GOP is derping.

This entry was posted in Elections and tagged Democrats, GOP, NVLeg. Bookmark the permalink.