Systemic Oppression, Mandatory Allyship, and the March Through the Institutions 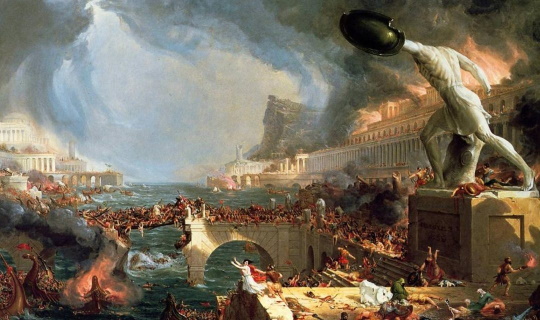 For many, the riots, revolutionaries, and cultural iconoclasts that seemed to come out of nowhere and have been met without any resistance are either a bit of temporary madness that affects someone else (which somehow the communities of those many are somehow immune to), or somehow an example of how the Left could only win because cowards on the right preemptively surrender.

Neither of those views, however, bear any semblance of reality.

Both of these views assume that the sense of “normalcy” that such view-holders have is indeed the framework upon which American society firmly sits, and the consequence of that view leads to either the expectation that “it couldn’t happen here” or that it can only “happen here” due to preemptive surrender. Neither view considers that the groundwork by the Left hasn’t already rotted the pillars of society and instituted a framework sub rosa conducive towards the Left’s beliefs and ethos, leaving only a superficial shell ready to be replaced be a “new normalcy” custom fit for the new framework.

There is no better demonstration of this fundamental change that so many are blind to, including those who now wholly agree with the new way of thinking, than the redefinition of fundamental terms and double-meaning of slogans. For example, to many, “man” still refers to a biological male and that gender is a synonym for biological sex; but for increasingly “gender” is defined as an “identity” that is separate and district from biological sex (which is now considered a spectrum or even nonexistent as a category) and that insisting that a “trans-woman” is a “man” is pure ignorance.

Such is also an example of what racism means. The term “racism” means, though increasingly rarely, the idea that one race is superior to another and the assorted actions and behavior thereof. However, the “academic” definition of racism is a combination of not only a belief in racial superiority/animus, but also of being in a “position of power”.

White people, for example, have the unsrivable sin of “Whiteness” and can only be tolerated if they actively destroy this “Whiteness” that somehow flows through them like the Dark Side of the Force.

This is quite literally Original Sin for social politics. No Tabula Rasa. You're born a "bad white" and need to actively follow certain rules in order to be a "good white." You think terms like "the religion of social justice" is hyperbole until you read this in the NY Times. pic.twitter.com/B03qlnyPqS

This is where “allyship” comes in. Oh, not being an ally to individuals, but an ally to identity groups and to the Leftist ideology that exploits the same. It does not erase the original sin of “Whiteness” (or more intersectionally the sings of “cis-nomativity”, being straight, being a biological male, &c.), but it provides temporary protection and perhaps a bit more than others, like a “House Slave” in the antebellum South vis-à-vis the slaves in the field. And yes, this parallel is quite ironic.

This, in effect, means that only and all White people are racist because of the belief that Western Civilization is fundamentally about racial oppression, discrimination, and slavery. This is what is generally referred in one permutation or another to as “structural racism” (a “formalization of a set of institutional, historical, cultural, and interpersonal practices within a society that” effects racism), “institutional racism” (A “form of racism which is embedded as normal practice within society or an organization.”), and “systemic racism” (“[A] claim that the United States was founded as a racist society, that racism is thus embedded in all social institutions, structures, and social relations within our society.”).

It thus becomes a sacrosanct article of faith, then, that America was founded upon racism, with the consequence that racism can not be removed from America, with the only option left being to reject America and build up a “non-racist” society in opposition.

However, most people don’t understand this difference and distinction between definitions of racism and what racism means when modified by the adjectives systemic, institutional, or structural, and the Left take full advantage of this through a dishonest con involving a Motte & Bailey fallacy. If you say you do not believe in systemic racism (the Bailey), then you are said to deny any racism (the Motte); vice versa if you want to avoid being seen as supporting any racism you are forced to accept that America (and Western Civilization at large) is systemically racist thus requiring one to be in opposition to American/Western culture and society… all to avoid the appellation of “racist”.

Denying the existence of systemic racism (i.e. the belief that America was founded on racism and is fundamentally racist with said racism being the core being of America), means you are definitionally supporting racism. To put it another way, you are either with them, or against them. You are either support “racism” or you are an “anti-racist” who supports the integral racism of the status quo.

All this did not just suddenly pop into existence. The reason that no one stopped this is because almost no one saw what was happening, because rather than a direct assault, the very fundamental precepts of society, which had been taken for granted and not given a second look, were replaced slowly over time with care taken to not change the appearance of the superficial edifice… until everything was in place and the superficially radical change erected and fitting perfectly into the new precepts of society. It’s not that “cuckservatives” preemptively surrendered like cowards or to be invited to “cocktail parties” or “cruises”, it was the recognition that in reality it was no longer a matter of defeating the status quo from an attacking enemy, it was about trying to stop the new status quo, either trying to stop its cancerous spread or trying to lay a groundwork for reversal. Because of the nature of this change, the idea that “it couldn’t happen” here ought to be dismissed as dangerous, for when the Red Queen is shown, many, if not most, of those one considered their ideological allies will accept the new way of things and think you backwards if not evil for not going along.

The evidence of just how prevalent this new “wokeness” is, and how easily it has wormed sub rosa into the institutions via þe olde Gramscian march is increasingly manifest.

It isn’t even just the usual suspects, such as the Martin Luther King, Jr. County labor council purging themselves of the police union, Michigan State University purging Vice-President of Research for politically incorrect scientific statements made in the past, or a student newspaper purging unbelievers who deny “systemic racism”. Even the long decline of the Boy Scouts has resulted in mandating that scouts get a badge for wokeness as a prerequisite for becoming and Eagle Scout.

Anyone associated with sports will be made to atone for failing to endorse “anti-racism”. County health boards are not declaring racism to be a “public health crisis” as if people with incorrect thinking are mentally ill or that America itself is the equivalent of a plague. We even see professional organizations and publications for the sciences and engineering declare solidarity against “systemic racism” or even offer advise on taking down politically incorrect monuments.

These slogans and terms are not so much merely an Orwellian redefinition of the language, but have become Shibboleths. #BlackLivesMatter is another example of a Motte & Bailey fallacy forcing people to either obey or be unpersoned. If you don’t agree with the movement and organizational goals of Black Lives Matter (the Bailey), then you are condemned as not believing that the lives of any Black person matters (the Motte).

This isn’t just some mere anti-Americanism; it is religious zealotry, and the institutions marched through by the Gramscians are now this new faith’s churches, with all that comes from them being catechisms of a secular faith, all of which justify anything and everything that may come. And the inquisitors will be everywhere.

Guys, stop thinking about this iconoclasm as some rational reckoning with the past and start thinking about it like a religious movement aiming to remove sin and impurity. And I mean this not as an insult but as a simple definition of reality.

Sometime people make it easy for the Left, such as is the case with Confederate statues, which are indeed monuments to those who fought America in order to protect slavery. This was a “heads we win, tails you lose” scenario: If one opposed removing the statues on the correct belief that the modern-day iconoclasts wouldn’t stop there, then the evils represented by the Confederate monuments would be conflated with all monuments to American history and even Western Civilization; but if one allowed the removal of Confederate statues, then it made it that easier to remove any statue by slowly increasing the degrees of abhorrence to the point where memorials to abolitionists who stood against slavery are considered to protect the status quo of inherently racist America by portraying any part of America’s history as anything but pure distilled evil.

Too much of the populist Right seems to think you can fight something with nothing; that it's enough to just say "no." But you can't. To compete with the Left, you need a narrative of your own, grounded in truth, that withstands scrutiny & attracts the uncommitted.

The Left has created it’s own narrative of American history which now pervades society because it filled a void left by those who didn’t bother to teach newer generations under the assumption that self-evident truths were universally self-evident.

Even now, it is not too late to stop the march of the rabid Left, or at least not to late to endure to keep and preserve America’s heritage, history, and promise to the future. But to do so we must not only understand what the Left believes and how it has wormed its way into institutional, systemic, and structural power, but more importantly to know what it is we are defending and how we can communicate these eternal truths to those who now find those truths to be alien, if not sacrilegious, and convince them of their veracity as the harbingers of that shining city on a hill.

2 Responses to Systemic Oppression, Mandatory Allyship, and the March Through the Institutions