Surprise! The Media Lies About a War On Women

The media is obsessed with declaring that Republicans are waging a war on women, while ignoring the many, many, many very real actions of Democrats.  This is not to say that all Republicans are angels, but that by and large the stereotype of Republicans wanting to keep women barefoot and pregnant is hogwash.  When the media can’t find a real example of a Republican being truly anti-woman (i.e. the vast majority of the time), they simply distort the truth or just out right lie and invent their own false narrative.

A perfect example of this is the recent brouhaha over a speech that former Arkansas Governor Mike Huckabee gave.  Let it be known that your humble author is not a supporter of Huckabee, and in actuality does not care for him.  There is plenty to be said against him, but nonetheless, when the media distorts what he said and unfairly attacks him, one must stand up for the truth.

Huckabee accused the Democrats of denigrating women and their political interest as being of a base sexual nature, and further of considering them incompetent to the point where they need “Uncle Sugar” (AKA the government) to subsidize a hyperactive sex life.  This is a despicable view, and Huckabee condemns it. His exact words were:

“I think it’s time for Republicans to no longer accept listening to Democrats talk about a ‘War on Women.’  Because the fact is, the Republicans don’t have a war on women.  They have a war for women – for them to be empowered, to be something other than victims of their gender.

“Women I know are outraged that Democrats think that women are nothing more than helpless and hopeless creatures whose only goal in life is to have a government provide for their birth control medication.  Women I know are smart, educated, intelligent, capable of doing anything anyone else can do.

“Our party stands for the recognition of the equality of women and the capacity of women.  That’s not a war on them, it’s a war for them.  And if the Democrats want to insult the women of America by making them believe that they are helpless without Uncle Sugar coming in and providing for them a prescription each month for birth control, because they cannot control their libido or their reproductive system without the help of government, then so be it.  Let’s take that discussion all across America, because women are far more than Democrats have made them to be.  And women across America have to stand up and say, ‘Enough of that nonsense.'”

Yet the rabid Leftist media claimed that those were his thoughts, and that he was being “anti-woman” for pointing out that that is how the Democrats think, and that such sentiments are wrong!  The constant denouncement can even sweep up otherwise sober minded individuals.

Is his claim a fair one?  The “Life of Julia” is an explicit example of the Democrats believing that a woman needs the government to act as a “sugar daddy.”  Does the Obamacare add seen below support Huckabees accusation? 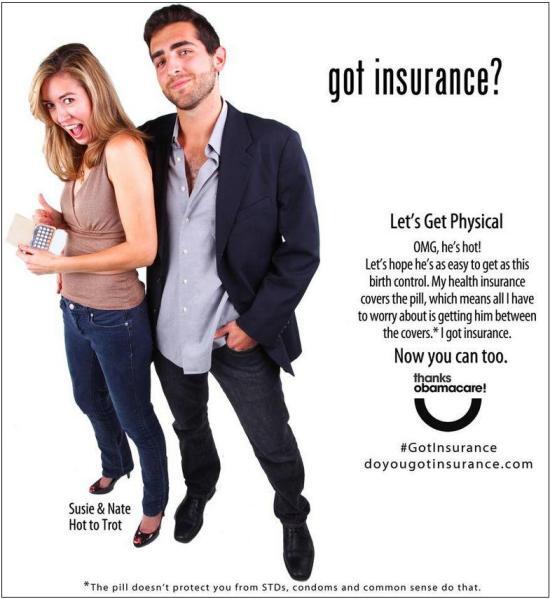 Clearly, Huckabee was dead-on accurate about his accusation.  But the truth never stopped the lying lap dog media from distorting the truth and declaring that denouncing misogyny is itself misogyny, or that war is peace, or hate is love.

A perfect example of this can be seen by a producer of the Rachel Maddow show, Steve Benen.

Mr. Benen commented on Huckabee’s statement in a truly juvenal and dishonest way.  He, of course, does not bother to dispute what Huckabee actually said, and “[r]ather than go word by word” prefers to make insinuations, ridiculous assertions, and ad hominem attacks.  He starts out by spouting the stereotype of social conservatives being totally ignorant about reproductive health while making the false insinuation that it is Huckabee’s belief about “the connection between birth control and libidos” when it is clear from the quote that Huckabee is pointing out that it is the Democrats who are making that connection.  Mr. Benen then goes on an ad hominem attack against Huckabee declaring him “mean” and making accusations backed up by Leftist blogs.  Since Mr. Benen can’t argue against the message, he attacks the messenger.  Truly pathetic.

Most laughably, he viciously attacks Huckabee for signing a law that happened to include a contraceptive mandate.  Obamacare forces businesses and non-profits to pay for insurance where contraceptives are to be given out for free.  It clearly impacted many businesses and non-profits in a way that the Arkansas law (as well as others) did not.  It does not detract from the validity of the position that businesses, individuals, or non-profits should be forced to directly pay for health plans that provide contraceptives.  With this issue coming to the fore, why shouldn’t Republicans, who didn’t vigorously oppose even tangentially similar proposals before, now oppose a far more odious imposition?  Can not a politicians position change with changing circumstances or be swayed due to argument and discussion?  By Mr. Benen’s logic, Obama’s argument for same-sex marriage ought to be considered invalid and Obama be made subject of ridicule and ad hominem attacks because he used to publicly hold a contrary position!

This entry was posted in Progressives and tagged Gender, GOP, Mood Music, Obamacare, War on Women. Bookmark the permalink.

2 Responses to Surprise! The Media Lies About a War On Women