Under Obamanomics, people have been dropping out of the workforce, which results in an artificially low unemployment rate.  The labor participation rate has been stagnant, or depressed, if you will.  What is most worrisome is that the jobs that America is producing are increasingly part time jobs.  In large part, this is due to the effects of Obamacare, where small businesses are penalized for hiring full time workers due to healthcare mandates, but where those penalties can be avoided by only hiring people part time.

This is not a flaw in Obamacare.  It is one of its fundamental designs. 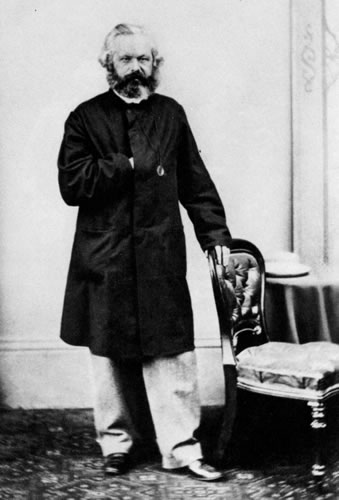 “Hand in hand with the “amelioration” of working conditions goes the shortening of the working day. This is accomplished without any decrease in the total social product. In the only instance where figures are given, it appears that the working day will be cut in half. Marx explains how this is possible: ‘If everybody must work, if the opposition between those who do work and those who don’t disappears…and moreover, one takes count of the development of the productive forces engendered by capital, society will produce forces engendered by capital, society will produce in 6 hours the necessary surplus, even more than now in 12 hours; at the same time everybody will have 6 hours of “time at his disposition,” the true richness…’ In communism, it is not material objects but free time that is the substance of wealth. Another basis for Marx’s optimism is seen in his claim that shorter work days will mean greater intensity of labor for the time actually at work.”

Marx believed that the workers created all the profit and the Capitalists just stole the workers profit.  If the Capitalists were eliminated, than the workers would be able to have all the profit, or alternately reduce their working day (i.e. work part-time) or otherwise help others that didn’t have anything because the evil Capitalists stole it all in this zero-sum game.  As such the “surplus wealth produced by working people would be used to provide better wages, benefits, healthcare, education, safety conditions, new technology that could reduce the working day, etc. – instead of for the private gain of a handful of people while millions starve, are homeless, and unemployed.”   With everything magically provided for with less actual work, innovations will magically pop up to spur on a near “purple wage” scenario where “[n]ew technology and greater productivity of labor will lead to a decrease in the working day, to more time for study, travel, exploration, research, music, art, culture, etc.”

The basic idea is that employers and business owners are just stealing the labor of others and parasitically give nothing in return is ridiculous on its face.  If you remove the “Capitalist” and all the capital that they provided, then the workers would indeed have 100% of nothing.  The relationship is not one of parasite and slave.  It is the free interaction of free individuals.  Each provides something that is more valuable to the other side than what they are providing is to them.  A workers time and energy are worth more to the employer than the pay and compensation provided to the employee.  The paycheck and other benefits from the employer is worth more to the employee than his or her time and energy.  Each one benefits; if they did not, then the employee would not work for a willing employer.

This idea isn’t just limited to explicit Marxists, for even John Maynard Keynes thought that only 15 hours per week were necessary.  The Marxists dream of a utopia where people barely have to work at all:

“Even at the present stage of economic development, if everybody worked and there was no waste, a universal four-hour day would undoubtedly be enough to provide abundance for all in the advanced countries. And once the whole thought and energy of society is concentrated on the problem of increasing productivity, it is easily conceivable that a new scientific-technological-industrial revolution would soon render a compulsory productive working day of four hours, throughout the normal lifetime of an individual, so absurdly unnecessary that it would be recognised as an impossibility.”

How does this square away with the corporatist vision of the Progressive left, including Obama?  Simple!  One just has to remember that there are always some who are “more equal than others.”  The chosen elite, as always exists in Communist regimes, will create a “new feudalism” where “the workers” don’t even have to work!    How can this be?  Again, for the rabid left, it’s simple:

“Both manual and intellectual activity for a part of every working day, for, according to Marx, “the antithesis between mental and physical labor has vanished.” Human kind is no longer divided into sheep and goats, and given their work tasks accordingly. The individual is declared rich in communism because he/she needs the “totality of human life activities.” And he/she enjoys them, to a large extent, just because they are so varied.”

It is the vision of hipsters!  They do some meaningful labor that everyone shares and benefits from and spend the rest of the time enjoying the meaningful labor that everyone else shares and benefits from.  Not just the labor of working at some meaningful dream job, but of a collective total existence.  They think that they can work as a barista and then spending the rest of the time doing poetry, studying Marxist philosophy, enjoying interpretive dance, &c.… all without parasitically sucking off of the trust fund set up by Mommy and Daddy.  It is the dream of eternal college and student co-op.

In this utopian vision we all labor for each other and are benefited by the labor of others.  Our entire life and reason for existence is to sustain this vision of the enlightened elite.  This is because “work,” according to the Marxists,  will no longer exist as we know it:

“The second is that notions of what constitutes work will change. ‘Work’ as we understand it is a capitalist notion – it is intentful activity that produces economic value. Since communism involves the breakdown of the value concept, the distinction between value-producing activity (work) and non-value-producing activity disappears, and some other way of distinguishing between useful activities will come to take its place. In this sense, it would be hard to speak of a ‘working day’ in the way that we do today. This famous quote from Marx gets at the change that I am talking about:

“‘For as soon as the distribution of labour comes into being, each man has a particular exclusive sphere of activity, which is forced upon him and from which he cannot escape. He is a hunter, a fisherman, a shepherd, or a critical critic and must remain so if he does not wish to lose his means of livelihood; while in communist society, where nobody has one exclusive sphere of activity but each can become accomplished in any branch he wishes, society regulates the general production and thus makes it possible for me to do one thing today and another tomorrow, to hunt in the morning, to fish in the afternoon, rear cattle in the evening, criticize after dinner, just as I have in mind, without ever becoming hunter, fisherman, shepherd or critic.'”

In this vision, a person doesn’t “work,” but rather lives a meaningful life, not only for themselves, but for others as well.  When everyone lives a “meaningful life” as the elite envision it, then happiness and prosperity spontaneously pop into existence since the purported sole cause of evil (i.e. private property and the free market) has been dispensed with.  This is unrealistic and has always failed in practice, and this is blamed on the civic heritage of America, to which it is antithetical.  This is why Marxism isn’t just about economics, but redefining the entire social fabric to suite the utopian dreaming of the enlightened few.  As they see it:

“If ‘capitalism’ is not only describing a way of producing wealth but rather a system of society, in which we live and are to a great degree engulfed, how could we even talk about how one of its key categories, i.e. labour, would be like if we lived in another society?”

There would be no “work,” but an enraptured existence where everyone shares with each other in an absolute, though unreal, freedom.  It is, fundamentally, a false vision.  In all irony, it is the free market and the values of Western Civilization that make it possible for people like Marx to come up with their daydream filled fantasies.  This is the delusion that Obama and his fellow travelers in Progressivism believe in… or at least pretend to.