The Nudging of America

The Obama administration is hiring a “Behavioral Insights Team” in order to tweak and alter people’s behavior without them noticing.  Such dark shenanigans are referred to as “nudges,” the term deriving from Obama’s fellow traveler Cass Sunstein.  The problem with this is manifest:

“‘Ultimately, nudging … assumes a small group of people in government know better about choices than the individuals making them.’ 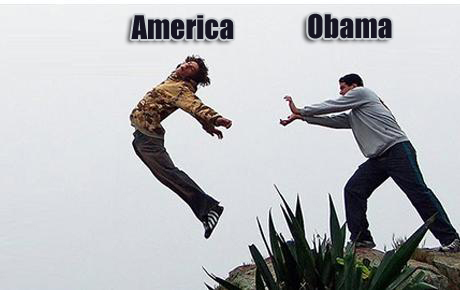 At first this might seem odd, since Obama has often said that “the government is us,” and expressed the sentiment that everything he does is legitimate because the people elected him, as well as how he is but expressing the volonté générale, because that is what the people want.

Why, then, would Obama need to “nudge” the people to accept his agenda, if it was the embodiment of their will that he is divining like an auger poking through rooster guts?

The answer is simple: Sometimes the people do not express the will of the people, particularly at those annoying elections where a majority wins that doesn’t support the pre-chosen path “forward!”  Obama believes in a political philosophy where all the people allegedly have a say, which is to really say, that none of the people have a say, because that “general will” can only be divined by the transcendent beings such as himself:

“Grouped according to their several interests, individuals form classes; they form trade-unions when organized according to their several economic activities; but first and foremost they form the State, which is no mere matter of numbers, the suns of the individuals forming the majority.… [It] is therefore opposed to that form of democracy which equates a nation to the majority, lowering it to the level of the largest number; but it is the purest form of  democracy if the nation be considered as it should be from the point of view of quality rather than quantity, as an idea, the mightiest because the most ethical, the most coherent, the truest, expressing itself in a people as the conscience and will of the few, if not, indeed, of one, and ending to express itself in the conscience and the will of the mass, of the whole group ethnically molded by natural and historical conditions into a nation, advancing, as one conscience and one will, along the self same line of development and spiritual formation.”

Yet again, the past is prologue…

This entry was posted in Progressives and tagged Leviathan, New Feudalism, Obama, SCoaMF. Bookmark the permalink.