The great narrative lie of the Left was not imposed all at once, but slowly introduced, and at younger and younger ages in order to normalize the abnormal and invert social norms. This is happening throughout the Western world… including Australia:

“Yet rather than stealing their wealth – although they are doing that too – this new gang of con artists is pickpocketing mainstream Australia’s, and the West’s, cultural values.

“These values are being pilfered from the decent, freedom-loving, overly-complacent majority by a growing leftist, socialist minority for whom the hard-working Aussie is a figure of ridicule and contempt.

Oh, this isn’t just a new con, but rather the old one escalated to over 9000 due to the success of the Gramscian March… 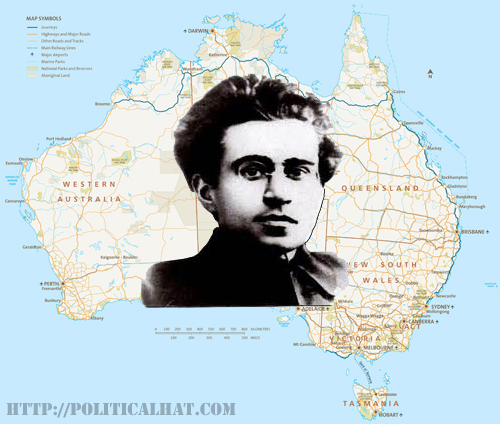 “It is not only the religious bodies who should be concerned that their freedoms are being stolen from them. All parents should now be afraid of what the future holds for their ability to educate their own kids about love and sexuality.

“Next comes the great scam of our history and race relations, with the indigenous grievance industry in full flight over such trivialities as the meaning of the word ‘discover’, whilst the Left turns a blind eye to young Aboriginal kids forced to endure poverty, ill-health, violence and sexual abuse. All so as not to be tainted by another meaningless word: ‘racism’. Indigenous Australia is being ripped off by wealthy activists more interested in attacking colonial history than helping those most in need to get a better life. Meanwhile, thanks to the myth of multiculturalism, non-integrated enclaves spring up in our suburbs, fostering cultural/religious acrimony and division.”

The Gramscians march everywhere. We either fight back or accept defeat; there is no where to escape to.

One Response to The Great Australian Cultural Swindle