On birth certificates, there are places to state a child’s father and a child’s mother. Why? Because a child is conceived from their father’s sperm uniting with their mother’s egg. Marriage arose as a way to channel the normal heterosexual activity between the two sexes into a stable monogamous relationship that would serve as a societal pillar and optimal environment for offspring resultant from such normal heterosexual inclinations. Married couples were listed as a child’s natural and thus biological parents because the law presumed that a child was the product of the marriage, that insurance being why men had a reason to enter unto. This is common sense, unless you think that children come to parents via a stork… 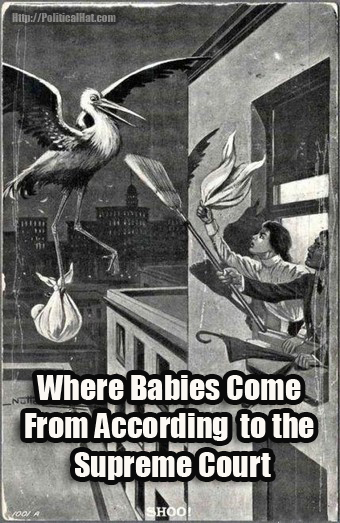 The Supreme Court, in all its derision sanity, has decided that the plausible biological presumption, that a married couple are the natural and biological parents of a child, somehow impossibly applies to same-sex couples:

“Arkansas had resisted, arguing that the birth certificate was a record of parentage for the child, rather than a document about the marriage.

“But the high court rejected that argument, saying that in situations where a child is conceived from an anonymous sperm donor, the mother’s husband is still required to be listed. Denying that same accommodation to same-sex couples violates the 2015 Obergefell ruling that established a national right to same-sex marriages.”

The Supreme Court, in Obergefell rules that there was no distinction between opposite sex marriages and so-called same-sex marriages beyond “irrational animus”. Apparently objective and obvious biological reality is not “irrational”.

There are physical and actual physiological differences between the two sexes. We are a dimorphic species that reproduces sexually via coupling between males and females. It can pre presumed, according to social dictates, that a child of an opposite sex marriage is the product of such coupling.

In contrast, it is biologically impossible for a child to have two natural and biological parents of the same biological sex.

This is as insane as when California declared that a gay couple not being able to produce a child between them were infertile because a straight couple not being able to do so either is considered proof of infertility. Of course, that a straight couple attempt to reproduce through the normal means of coitus is something that a same-sex couple are biologically incapable of, is irrelevant to the revealed truth of social justice that asks not what scientifically is or is not, but how many queer genderfluid snowflakes can twerk at the end of a pins…

Just goes to show, that as far as the law is concerned… reality is just a social construct…

This entry was posted in Progressives and tagged FacePalm, FAIL, Gender, Social Justice. Bookmark the permalink.