What Will Be What Marriage Once Was?

The Progressive Left are on the verge of succeeding to redefine marriage to be just a set of legal privileges handed out to two, but only two, people.  How much longer they will feign to be “duo-normative oppressors” before coming out in favor of group marriages (among other “marriages”) remains to be seen.  But they will nonetheless pat themselves on the back that they have successfully smashed a pillar of society, and readied the remains for remolding in their image.

But if “marriage” has been redefined to be something that it is not, then what new term shall we use to represent what “marriage” used to represent, and to many still does?

The Oxford English Dictionary is now considering redefining the word marriage to make it irrespective of biological sex (or gender).  The OED already notes that in some jurisdictions, the word “marriage” is inclusive of same-sex unions, but with the U.K. going gay for gay marriage, the OED will likely relegate the actual definition of marriage (as being between a man and a woman) to archaic use status. 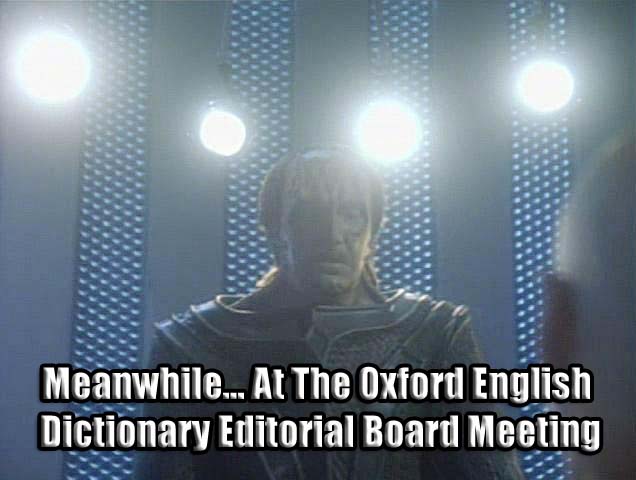 Similarly, the “critical gender studies” crown has not only declared “gender” to be a social construct and completely different than biological sex, but have turned male and female pronouns that originally indicated biological sex into mere preferences for a person’s “chosen gender.”

The problem with this is that marriage is not just a package of legal benefits between two persons, but a “social recognition of the natural complemency of women and men.”  Further that:

“Since the combination of man and a man or woman and a woman does not exploit this natural complementary dualism of man and woman, and thus can not benefit by it because it is fundamentally different due to the fundamental differences in people’s biological sex (not “gender” or sexual orientation), gay marriage only bring a false equivalency at best, or at worst simply co-opts a word and destroys what it once meant.”

Same-sex marriage proponents have not won marriage, but simply the legal right to use the word, and to impose it on others.  Since “marriage” no longer means what it meant (i.e. a natural union between the two complementary sexes), it no longer has the meaning and social importance that it once had.

However, the need for social norms that drive men and women together, where each sex can temper and complement each other in such a way as to benefit both, and to form the basis of a family, and thus society, remains.  The war on marriage has been a war on boys, and already we are seeing societal breakdown resulting from single motherhood, the lack of male role models for children, and increasingly feral young men.

Marriage serves to provide stability for children, giving them both a mother and a father.  Instead of relying on the government like perpetual children, men and women can rely on each other, with both husband and wife providing something that the other can not.  It becomes normal for a man to provide for his wife and children, as it becomes normal for a woman to provide for her husband and children.  There is a socially normative place where a men’s drive and energy can be channeled and utilized for their own benefit, the benefit of their children, and thus strengthening society, even for those who do not partake traditional marriage.  Similarly, a woman becomes far more independent than those who have to rely on the paternalistic hand of government.

Marriage was not designed by social scientists or by the government.  It naturally and organically arose from the ancient past.  It persisted because it provided that social stability that allowed societies to continue to exist.  The erasing of this is folly at best.

Seeing the need for the mores, folkways, and social norms geared towards uniting men and women into a committed union and family, it become necessary to create a new legally and socially recognized union that explicitly serves to unite men and women, and exploit the natural complemency of the two biological sexes.  This used to be what marriage was for, but since the word “marriage” has co-opted and now means something completely different, and new term is needed.

What then, ought to that new word be?

2 Responses to What Will Be What Marriage Once Was?