Euthanasia No Longer a Choice in the Netherlands

Just when you thought the Netherlands couldn’t become more morbidly—insane with their obsession for slaughtering people via euthanasia, from killing children and ripping organs from the still living, to legitimizing ennui as a medically appropriate reason to die—the Dutch have proven that nothing to do depraved and barbaric for their euthanasia lust: It is now legal for a doctor who euthanasia someone who is actively declaring that they want to live while struggling physically against their own murder:

“A Dutch woman doctor who asked an elderly patient’s family to hold her down while she administered a fatal drug dose has been cleared under Holland’s euthanasia laws.

“In this case, the woman, who was suffering from dementia, had earlier expressed a desire to have her life ended when she felt the ‘time was right.’

“According to case notes, the woman, who lived in a nursing home, showed signs of fear and anger. She would also wander around the premises at night.

“The end came when a doctor put a soporific into her coffee before administering a lethal injection.” 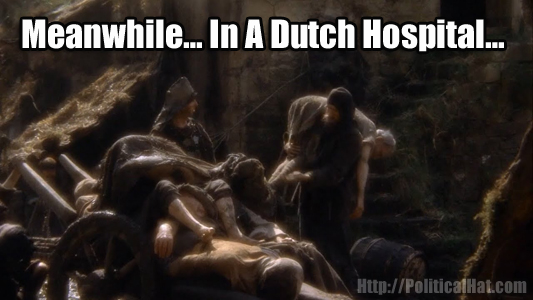 But as the doctor tried to administer the injection, she began to struggle and the doctor had to seek the family’s help to complete the procedure.”

The most disturbing part is the fact that it appeared that they knew the patient wouldn’t “go gently into that good night” by slipping the patient a “mickey“:

“Before administering the lethal dose, the doctor drugged the patient’s coffee with a sedative. People are rightfully outraged when a college student slips a date rape drug into someone else’s drink at a party, and this is just as egregious. She had no idea what they were doing to her, but this doctor gave her a pill so she could be abused in a way the doctor deemed right.

“That sedative was not quite powerful enough, however, because partway through the procedure, the patient woke up and protested. According to the Daily Mail, in the days before her murder she had repeatedly said, ‘I don’t want to die.’ The doctor then recruited family members to restrain the patient while the murder was committed. This is a doctor killing a patient who was making verbal requests to stop the procedure. This is a terrifying situation, and this is murder.”

They are killing people who want to live.

They are killing people who have committed no crime, and want to live.

They are killing whomever they can get away with killing.

They deserve what not even the Jihadis whom have been invited into the Netherlands could deliver thereunto.

4 Responses to Euthanasia No Longer a Choice in the Netherlands