How low in the ratings does CNN have to go before they resort to cannibalism? As low as they were when they decided to have a spiffy segment where one of their presenters drinks from a skull and eats human brain.

To be fair, if a cannibal threatened to cut your head off, you might just nibble on a bit of gray matter…

“The Aghori persuade Aslan to bathe in the Ganges, a river that Hindus considers sacred. An Aghori guru smears the ashes of cremated humans on his face. And, at the Aghori’s invitation, Aslan drinks alcohol from a human skull and eats what was purported to be a bit of human brain.

“‘Want to know what a dead guy’s brain tastes like? Charcoal,’ Aslan wrote on Facebook. ‘It was burnt to a crisp!’

“At one point, the interview soured and one cannibal threatened Aslan: ‘I will cut off your head if you keep talking so much.’ Aslan, in turn, said to his director, ‘I feel like this may have been a mistake.’

“And when the guru began to eat his own waste and hurl it at Aslan and his camera crew, the CNN host scurried away.” 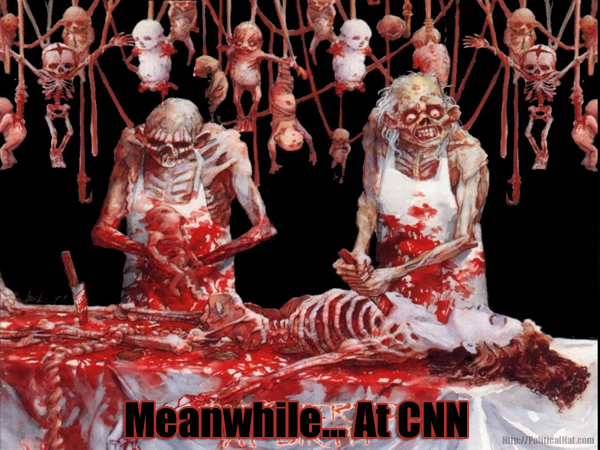 At least they didn’t film an abortion wherein the abortionist was wearing a clown costume.

This entry was posted in Uncategorized and tagged Mood Music, WTF. Bookmark the permalink.