The impetus to grant human rights to nature is well known, in both theory and in actual implemented practice. But this is not just some secular legal technical equivalence for the purpose of preventing pollution and the like, but a form of magic and throwback to animism, which is increasingly being adopted by denominations of a certain monotheistic religion: Christianity.

Now, a seminary in Harlem is having people, in chapel, offer confession—not to a priest or directly to God—but to plants, describing payer to… plants (which are described as “beings”).

Today in chapel, we confessed to plants. Together, we held our grief, joy, regret, hope, guilt and sorrow in prayer; offering them to the beings who sustain us but whose gift we too often fail to honor.

What do you confess to the plants in your life? pic.twitter.com/tEs3Vm8oU4

Plants and animals, let alone nature more broadly, don’t have souls according to even the most heretical of Christian sects in the past. Yet these Christians are compromising their faith by mixing it with animism, much in the same way that Santaria incorporated voodoo and other such beliefs into a veneer to Catholocism. Union Seminary goes so far as to justify this by a call for, not only Christians but those of other faiths, to “develop new liturgies” and using the excuse the “[m]any faiths and denoms have [such] liturgy” for atoning for harm. 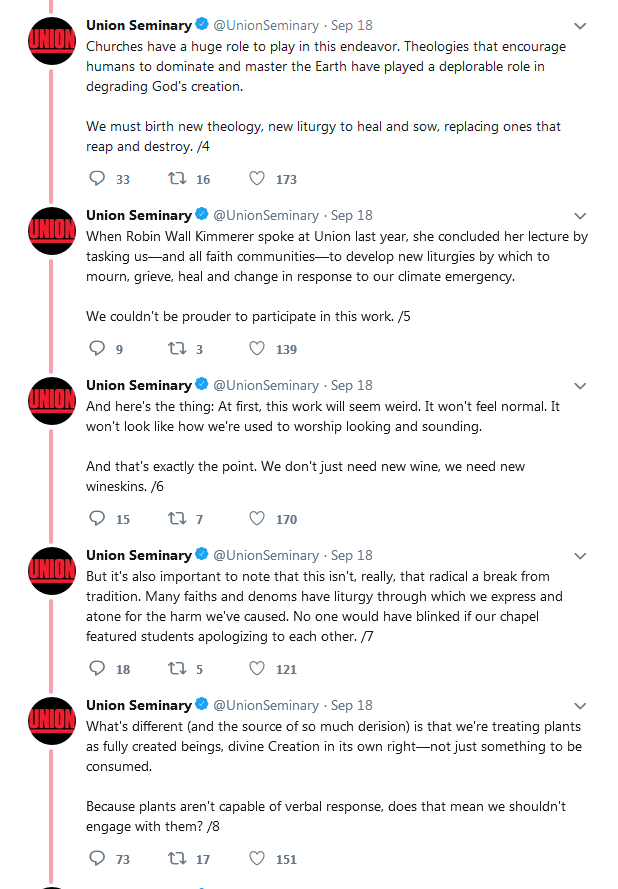 This further, equivocates humans and plants as “divine Creation”. This is one step away from outright admitting that plants have souls.

Oh well, two millennia wasn’t too bad of a run…

This entry was posted in Progressives and tagged FacePalm, Green, Social Justice, WTF. Bookmark the permalink.

2 Responses to Shamans of Christianity