For many on the Left, evolution is merely a justification for mocking those who believe in a literal interpretation of the Bible (but not the Koran, because that’d be racist or something). By and large, many who so openly mock the “Bible thumpers” reject evolution when it comes to differences within our species or when it comes to evolutionary anthropology, and instead posit that evolution ceased to happen with human beings, who are now merely like clay to be moulded. 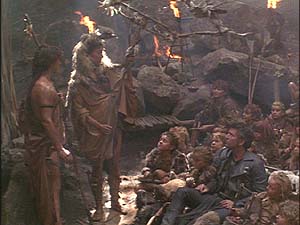 Meanwhile, in an Australian University…

Indeed, “social justice” can actually mandate the teaching of creationism… just as long as it isn’t that “silly sky man” and rather an enlightened Aboriginal “way of knowing” which involves “Spirits” creating Australia and the Aboriginal peoples at the same time. Even YHWH had to create the Earth and Man on different days, so take that “silly sky man”, right?

“Lecturers at the University of New South Wales ‘have been warned off making the familiar statement in class that “Aboriginal people have been in Australia for 40,000 years”‘ […]

“Instead, they should state that ‘Aborigines have been here “since the beginning of the Dreaming/s” because this “reflects the beliefs of many Indigenous Australians that they have always been in Australia, from the beginning of time, and came from the land”.’

“The concept of ‘dreamtime’ refers to an era ‘way back, at the very beginning’ when ‘the land and the people were created by the Spirits.’

“The teaching instructions came from ‘a new set of classroom guidelines, which alert scientists to existing language advice,’ the paper reports.”

Science™, then, becomes the enemy of “social justice” when it “tends to lend support to migration theories and anthropological assumptions”. Research, to the Gramscian marchers of academia, can not be about the truth, but only the Truth™, as the most woke of woke dictate it.

This example is very Australian, in large part because it carries the tone of “the Tell of Captain Walker”…