Buckley Ban On Reddit, Or Perhaps A Prelude To More, Or An Impetus For Less

Apparently a recent post here has been declared so unconscionable by Reddit that your humble author’s Reddit account was suspended for three days. The content of said post being a link to this blog containing… a video of William F. Buckley’s “Firing Line” with guest Allen Ginsburg talking about the “Avant Garde“… from about half a century ago. 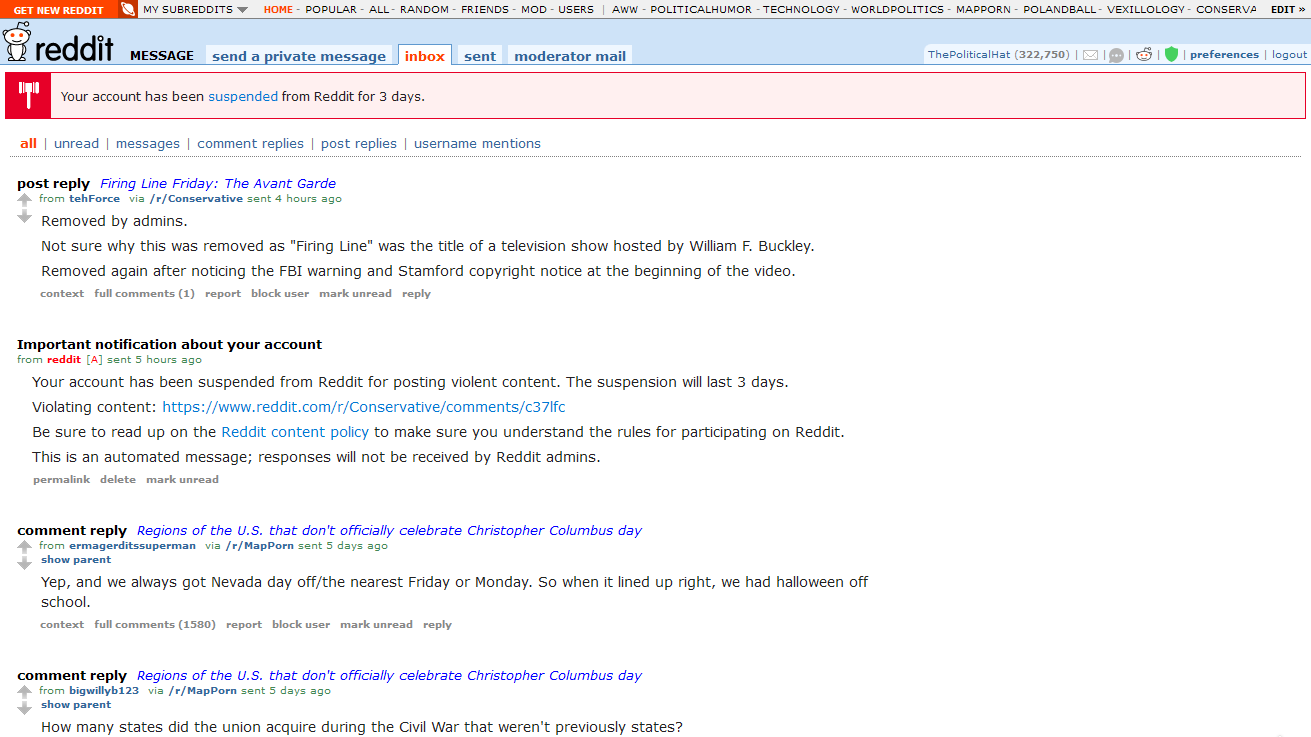 Upon what basis is this done? The video, btw, is on the copyright holder’s own channel that doesn’t disallow embedding.

Does Reddit apply such strict copyright standards to other posts to other webpages that link to yet another’s video service which might or might not contain copyright questionable material?

Does this have to do with the title of “Firing Line” which applies to a show that debuted over half-a-century ago and has nothing to do with “guns” or even a “threat” of violence.

If you believe that William F. Buckley’s “Firing Line” featuring formative figures of the Left is beyond the pale, then perhaps people ought to know your political ideology that determines what the vast majority of Americans, if not most in the world, is presented as absolute truth beyond reproach.

Your humble author is not ignorant of the current and past particulars that have indicated the threat of a select few digital oligarchs ruling over the news, entertainment, and information from which most people derive their knowledge and information. But also, one must be cognizant that any rule that can be used against a gatekeeper can be used by a gatekeeper against you, if power were to shift.

One of the refrains often heard to those who haven’t been purged, yet, from some popular proprietary platform is either an outright, or paraphrased, quote from Martin Niemöller’s “First they came” poem that posited that those who did not object to some more extreme sounding position were guilty of accepting the extreme position of some declared opposition, and so later purged. Divide and Conquer, so as to speak.

Is some transitory governmental control worth the precedent of control by a far more established, in a Fabian fashion, opposition?

Is there such faith that all opposition to what we hold so dear and important is incorporated in some fantastical conspiracy that can be dismissed, leading to a thousand year plus utopia?

The danger has been noted. The answer comes from not more centralization and control, but less.

Oh, it may seem odd to some, but e-mail itself provided the solution.

The response to oligarchical censorship has been, to large degree, to create alternatives that do not appeal to most people but to those who are alienated by platforms that focus on the extremes almost exclusively.   Gab is a platform that appealed to those purged from Twitter, and have thus been tinged with the more extreme elements that were purged from Twitter, rather than the broader ultimate target thereof. Gab has recently stated that they will become interoperable, such that, much like e-mail, anyone can set-up servers that can interact with other servers. This is similar to the GNU Social service, which is somewhat similar to Twitter, but with a construction more akin to e-mail.

How many “big names” so dedicated themselves to one service or that that they didn’t even bother to get their own webpage, as bloggers decades ago knew to do?

I do not claim to be perfect or even a paragon of the internet wars. I have my own URLs and am hosted by those I can trust.   I know that any avenue of interaction that isn’t based on some internet standard (such as e-mail) can be blocked. I try to link to other blogs. I try to offer some alternatives. I try to interact beyond such limitations.

The ultimate solution comes not from regulation by the government, but by actions that compel towards standards of interaction that preclude gatekeeping by anyone. E-mail is but the most obvious example. Standards regarding video, audio, tweet-like snippets, or Facebook-like entries can and will establish an independence from any proprietary platform or blackhole of information. This is a far better solution than empowering one’s perceived enemies by throwing them into the briar patch of regulation.

tl:dr Freedom comes from mutually understood interactions and not from some idiotic governmental mandate.

One Response to Buckley Ban On Reddit, Or Perhaps A Prelude To More, Or An Impetus For Less