The intellectual concept of “decolonization” is not limited to once powerful European empires retreating into a self-euthanizing society embracing their own colonization, but extends to the purging of all rationality and science in the name of embracing “different ways of knowing” from axiomatically purer beliefs and knowledge, such as witch doctors throwing magical lightning bolts and curing diseases like AIDS with vehicle engine cleaning fluid.

And now we have a surge in people who are seeking gold… from the heads of bald men:

“A new superstitious belief has emerged in some areas of Mozambique – that bald men have gold in their head.

“However, the head has to be taken to a witchdoctor who will use magical powers to extract the gold – and make them rich.

“As a result, police say five bald men have been killed in central Mozambique – two in May in Milange district, close to the border with Malawi, and three this month in Morrumbala district.” 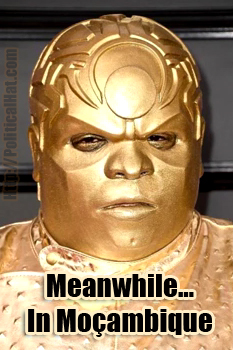 “Our preliminary conclusion indicates that the phenomenon is due to cultural beliefs. We are currently investigating the case to find out more and to understand the dimension of the problem.”

Wait, but I thought that decolonized persons of color would reject the evil and greedy quest for gold and capitalism and stuff by embracing a noble savage utopian socialist lifestyle, just like all those woke White people say!

2 Responses to Decolonizing the Scalp