The Transgender Colonization of Africa

“Delevingne enjoys talking about how she is attracted to both men and women, her self-proclaimed ‘sexual fluidity.’ When people get understandably confused and think she might be gay, she responds that she doesn’t think anyone should be “pigeonholed.” Says Delevingne, “A lot of the friends I have who are straight have such an old way of thinking.” Evidently, assuming that you’re gay or bisexual because you want to sleep with members of the same sex is so 2012.”

“Delevingne especially wants the young girls she works with to know that it’s okay for them to be gender fluid, too. ‘I know 13- and 15-year-old girls who are like, “I don’t know if I like a boy or a girl yet. I haven’t decided.” And it’s like—[imagine] if I was able to comprehend [that at their age]. I am very happy how sexuality has become easier and freer to talk about, especially for kids.'” 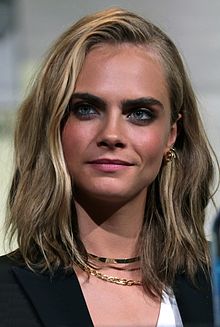 Admit it, you looked if there was an Adam’s Apple, didn’t you?

Not satisfied with wrecking havoc amongst an already tottering Western Civilization, she (???) now wants to push her madness on Africa:

“And as if it’s not enough that she has helped the western world with her barrier-shattering antics, now we are exporting her to Uganda, where, no doubt, adults are thrilled to have her talking to their daughters about all the exciting different types of people they could start sleeping with.

“Gushing about her experience in Uganda, Delevingne explained, ‘What those girls want is so simple, an education.’ They’re getting one, all right, but not the one they need.”

Ironic, since there has been such a rabid and insane outcry to “decolonize” Africa from evil “ways of knowing” allegedly imposed by Western Civilization. One might think that zealots that embrace wizards that throw magical lightning bolts would not be antithetical to anti-scientific ideas regarding “gender”, but one must remember that even such “magical” thinking isn’t so nonsensical as to embrace what could only be the creation of a diseased and moribund Western Civilization: Genderfluidity.

‘Tis true that many in academia who are steeped in the ideology of straight White cis-het men argue that human civilization was always free of the constraints of “gender” or even sexual dimorphism before the eeevil oppressors came and “colonized their minds”, but one notices that these assertations are only being claimed now with little to no evidence actually provided in the past. Oh, those academic reinventors of history claim that the eeevil oppressors hid the truth to create a false consciousness or false social construct, but by doing so, they out themselves as the ones creating the true false consciousness and true false social construct in an expansive demonstration of gaslighting possible only by their intellectually imbred control of academia.

This entry was posted in Progressives and tagged Gender, Social Justice, WTF. Bookmark the permalink.

2 Responses to The Transgender Colonization of Africa