Author Sarah Hoyt points out that for people to fit themselves into society, they must know not only their place in society, but that society wherein their place is.

“Humans are made only partly of physical being, the other part of us story, a myth that extends beyond us.  We’re none of us stupid – or too stupid – we know where we come from and we’ve seen what happens to the generations before us.” 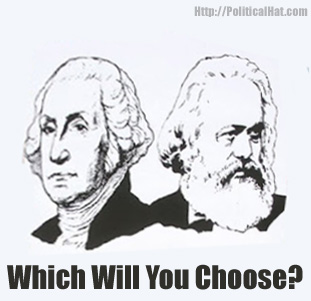 This of course, is the narrative, or story, of ourselves and our culture and society.  It frames how we see ourselves and is the basis for our very views and beliefs.  As Hoyt puts it, “[i]t’s still there for those who believe, to the degree they muster their belief – is that there used to be a civic narrative too.  Patriotism.”

Patriotism, in America, is not defined by race, though.  It is a civic heritage that transcends race and ethnicity.  Our society is not perfect, but it is nonetheless a good one, and by emphasizing the good, we can overcome the bad that arises. Further:

“These narratives weren’t questioned openly, though of course no one but the youngest school children took them literally – no?  Read any books written at the time.  They had as many doubts as we have about the purity and heroism of the past.  They just didn’t obsess on them, and elevate them above the ‘narrative.’

“People might have had doubts aplenty about good queen Bess, but they didn’t tell their children that, when the children were learning the national narrative.  And that meant when the children grew up, somewhere, in the inner recesses of their being, they still took pride in and believed in the greatness of their country and their past.”

But this is being swept away, and that narrative, which upheld and secured for future generations, the unique greatness of that civil heritage is being torn down.

“And meanwhile the only coordinated narrative is Marxism, which is an evil and a blight onto the world, disdaining humans as they really are, considering all wealth theft, and holding up as its highest ideal the sort of equality that’s only possible when everyone is desperately poor.

“How can young people feel inspired to achieve, to invent, to create, when they’re taught the civilization they are born into is evil and that all its ever done is steal from others?  Even though this is patently false, and they should be able to tell by looking around them that no other civilization has tried so hard to achieve prosperity and equal opportunity for all, they’re taught the opposite when they’re very young, and some of it sticks.”

This is what the cultural Marxists do.  They tear down the “superstructure” and instead replace it with a narrative of their own.  In this new narrative, straight White cis-gendered males who were rich oppressed everyone else in order to secure their elite privilege, and all of society was a method of oppression.  In contrast the Progressive forces are presented as a march towards equality and inclusion. This is the battle that they are now winning.

We must recapture the narrative and renew our heritage.  If fail to do that, then any attempt to stop the Progressives’ desire to destroy and rebuild in their image will be lost before the attempt is even made.  People will cling to the narrative they are familiar with because it frames their worldview.  They have to understand it, and it is impossible to understand an antithetical point of view, and “synthesis” does not follow.

This entry was posted in Progressives and tagged Communism, Kyriarchy, Leviathan, Social Justice. Bookmark the permalink.

One Response to America’s Future: A Choice of Two Narratives