Ground Zero of the War for America’s Future

Since an AP study book was revealed to have re-written the 2nd amendment, more textbooks that have been widely adopted and used have been revealed to similarly re-write the 2nd Amendment to falsely make it seem that it only protects the right to join a state militia or National Guard. 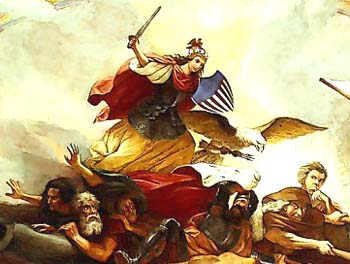 The outrage is in large part due to the success of the Gun Rights activists to not only change and correct the law, but to educate people of the truth.  Our 2nd Amendment rights are one of the few inalienable rights to have been expanded in recent decades.  However, that second textbook had, in the same page as the incorrect summation of the 2nd Amendment, a declaration and critique of the Bill of Rights, and the Constitution, which reveals a far greater vicious mis-characterization of not only the Bill of Rights, but of American history itself.  This is due to the Gell-Mann Amnesia effect where someone who understand a subject readily points out the mistakes they are familiar with… but then don’t consider that the rest of what they are reading/viewing are filled with other errors in other subjects.  The full paragraph written on the page that included the incorrect summation of the 2nd Amendment reads:

“The protection of rights and freedoms did not apply to all Americans at the time the Bill of Rights was adopted.  Native Americans and slaves were excluded.  Women were not mentioned in the Constitution.  Although some northern states permitted free blacks to vote, the Bill of Rights offered them no protection against whites’ discrimination hostility.  The expansion of democracy came from later amendments.  Nevertheless, the flexibility of the U.S. Constitution made it a model of governments around the world.”

In that one paragraph, the fruit from the machinations of the Progressive left are laid bare. The full selection from that school textbook can be seen below under legitimate fair use. This what children are being taught and what they believe to be the unquestionable truth.  The Progressives have always known, since the days of John Dewey, that in order to overturn the mores of society, you have to target the children.  Once they have them blindly agreeing with them because that is all they’ve ever been taught, than they have those children for life.  Any argument against them, no matter how logical or fact-based will have been lost before the argument began.  Our children will have belonged to them already…

This is a perfect example of the importance of the narrative, and how the Progressive Left are winning the future generations be default.  The narrative that they push is that America was an evil place that was at its core full of oppressive H8ers, and only by the light and justice of the Progressive Left have we achieved “democracy,” “equality,” and “justice.”  In contrast they cast anyone who opposes their utopian fantasies is cast as evil incarnate.

The truth of the matter is that our civic heritage was one of true freedom and the idea of “this extraordinary and providential idea that the law does not emanate from the government, but rather the law was already there and the government must be subject to it.”  It is that virtue and heritage which always was an integral part of America and the Anglo-Saxon civilization before it, which allowed people to live in unparalleled freedom while protecting the cultural wisdom and mores that protected against misuse of this freedom.

In short, that textbook is not only denying the existence of the real 2nd Amendment, but laying the groundwork for brainwashing this nations youth to destroy everything that America was, and is.

Out children’s education is “ground zero” for America’s future, and her very existence

Below is a selection from the above mention textbook for critique and analysis.