Racial segregation in schools was, in the 20th Century, a societal cancer of both racism and racial inequality under the law that White Supremacists fought for, that was ended by the banner victory of Brown v. Board of Education.

Racial segregation in schools is, in the 21st Century, a paragon of “Racial Justice” that only a White Supremacist fight against, at least according to supporters of this public school created specifically for “BIPOC” (i.e. “Black, indigenous, persons of color”) students.

“Portland has been labeled the ‘whitest big city’ in America. That can make it difficult for some BIPOC (Black, indigenous, people of color) kids to see themselves reflected in their communities and schools.

“That’s why there’s an effort to make a space specifically for BIPOC students where they feel seen, heard and their experiences are reflected in curriculum.

“‘Every spring we match our kids or mentees with mentors […] and we have more kids wanting to get mentorship than we have mentors,’ Knox said.

“From the beginning, in 2013, Knox said his intention was to open a school for BIPOC students.”

Note how this us justified by essentially saying that “Black, indigenous, people of color” have different ways of knowing that that they are incapable of understanding, at least without greatly “colonizing their minds”, what White (and apparently also “White-adjacent” races/ethnicities). Saying that used to be considered racist and offered as proof by White Supremacists; saying that now makes you a woke racial justice warrior. 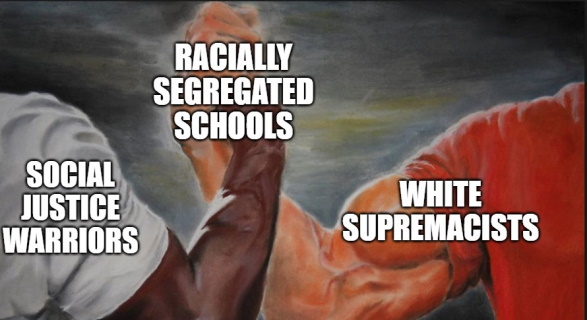 One Response to When Racial Segregation In Schools Becomes Woke