Canada Outlaws Telling Someone They Might Not Be Queer

One of the central tenets of Leftist thought when it comes to “gender” can be found in Critical Theory, namely the believe that, in the case of “gender”, cis-heteronormativity (i.e. dudes who know they are dudes and like chicks or chicks who know they are chicks and like dudes) is an oppressive social construct, and that the only way to counter this is to denormalize “cis-heteronormativity” by declaring it false and ephemeral while declaring “trans” and “queer” gender/sexuality to be the antithesis to the cis-heteronormative thesis, with the counter to an alleged false “essence” being a contrarian “identity” that serves as an “Aufhebung” that allows the immanentization of a gender eschaton.

This can be seen, in practice, by banning “conversion therapies” that seek to convince “trans” kids that they really are “cis”, something that is true in the vast majority of cases where gender dysmorphia doesn’t persist past childhood.   Even openly suggesting that a “trans” kid might actually be “cis” is derided because “transitioning” must be a one-way street, ‘twould seem, especially in Canada. 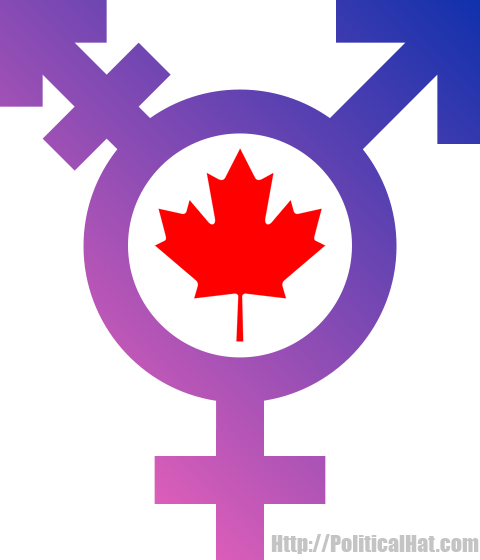 Now Canada has made “converstion therapy” illegal, but only if you are trying to make a trans or queer person cis or straight, meaning that conversion therapy to groom a person into the LGBTQ&c. collective is completely legal in Canada! The key operative section in Canada’s new legislation reads:

(a) change a person’s sexual orientation to heterosexual;

(b) change a person’s gender identity to cisgender;

(c) change a person’s gender expression so that it conforms to the sex assigned to the person at birth;

(f) repress or reduce a person’s gender expression that does not conform to the sex assigned to the person at birth.

Note that this is banned even if the person wants to embrace being “cis” or straight!

And if you defy this ban, you will go to jail.

(a) guilty of an indictable offence and liable to imprisonment for a term of not more than five years; or

320.‍103 Everyone who knowingly promotes or advertises conversion therapy is

(a) guilty of an indictable offence and liable to imprisonment for a term of not more than two years; or

320.‍104 Everyone who receives a financial or other material benefit, knowing that it is obtained or derived directly or indirectly from the provision of conversion therapy, is

(a) guilty of an indictable offence and liable to imprisonment for a term of not more than two years; or

Why such a stiff sentence for trying to do what is claimed to be impossible: Making a gay person straight or a transgender person cisgendered? The only people this legislation protects is those who groom the vulnerable.

Oh, and advertisements for “conversion therapy” is now legally equivalent to child pornography in many respects.

“If the court is satisfied, on a balance of probabilities, that the publication, representation, written material or recording referred to in subsection (1) is obscene, child pornography, a voyeuristic recording, an intimate image, an advertisement of sexual services or an advertisement for conversion therapy, it may make an order declaring the matter forfeited to Her Majesty in right of the province in which the proceedings take place, for disposal as the Attorney General may direct.”