Coming Out Is A One Way Street

Now-a-days, a person who “comes out of the closet” as homosexual is lauded as a brave individual!  In contrast someone who has come to the conclusion that they aren’t really Gay is condemned as a monster.  Even the Federal courts have rules that that is totes OK! 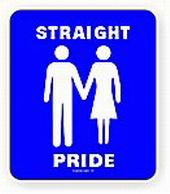 With such hypocrisy established, just image the outrage if the situations were reversed in the following rant by Sally Kohn, a lesbian talking head and blithering idiot, who has recently lamented that her daughter isn’t embracing lesbianism, and in fact is “boy crazy”… while being six years old.

Imagine any celebrity or big name saying this to nodding head rather than pitch-fork wielding mobs!  If anyone declared that “I’m straight.  And I want my kid to be straight, too”, the outrage would be worthy of nationally broadcast rants!

“Kohn said: ‘When my daughter plays house with her stuffed koala bears as the mom and dad, we gently remind her that they could be a dad and dad.”

Despite this child’s upbringing in politically correct ideology, she still recognizes the biological normalcy of having both a mother and a father.

“‘My partner and I certainly didn’t teach our daughter to like pink and ruffles and such. And I can’t fathom some genetic or biological nodule that predisposes my girl to like dolls while little boys like trucks. Baloney.’

“She adds: ‘Even in the midst of our hyper-liberal and hyper-diverse neighborhood with girls and boys of all kinds on display every day, it happened.

“‘Did I do something wrong? Is feminism mysteriously skipping a generation? Meanwhile, I have to bribe her to wear jeans.'”

Maybe… just maaaybe, biology has won out and the child was never a tabula rasa to be brainwashed by hard-Left ideologes.

One Response to Coming Out Is A One Way Street