One of the many claims for justifying euthanasia is the absolute dismissal of the so-called “slippery-slope fallacy”, despite this very slippery slope being demonstrated as anything but. Following the implorations of Belgian and Dutch doctors to let them harvest organs from still living patients as a method of euthanasia, the Canadians, who are no stranger to a bloodlust for killing medical patients, want to follow suit.

“Euthanasia became legal in Canada in June and by December Quebec bioethicists had already published an article in the Journal of Medical Ethics calling for organ donation after euthanasia. In fact, they were reflecting the positive opinions of the both the Quebec government and of Transplant Quebec, the professional association of transplant surgeons” 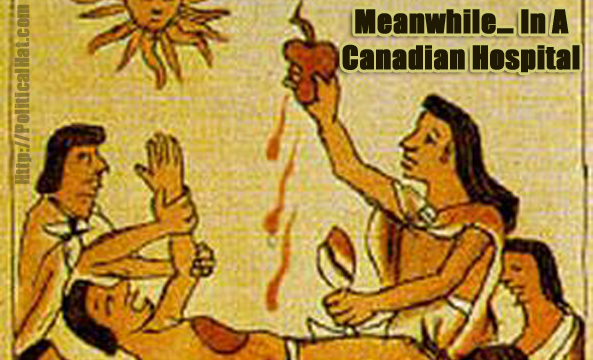 This, of course, is a bad idea to anyone who is not an idiot or a ghoul:

“Of all the bad ideas associated with euthanasia, this must be one of the worst. The potential for exploiting vulnerable people is immense. Imagine that you have recently become a quadriplegic after a motorcycle accident. You are lonely, frustrated, discouraged; you think that life has no meaning, that you are a useless encumbrance on your family and society. You don’t believe the doctors who insist that paraplegics can and do live fulfilling and happy lives.

“One day, from your hospital bed you see a TV program in which a transplant surgeon praises the unforgettable generosity of So-and-so whose life was not worth living but found a way to give life to others, etc, etc. Wouldn’t you think of ringing up the doctor and asking him how to go about it?

“It could get even worse. What if organ donation organisations promoted an standard advance directive which instructs your next-of-kin to arrange for organ donation euthanasia if you become seriously demented? There is no reason why this could not happen. In Belgium, demented people can be euthanized and organs are being accepted, even from elderly people. That would clean out the nursing homes and shorten the kidney waiting list.”

The peer-reviewed article form a “medical ethics” journal in question:

This entry was posted in Healthcare, Progressives and tagged Obamacare, Social Justice. Bookmark the permalink.