Posted on November 7, 2016 by The Political Hat

It’s prediction time! My “official” prediction for the 2016 election are below. This election cycle feels like I’ve been Cassandra to the Trump supporter’s Priam, abet with far more accusations of being an agent for Hillary Clinton and of being a “cuck”. With polling being so scattershot and inconsistent, It’d be more prudent to state a range of outcomes, rather than a specific unwavering number. And, of course, I will abide by Cromwell’s Rule, though the Republicans fortune in many states and races is asymptotically approaching zero.

President. Hillary Clinton, who would have lost to almost any other Republican, will likely win the Presidency 333 to 205.* The map is not an optimistic one for Donald Trump. After seeing the trends in Nevada, I will not assume, as I did in 2012, that the rest of the country is 180° off.

I will discuss Nevada below, but Hispanics have been turning out en masse, which dooms Colorado and New Mexico. I will go out on a limb and predict that this Hispanic turn-out coupled with the Trump Effect will give Hillary a narrow win in Arizona—the second time out of three that a Clinton wins Arizona. Virginia has become a long-shot for Republicans, and Pennsylvania effectively forfeited, and as goes Pennsylvania, goes the election. The Trump Effect may extend to North Carolina and Florida, which would result in Hillary gaining their 44 electoral votes. Arizona, North Carolina, and Florida are the most marginal states, and I wouldn’t be surprised if Republicans keep them; however, even with all three states, Trump will come up short. I am giving Ohio to Trump because his appeal to blue collar working class Whites without a higher education degree is real. It’ll be enough in Ohio, but not enough for Minnesota, Wisconsin, or Michigan due to his disappeal amongst other groups needed to win. I’m also going to go out on a limb and give Trump Maine-2 for the same reason I am giving him Ohio.

Perhaps I am being a bit too pessimistic, but I’d rather be pleasantly surprised than unpleasantly despondent. With this election showing so much uncertainty, I’ll state an Electoral College range from best case scenario for Trump of 260 Electoral Votes to Hillary’s 278; Hillary’s likely best case scenario is to win with 353 Electoral Votes to Trump’s 179 (with 6 EV going to McMullin in Utah). Anything within this range is plausible. 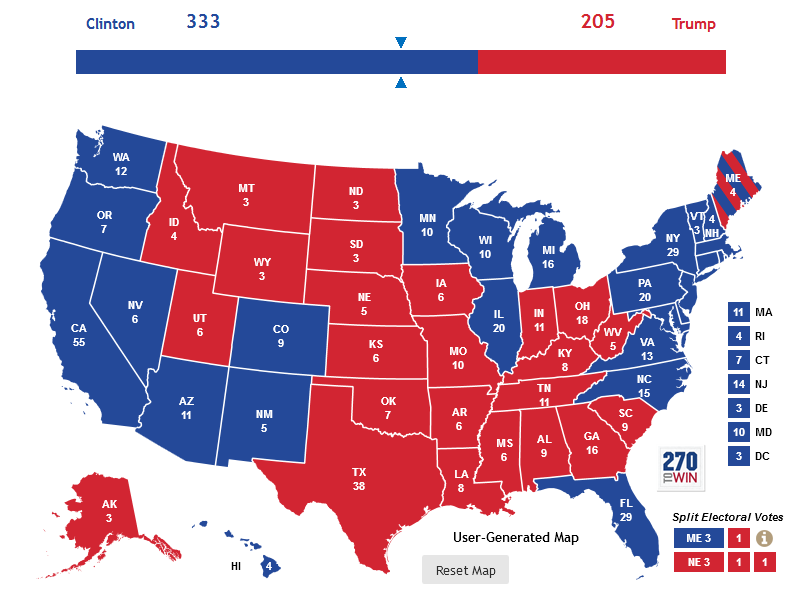 This will not be a good year for Republicans. There was only one good pick-up opportunity, two if the election season had been more favorable for Republicans. Democrats need a pick-up of four seats to win, with Kaine providing the deciding vote in a 50-50 split Senate. Nevada will be discussed below, but is likely to be a Democrat retention.

That Republicans will lose Illinois by a wide margin is practically a given at this point. This will be the fourth time in as many elections that this seat has flipped parties. In Wisconsin, Johnson has closed the gap, but it may be too little too late. Toomey is also unlikely to keep his seat.

The next two marginal seats are Indiana and New Hampshire. In New Hampshire, opinion has been split with Election Projection and RealClearPolitics poll average generally showing a GOP, while Sabato’s Crystal Ball and 538 are suggesting a Dem pickup. While Ayotte has distanced herself from Trump, a small number of die-hard Trump fans will likely doom her chances. That is a net+4 for Dems so far, and enough to give Democrats control of the Senate via Kaine’s tie-breaking vote. In Indiana, Bayh had been generally ahead until recently, but Young has surged ahead in late-breaking polls and is ahead in Sabato’s Crystal Ball, Election Projection, RealClearPolitics poll average and Nate Silver’s 638 analysis. Though Indiana will be good for Trump and Pence’s presence on the ticket will also help Republican efforts, I will go out on a limb and say that Bayh hangs on due to name recognition by low information voters.

With Florida and Arizona looking increasingly like Republican retentions, the last two marginal seats are Missouri and North Carolina. In Missouri, the race has been narrow, but the Blunt has been ahead in all but the latest poll for the past month, and he will likely win. In North Carolina, Burr has usually been polling better than his opponent, and will likely win, a Democrat pick-up here will portend an even greater Blue Wave than anticipated.

Democrats pick-up the Senate (49-49-2), with both independents caucusing with them.

Best case scenario for Republicans is if they manage to eek out wins in Wisconsin and Pennsylvania due to heavy ticket splitting, while retaining New Hampshire and Indiana, and “pulling a Heller” with an upset win in Nevada, with the later far more likely. This would result in a Republican hold of the U.S. Senate. This would give Republicans a majority of 54 to 51 seats.

On the other hand, the Democrats’ best case scenario has them additionally picking up North Carolina and Missouri, as well as getting lucky in Louisiana with the Republicans fracturing the Senate primary vote thus allowing two Dems to advance to the run-off, for a 52+2 seat majority.

The Republicans will lose a net of about a dozen seats, include big loses in California and Nevada. Whether Paul Ryan remains Speaker or not, will depend on how the House Republican caucus reacts to the election, rather than to a Democrat majority. However, if this really does become a Blue Wave of epic proportions, it’ll be known early on.

I haven’t paid as much attention to the Governor’s races, as with the other races. But it is likely that Democrats pick up Indiana and North Carolina, while Republicans pick-up Vermont in large part due to their popular Lt. Gov. running for the open seat.

The early vote will be indicative. As I have laid out with actual voter turnout by party, the Republicans will have a very, very bad night.

“The Assembly and the 4th Congressional District are lost, as expected, for at least the next two years and likely far longer. The state Senate is lost for at least the next four years, with loses in seats won in 2012, with the Republicans already holding every marginal seat up in 2018. The 3rd Congressional District is also gone for the next two years, and perhaps longer unless the Republicans choose a top tier candidate.

“The U.S. Senate seat is a toss-up, though Cortez Masto is favored. Due to the rural counties punching well above their electoral weight, Heck still has a chance if the early votes weren’t too unfavorable for him. However, the state and local Republican party central committees actively want to destroy Joe Heck; he will get no help from them… even from the rural counties that could have done the most good.”

I predict that Cortez Masto will likely win, thus denying the Republicans the chance to have decapitated all the major statewide Democratic leadership due to nearly doing so in 2014.

However, while I think it unlikely that Heck will pull of an upset, it is plausible and even potentially possible. Many things are going against Heck, including state and county Republican Central Committees who want to see Heck defeated (the Clark County Republican Central Committee came very close to officially taking that position), Heck being attacked for having endorsed Trump previously, Heck being attacked for no longer endorsing Trump (including a plethora of anonymous hit-piece mailers being sent out), and Cortez Masto not being loathed as Shelley Berkeley was when she ran against Republican Dean Heller in 2012.

Indeed, Heck’s only hope is that 2016 is a repeat of 2012, when the Republicans kept the U.S. Senate seat despite Obama winning the state, which was the only instance of that happening in the 2012 election. In Heck’s favor, he has an excellent ground game, and his familiarity in the 3rd Congressional District may still put him over the top in the Senate Race. The big question is how much the Trump Effect will hurt him. Though Republican’s narrowed the Democrats statewide active voter advantage, that was due almost entirely to a massive increase in rural voters, and the rural counties are very pro-Trump.

In the early vote in 2012, the rural counties gave the Republicans a 22,000 vote margin, and have given them a margin of 28,000 in 2016, which is about a 25% increase in raw numbers; with the rurals having giving the Republicans a ca 40,000 total vote margin in 2012, it is not impossible for the rural counties to give the Republicans at least a 50,000 vote advantage. Heck’s path to victory then is dependent on keeping the Cortez Masto’s margin in Clark County to a minimum, while winning Washoe county by enough to shrink Cortez Masto’s edge in the two urban counties to less than 50,000. Considering that Heller won the rural counties by over 50,000 votes in 2012, even with ca 80% of the total vote the rurals will be delivering in 2016, it is possible that the rurals could give him an over 60,000 margin. With the early vote being at least 2/3 of the total vote, the release of results from early and absentee voting for Clark County and Washoe County will have to be less than 40,000 net Democratic advantage for Heck to have a chance.

The 3rd Congressional District is looking to be a loss for Danny Tarkanian, who has a history of losing general and primary elections. His only hope is for Heck to have serious shirttails for the down-ballot races. This, however, is unlikely. Tarkanin needs to stop running for anything. This will be the first time since Nevada has had more than one House seat that no part of Clark County will be represented by a Republican in the House of Representatives.

In the Assembly, every single seat in Clark County they picked up in 2014 has far too great of Democratic early voter lead. Combined with the seat they picked up in Washoe, the Democrats will reverse the 2014 outcome and return to the 2012 status quo. Additionally, two seats (AD04 and AD37) that Republican’s won in both 2014 and 2012 have Democrats ahead with early voters, abet by couple to a few hundred votes. However, though less than 1/3 of the remaining vote remains, it should be sufficiently Republican leaning enough to barely carry the seats. However, if the Democrats win either seat, which they can plausibly do if the Blue Wave becomes a tsunami, they will gain a 2/3 supermajority in the Assembly. It’d be 1986 redux.

Democrats take the Assembly 27-15 and have a decent shot at a supermajority.

In the state Senate, there are three swing races: SD15 in Washoe County, and SD5 and SD6 in Clark County. Republicans won SD15, barely, and SD6 in 2012, while losing only SD5 to a well known Democrat. In 2016, it is likely they will lose all three. In SD5, Democrats increased their voter registration advantage, though by less than the Republicans margin of victory in 2012. However, the early voter lead in SD6 will likely prove to massive to overcome. To make matters worse, the Republican candidate, Victoria Seaman, has been abandoned by both the Governor and his political machine because she voted against his massive tax hike, and by the all-or-nothing anti-tax Republicans and Trump supporters for not opposing other much smaller tax hikes.

Democrats take the state Senate 12-9, and will hold it for four years, barring any unexpected vacancies filled at the 2018 mid-term.

Here, I will present three picks for dark horse candidates, where I don’t think it’ll come to pass, but for which I will not put out of the realm of possibility, and wouldn’t be totally shocked if they were to win.

* Yes, 333 is half of 666, and if Hillary runs and wins by the same Electoral College edge, her total electoral votes won will be 666…

One Response to 2016 Election Predictions