Oppressed Academics vs. the American Chimera: A Progressive Parable 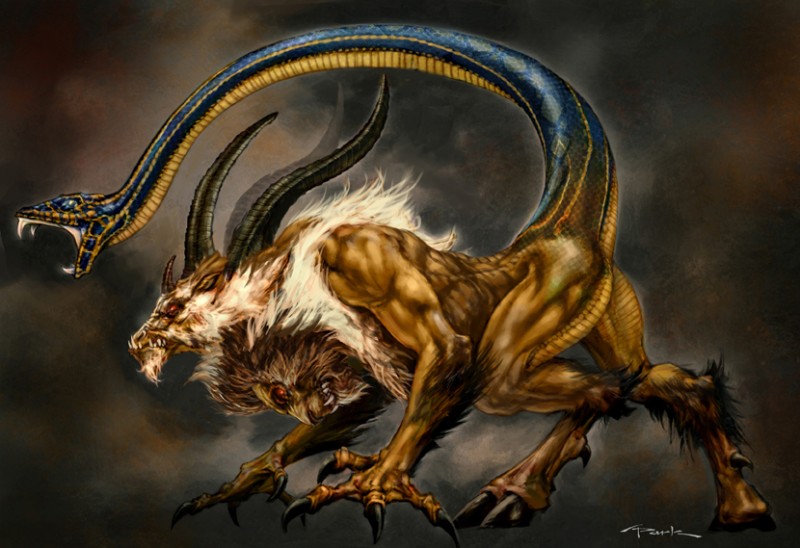 The abstract give a condensed summary of the insanity:

“In Greek mythology, the Chimera is a fire-breathing monster with three heads: one of a lion, one of a horned goat, and one of a powerful dragon. Of similar construction is the presence of three structures in US society, whiteness, patriarchy, and capitalism, which are overwhelmingly represented, valued, and espoused when examining areas of progress, i.e., family income, poverty rates, high school and college graduation rates, and home ownership.  This modern American three-headed beast controls, manipulates, and permeates all aspects of US society irrespective of class, culture, or gender. Using critical race theory and critical whiteness studies, this critically interpretive parable draws from the ways in which whiteness, patriarchy, and capitalism function in social, cultural, economic, and educational spheres.  The parable tells the story of Sue Libertad and analyzes how this metaphorical Chimera, despite its ubiquity, silently permeates all aspects of her life. Not until a tragic outbreak occurs, does the hegemony of this chimera erodes and Sue.”

Though not a word-for-word fisking, a highlight of the papers main points will be enough to cause repetitive palming of the face, or heading of the desk…

N.B. References will be omitted to provide clarity and flow of the paper, such as there is.

“Overwhelmingly valued in the US definition of ‘success’ are the three prongs of whiteness, patriarchy, and capitalism. Taken against the backdrop of family income, poverty rates, high school and college graduation rates, and home ownership, this triumvirate reigns and terrorizes, for what else more deviously controls, manipulates, and permeates all aspects of US society irrespective of class, culture, or gender?”

A good family income of a traditional Middle Class, the lifting out of poverty make possible by the free market, what used to pass for education, and the idea of property itself, are all aspects which Americans should, or that past would have, been proud of as bastions of prosperity.  But the mores and values that have made the Middle Class possible have been eroded, the free market is strangled by taxes and red tape, education has been co-opted by the Left (as this paper do aptly demonstrates), and the ability to own a house or other fine things, have all been the result of the policies and ideology of the Progressive Left.

This, of course, is their modus operandi: Blame the intentionally disastrous results of their own policies on the enemy they wish to destroy.  That they can only think in terms of organized plots and conspiracies, an example of projection if there ever was one, is telling.

“With that said, as we approach the 25th anniversary of the Derrick Bell’s seminal book Faces at the Bottom of the Well: The Permanence of Racism, we feel a stylistic obligation to pay homage to his tenacious parable/chronicle approach to racial analyses. Refusing to let his style die in race research, we describe the American Chimera through the use of a parable that utilizes critical race theory (CRT) as a theoretical lens through which to examine racism and white supremacy.”

And to do so, they invoke “magical racial realism“, which is clearly a racially tinged version of the genera known as “magical realism“.  They argue not on facts, but on putting for a fictional narrative that appeals to their target they wish to corrupt.

In justifying their justification, they out their real goal: To create excuses for hating this “American Chimera”:

“In order to problematize this ‘American Chimera’, this critically interpretive parable draws from CRT and critical whiteness studies (CWS) because these applications acknowledge the endemic nature of race and racism inside American schools and best situate the saliency of racism in education”.

For s**ts and giggles, the authors also throw in “ableism” and “heterosexism” with “racism, classism, [and] sexism” via that magical conspiratorial cabal of intersectionalism.

The article then begins storytime!

The hero of the parable, Sue Libertad, of course is a case of the authors writing themselves into the story, with Sue Libertad being an academic at a coffee house in Seattle acting like a hipster who “ironically” enjoys an old print newspaper while wearing a “United Farm Workers t-shirt and Chuck Taylor’s”.  And, of course, she (would you expect the protagonist to be an eeevil man?) sucks down a “soy latte Viennese” while obsessing over obituaries, which is far more telling of the authors disturbed mindset than American society.

Prompted by an article about a syphilis outbreak “spreading along the peculiar lines of race”, our plucky hipster heroine decides to look up here trusty former sidekick… who happens to be a man and a “shining beacon of whiteness, the model advocate representing the hope of what is possible when whites choose to give up their own privilege and stand with and not for marginalized communities.

An off-the-cuff remark about fleeing the United States due to the Tea Party conspiring to wage war against her “ovaries, pigmentation, culture, ethnicity, and citizenship” serves as a laughable attempt at some type of foreshadowing or something, while emphasizing that even Canadian universities are all run by evil microaggressing oppressors White men who just happen to specialize in “social justice”.  Because of course White male oppressors are all about publishing papers about social justice!

But what are the “peculiar lines of race” that syphilis is spreading in this outbreak?  Did you guess that it involves White people reenacting the Tuskegee Experiment, or perhaps a White-ified “Unite 731” scheme?  Nope, the targets are “Unsuspecting White Men”!   LOL Tuskegee Experiment irony!!1!

This is Nebula and Hugo award level stuff here!

But in a further twist, the “down-ass white boy” sidekick needs her help!

It turns out that this form of syphilis is being spread by White men (including a “Dr. Limbaugh”) who of course express racism and bigotry openly and without any consequences, with only White men becoming magically infected.  You see, this is a racially transmitted disease.  The “parable” is clearly trying to describe “Whiteness” as a disease that even infects the most Politically Correct “H8”-hating White people, because White men are always the problem and always the disease.

The “cure” turns out to be Prozac which stops those White men from being angry and taking it out on the oppressed by oppressively oppressing them!  Once cured, they see “the world through different eyes”.  What are those eyes?  Why the eyes of oppressed non-White immigrant women of course!  They even see each other as oppressed young girl!  Now that these eeevil White men can only see each other as oppressed young non-white girls, all the benefits of a traditional Middle Class, the lifting out of poverty make possible by the free market, what used to pass for education, and the idea of property itself magically disappear and they magically become oppressed!

Ah, but the twist here is that 80% of the eeevil White men choose blindness, because you see people who say they are “blind to race” are just oppressing people because of their race by not even noticing the existence of race.  Then it is mentioned that the drug that made this magical change in eeevil White men who now see “the world through different eyes” now contradictorily gives site back without the patient now seeing “the world through different yes”.  And of course it is all part of a plot by rich White men to maximize profits by restricting demand by an insidious corporation (despite the fact that Prozac, i.e. fluoxetine, is a generic drug that anyone can make).  These eeevil White men who pay for a drug that allows them to see without viewing “the world through different eyes”, yet are concomitantly still blind, then get Affirmative Action for themselves while living off the burden of all the Blacks, Latinos, GLBT, and other oppressed classes.

It is at this point where the parable ends: Our plucky heroine decides “f**k Whitey dudes” and declines to help those eeevil oppressors deal “with the emotional trauma of their new perspectives.

The final “twist” is that her former side-kick, the “good” White man, is going blind because all White men are oppressors!!1!

Yup, it was rather predictable.  They present a boogie-man stereotype of White men being innately evil… even the “good” ones.  The eeevil oppressors, in the face of revelation about how oppressively oppressive they are by seeing the world through the straw(wo)man of the model oppressed, yet morally pure, poor non-White girl, double-down on their oppression, thus validating their own punishment.  The authors follow with an “Analytical Discussion” which explains the preceding summary, abet with longwinded and pathetic attempt at justification for the glee expressed in White men being punished just for being White men because White men are intrinsically evil.

This is quite revealing of the Progressive mindset.  The designated villains are irredeemable, and their punishment is justified because they are by nature evil, and the oppressed are by their nature morally pure!

One of the “parallels” is the comparison of  the story’s Affirmative Action for the blind oppressors (the “Visual Rights Act of 2014” in the story) due to unearned privilege with… the G. I. Bill of rights, which was “Written under Southern auspices” as a tool of “Jim Crow” to give presumably unearned privilege to WWII veterans who just happened to be White…

And just who are these future Nebula and Hugo award winning Social Justice Warriors?

Cheryl E. Matias’s teaching focus is in Urban Community Teacher Education and her research interests include CRT, Critical Whiteness Studies, and Black feminist perspectives. She is a motherscholar of six-year-old twins.

Naomi W.M. Nishi’s teaching and research interests are in racial inclusivity, the deconstruction of Whiteness in higher education, and learning from CRT and Critical Whiteness Studies perspectives. She is the motherscholar of a two-year-old biter.

Alas, the paper was published in 2015, so future nominations to the Hugo or Nebula awards wouldn’t be possible.  But hey, maybe they can sell the story to Hollywood and make bank off of the screenplay rights!

The full article can be read below: