Begun, The Bathroom Wars Have

North Carolina has declared that men’s restrooms are for men, and women’s restrooms are for women.  This would have elicited nothing more than a “well obviously” from people in the past.  But we are experiencing “interesting times”, where “men” and “women” are defined not by objective biological reality, but by the “feelz” of a scant few who wish to force their “identities” on others… regardless of the cost.  Needless to say, the outrage that real men are supposed to use the men’s room and not the ladies’ room has been palpable and hypocritical.

Virtue-signaling hypocrite Bruce Springsteen is one example of this insanity.  He canceled a concert in North Carolina because men weren’t allowed into the ladies’ restroom.  This was so beyond the pale for him, that he had to make a moral stand; this makes it clear that he thinks that prosecuting, in the most vicious way, Gay people is totes OK, since he was happy to play in Dubai where these things tend to happen!  Bryan Adams was another virtue-signaling hypocrite who boycotted Mississippi for the same reason, and with the same hypocrisy played a concert in Egypt.  Of course for them, it’s all about the filthy lucre when they are not busy virtue-signaling… in order to get some more of that filthy, filthy lucre.

In response to this outswelling of support for men in ladies’ restroom, the city of Charlotte has illegally passed an ordinance which outlaws all sex-specific bathrooms and showers (or any other facility)!

“Any biological man – regardless of whether he ‘identifies’ or ‘expresses’ himself as a man OR as a woman – now has the legal right under the City’s amended ordinance to access the most intimate of women’s facilities (and vice versa). Under the ordinance, Charlotte businesses may no longer offer or enforce sex-specific facilities and face penalties if they do.

“Before the amendment, the public accommodations ordinance had two separate parts.

“The first part prohibited denying anyone ‘the full and equal enjoyment of the … facilities … a place of public accommodation because of race, color, religion, or national origin.’

“The second part prohibited discriminating on the basis of sex, but exempted ‘[r]estrooms, shower rooms, bathhouses, and similar facilities which are in their nature distinctly private.’

“Adding the new categories of ‘sexual orientation, gender identity and gender expression’ to the second part of the public accommodations ordinance would not have suited the objectives of radical activists to overhaul existing bathroom policy. Therefore, City Council eliminated the second part of the ordinance completely, including its bathroom and shower exemptions.

“They moved ‘sex’ to the first part and added the new classifications. So, the new language is just this:

“‘It shall be unlawful to deny any person the full and equal enjoyment of the goods, services, facilities, privileges, advantages, and accommodations of a place of public accommodation because of race, color, religion, sex, familial status, marital status, sexual orientation, gender identity, gender expression, or national origin.’

“‘This is a boneheaded blunder and a further embarrassment to Charlotte.'”

“If ‘gender identity’ and ‘gender expression’ mean that a transgender must be allowed to use the bathroom and shower of choice, then ‘sex’ means that ALL men must be permitted to use women’s facilities and vice versa. The City Attorney says that’s not what was intended, but it is what the language says.” 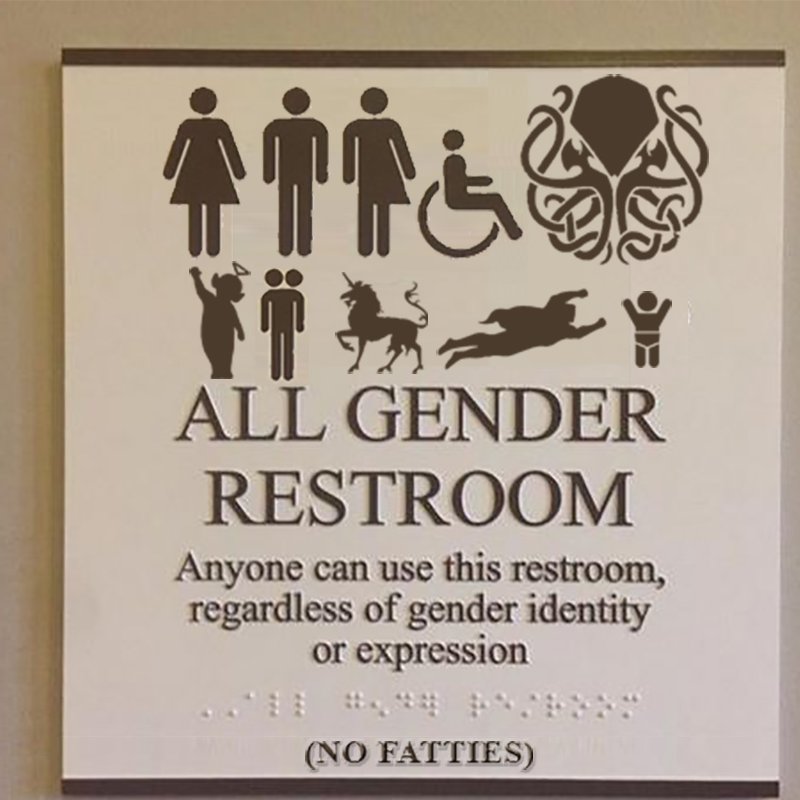 But it’s only the eeevil “Reich wing” religious nutballs who have a problem with this, right?

The crew who film the show “Transparent” about the live of “trans-people” are up in arms over “trans-friendly” toilets:

“The beef is that men, women and transgenders can all enter as they please, making it uncomfortable for some of the crew. Women are particularly worried about walking in and seeing a dude peeing at the urinal. Now this is interesting … we’re told several crew members are too scared to complain, for fear they’ll be labeled ‘transphobic,’ which would be the kiss of death on that set.”

Remind me again who has power and privilege?

But… but… attacks on children would never really happen, right?

“A sexual predator who falsely claimed to be transgender and preyed on women at two Toronto shelters was jailed indefinitely on Wednesday.

Justice John McMahon declared Christopher Hambrook — who claimed to be a transgender woman named Jessica — was a dangerous offender.”

But… but… it’s not like a city or college is actively trying to aid and abed perverts, right?

“Bookworm” of Bookworm room, perhaps, explains why giving an inch will let perverts take a mile:

“So, if true transgenders aren’t violent, if this bathroom sharing has been existing sub rosa forever, and if perverts have been using women’s bathrooms long before transgender rights became an issue, why do I still believe that it’s important that we continue our current biologically-based gender segregation in bathrooms and changing rooms? It’s important because of what I think of as the “broken windows” theory of public bathrooms.

“The ‘broken windows’ reference, obviously, goes back to a 1982 article that social scientists James Q. Wilson and George L. Kelling wrote for The Atlantic about lowering “America’s staggeringly high crime rates following the lackadaisical law enforcement in the 1970s that the hippies and their enablers insisted upon across America’s urban landscapes.  The ‘broken windows’ theory was simple: if police forces ignore little crimes, that practice begets big crimes.

“This same principle — which I think of as ‘don’t make it easy for the bad guys’ — holds true for perverts and women’s facilities. Society currently has drawn a bright line: ‘Men (meaning people with the objective indicia of the male sex), you stay out of women’s bathrooms, locker rooms, and changing areas.’

“While this long-standing rule doesn’t keep all of the perverts out, it most certainly doesn’t encourage them to come in. The proposed new rule, however, which advertises that ‘Gender is a meaningless societal construct so that you can go wherever the heck you feel you belong,’ encourages perverts. It’s a broken window. It says that it’s okay for you, the man with evil acts in his heart, to be there in the stall next to the little girl or stripping off all your clothes in the center of the women’s locker room.”

Such simple logic does not apply to the Left.  But they don’t care about logic when their faith is at stake.  As has been noted:

This entry was posted in Progressives and tagged Democrats, Gender, GOP, Kyriarchy, Social Justice, War on Women. Bookmark the permalink.

2 Responses to Begun, The Bathroom Wars Have