Peter Pan is the Progressive ideal.

Perpetual childhood of the masses is the end goal for Progressives, with most people spared having to grow up and actually run things like a responsible adult… in particular, their own lives. 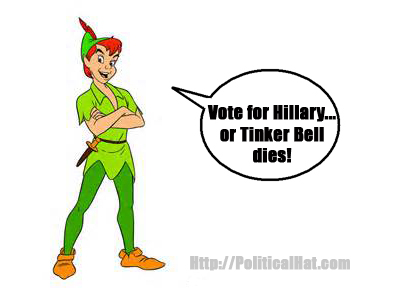 Hipsters, special little snowflakes, and other pampered adult children can now pay for the privilege of acting like they were in kindergarten again, to the tune of $1000:

Is it any surprise that so many men and women are flocking towards more radical elements of Islam?

“They have two bad choices: The culture which seems to run contrary to their impulses, generally looking down on masculine virtue, or the one which promotes a ridiculous version of masculinity as little but Warrior-Tribe aggression displays, violence, and rape. And of course some rioting, and of course some terrorism and slaughter, too.”

Yet it would seem that America, and Western Civilization, is increasingly turning into a collective of Peter Pan wannabes.

And now it looks like such idiocy might even get Federal support if Hillary Clinton has her way:

#HillaryFunCamp When you come to Hillary's, the holiday's forever! https://t.co/dJ5knVXMBE

The snark comes in from far and wide.

“It was in the fun camps that the resistance cells first formed. Linus, God rest him, stirred us to action.” pic.twitter.com/lXzqCQ2kw5

Of course, hell is the natural end state of far Left beliefs put into action.

It is a false ideology where everyone is taken care of and all one has to do is raise awareness, have fun, and make “work” and extension and expression of their being… all in a glorious utopia.  It is a Marxist ideal:

“They do some meaningful labor that everyone shares and benefits from and spend the rest of the time enjoying the meaningful labor that everyone else shares and benefits from.  Not just the labor of working at some meaningful dream job, but of a collective total existence.  They think that they can work as a barista and then spending the rest of the time doing poetry, studying Marxist philosophy, enjoying interpretive dance, &c.… all without parasitically sucking off of the trust fund set up by Mommy and Daddy.  It is the dream of eternal college and student co-op.”